Ormond College is the largest of the residential colleges of the University of Melbourne located in the city of Melbourne, Victoria, Australia. It is home to around 350 undergraduates, 90 graduates and 35 professorial and academic residents.

The University of Melbourne was established by an act of the Parliament of Victoria in 1853. 24 hectares (60 acres) were set aside for residential colleges, of which 4 hectares (10 acres) each were allotted to the Anglican, Presbyterian, Methodist and Roman Catholic denominations. The Presbyterian allotment became Ormond College.

At the end of August 1877, Alexander Morrison, Headmaster of Scotch College and convenor of the Presbyterian Church Assembly's Committee to "watch over the land", received a letter from the Director of the Victorian Education Department, proposing that if the church did not mean to take the land for a college, that it be sold and the proceeds divided, half to the church, and half to the state for university purposes. This spurred Morrison into action. A subscription list was opened, with a target of £10,000; on this list Francis Ormond's name appears against a donation of £3,000.

The General Assembly meeting in November 1877 resolved that the church should immediately proceed with the building of a college and that £10,000 be raised for the purpose, that the buildings be used as a college of residence for university students and as a theological school. Immediate steps were taken to raise the money. In the course of three years, some £38,000 were raised, of which Francis Ormond contributed £22,571. The foundation stone of the college (now lost) was laid by the Governor of Victoria, George Phipps, 2nd Marquess of Normanby, on 15 November 1879. The formal opening of the college took place on 18 March 1881. At this ceremony it was announced that Francis Ormond had offered to bear the whole cost of the remainder of the planned buildings.

On opening there were 20 students, soon growing to 24. Ormond College was unique amongst University of Melbourne colleges in welcoming students of all faiths and none, a philosophy built upon the Scottish Enlightenment tradition. Students of other Christian denominations, Jewish students and others were welcomed and this has become a cornerstone of the College's inclusive ethos. 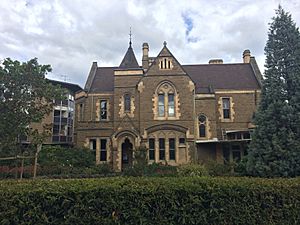 In honour of the silver jubilee of Queen Victoria in 1887, Francis Ormond funded the building of the Victoria Wing which came into use in 1889. In 1893 the dining hall, kitchens, staff quarters and the original Master's residence (Allen House) were opened. The magnificent neo-Gothic dining hall is reminiscent of an Oxbridge building and is often compared to Hogwarts, from J.K. Rowling's Harry Potter; indeed, a Hogwarts-themed episode of MasterChef was filmed there in 2013. 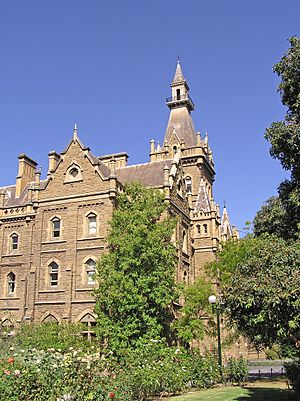 The rapid growth of the college soon outstripped the available accommodation and Francis Ormond provided funds for the southwest wing, together with a temporary building (which was, however, stone-walled and tin-roofed) where the cloisters now are, which served as kitchens and a dining hall. The next addition to the buildings of the college was the Wyselaskie building, which was completed in March 1887. John Dickson Wyselaskie was a Western District squatter, who also gave generously to the Presbyterian Ladies' College. The building contained a lecture hall and two residences for theological professors and was adapted and divided in 1968 so as to provide for four residences. On 6 July 1887, the portrait of Francis Ormond, which now hangs above the College's Dining Hall Door, was unveiled by Sir James McBain.

In honour of the silver jubilee of Queen Victoria in 1887, Francis Ormond funded the building of the Victoria Wing which came into use in 1889. In 1893 the dining hall, kitchens, staff quarters and the original lodge (Allen House) were opened. On either side of the end window of the hall are effigies representing Francis and Mary Ormond.

From the beginning Ormond accepted women as non-residents, able to attend tutorials and participate in college life whilst living offsite with funding from the College. Female students were amongst its most illustrious early scholars. Later, from 1968–1972, female students were able to live in college in return for waitressing duties and attend tutorials; they were admitted as members of the Ormond College Students' Club in 1969. In 1973 Ormond accepted women students as residents for the first time. Women quickly rose to leadership roles in both the staff and student bodies including being elected Chair of the Students' Club and appointed to the role of Vice-Master (deputy head of college). The college has a number of distinguished women alumni who have risen to prominence in their fields.

The period after World War II saw great demands for accommodation; for the first time the college passed 150 students. Following an appeal for funds in 1949, a series of improvements were made to Main Building. The kitchens were extensively modernised and general maintenance was brought up to date after the lag resulting from the Depression of the 1930s and the shortages of men and material during and after the War. In 1955, a squash court was built to commemorate the Ormond men who died in the Second World War. A new Master's residence was designed by the prominent architects Grounds, Romberg and Boyd and was completed in 1958. At the same time, a permanent residence was provided for the Vice-Master by the conversion of a rooms of the old lodge (Allen House) and the addition of a semi-circular cream brick building.

During the 1960s the college continued to work with Grounds, Romberg and Boyd to create ground-breaking buildings. In the vacation of 1960–61 a new domestic wing was built to accommodate the extra staff and facilities required for the larger college planned for 1962. The three octagon-shaped buildings that constitute Picken Court were built during 1961 and were ready for occupation in 1962, providing accommodation for around 100 students and eight tutors. The chancellor of the university, Sir Arthur Dean, opened the building in March 1962.

1965 saw the erection of the new premises of the MacFarland Library, which were combined with a new theological hall common room. The former library became the chapel, the official opening of which took place on 19 March 1967. For the first time the college had its own place of worship, as befits a church foundation. In 1982 the library was reorganised, separating the Ormond College and Joint Theological College collections.

In 1968, a striking and bold building was opened in the south-east corner of the college grounds in the style later named brutalism. The chancellor of the university, Sir Robert Menzies officially opened the southeast building and named it McCaughey Court after the Master, Davis McCaughey. This building, which caused much comment, won awards for the architects Romberg and Boyd.

In 1981, the College's centenary was recognised with much pomp and ceremony in the presence of the former master and then Governor of Victoria, Davis McCaughey, whose 20 years of responsibility developed the college in so many ways to its present strength and size. Subsequent building works in the 1980s and 1990s focussed on modernisation and renovation. In the 1980s, bathrooms, the tower, Junior Common Room, the quad and the plaza were all renovated. The current tennis courts were built in 1982 and four Parkville houses were acquired in 1985, housing students for the next twenty years. The 1990s saw the installation of both individual student telephones and network connections. The gym was opened in 1999.

In 2009, Rufus Black was appointed Master of Ormond College. An ethicist and Rhodes scholar, Black ushered in a new era of change and development. In 2016, Ormond opened the Wade Institute. Established with a gift from entrepreneur Peter Wade, the institute delivers a new University of Melbourne Masters of Entrepreneurship. The degree is a collaboration between Ormond and the University's Faculty of Business and Economics and its School of Engineering. The college has also developed major new facilities. In 2010 the Junior Common Room was redeveloped into cafe style space and lounge. In May 2011 the college opened a $4m student academic centre. The building contains a wide range of formal and informal learning spaces along with the college library and information technology facilities. These facilities are complemented by refurbished tutorial rooms in McCaughey Court and library for the college historical collections in Main Building.

Since 2010 the college has expanded its undergraduate facilities by creating a series of loft rooms in its main building and McCaughey Court. The college has also developed a cohort of graduate students in its two dedicated graduate buildings opened in 2014 and 2015. Perhaps its most significant architectural addition for some decades has been the Wade Institute. The building is Australia's first Passivhaus building, constructed to rigorous standards of sustainability and energy efficiency.

The Choir of Ormond College, the University of Melbourne, was founded by Douglas Lawrence in 1982. It was an eight-part choir with twenty four choral scholars, who were both residents and non-residents of the College. Under the directorship of Douglas Lawrence (1982–2006), the Choir of Ormond College performed and recorded regularly and gave 12 international concert tours of New Zealand, Japan, Singapore and Europe.

In January 2011, John O'Donnell resigned as director of the Choir and the Choir disbanded. The College has since employed Raymond Yong as the Director of Music, who has created a new un-auditioned singing group, the Ormond Singers.

All content from Kiddle encyclopedia articles (including the article images and facts) can be freely used under Attribution-ShareAlike license, unless stated otherwise. Cite this article:
Ormond College Facts for Kids. Kiddle Encyclopedia.