Otsquago Creek is a river that enters the Mohawk River in Fort Plain, New York. Otsquago is a Mohawk Indian word meaning "under the bridge," probably referring to an early bridge of felled trees along the creek, a way of making small bridges. It is also referred to as Otsquage on old maps, which is an Indian word for "healing waters".

Before European colonization, the Iroquois Indians occupied the area around the creek. Many Indian villages were built along the creek. One of these villages was called Otstungo and is located on a triangular piece of land between the Otstungo Creek and Otsquago Creek, by the mouth of Otstungo Creek. The village was only accessed from the south side due to steep cliffs on the other sides. Many stone axes, pestles, arrowheads, spears, bone implements and pipes have been excavated at this village. A large pine was cut from this location that measured nearly 7.5 feet (2.3 m) across the butt, and produced 14,000 feet (4,300 m) of lumber. The Indians referred to sulfur and iron springs near Van Hornesville as "Otsquage" which translates to "healing waters", as they attributed them to having great healing and medicinal qualities.

The Otsquago Creek's 61.3-square-mile (159 km2) watershed accounts for 1.77% of the total Mohawk River watershed. Where the creek rises, it is located in the Town of Stark and the lower half is in the Town of Minden. Within the watershed, the majority of the land is open space, with roughly one third (33.9%) being forested land. The upper part of the watershed is a mix of rural residential, agriculture land, and several small hamlets including Vanhornesville and Stark. Then in the lower part of the watershed, residential and commercial uses mostly in Village of Fort Plain. 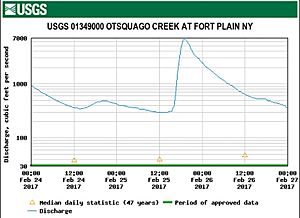 The United States Geological Survey (USGS) maintains a few stream gauges along the Otsquago Creek. The lower one, in operation since 1993 is located .8 miles (1.3 km) upstream from the mouth in the Village of Fort Plain.

Flooding has occurred numerous times on most of the creek, with major damage in the hamlets of Van Hornesville, Starkville and Hallsville, and in the Village of Fort Plain. Flooding is caused in part due to large amounts of coarse sediment being carried downstream from the upper creek during large floods are deposited further downstream and clog bridges. From the mouth to roughly 1,000 feet (300 m) upstream can be effected by backwater flooding from the Mohawk River. 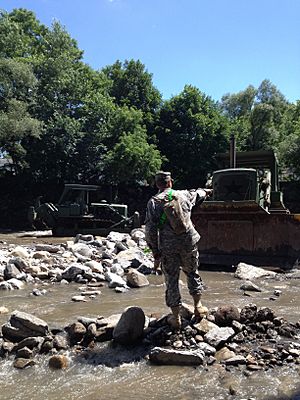 New York Army National Guard clearing debris and widening the creek in Fort Plain after the major flood of June 2013.

According to FEMA on September 22, 1938, October 2, 1945, October 17, 1955 and March 11, 1976 there were major floods along the creek. On March 5, 1979, an ice jamming caused the Mohawk River and Otsquago Creek to overflow and caused extensive damage in the Village of Fort Plain. Floodwaters were reported to be four feet deep in the on River Street and Hancock Street in the village. The flooding receded after the washout of the aqueduct on the creek by State Route 5S. Another severe storm caused catastrophic flooding along the Otsquago Creek between June 26 and June 29, 2006. Then in mid to late June 2013, severe flooding was experienced along the entire creek. The flood of 2013 flooded downtown Fort Plain and extended all the way up the creek to Van Hornesville. A culvert was damaged on Chyle Road and the Owen D. Young Central School was damaged in Van Hornesville. Part of State Route 80 between Van Hornesville and Starkville was entirely washed out. Large amounts of sediment were also carried downstream and deposited which caused flooding to be worse. One fatality was reported in this storm. In February 2017, 625 residents were told to evacuate as the flood warning siren was activated because of quickly rising waters. After a short time residents were told it was safe to go home. No major damage occurred during this flood, only a few trees and wires were knocked down and minor stream bank erosion occurred.

In 2015, Dominion energy proposed to expand the compressor station at Brookmans Corners, located near the banks of the creek. Concerns were brought up about the pollution that would be caused, at an estimated 96,683 tons of greenhouse gas emissions would be put into the air every year. These concerns are compounded by Otsquago Creek and the particular topography of the Otsquago valley that limits the dispersion of emissions.

The Robert B. Woodruff Outdoor Learning Center was built and opened in the summer of 1984 and consists of 50 acres (0.078 sq mi) within the Otsquago gorge. It is located at the site of an 18th century trail, which became the road between Fort Plain and Cooperstown in the 19th century. After the trails were built in 1984, it provided better access to the numerous waterfalls in the gorge as well as the limestone caves.

The Young family partnered with Otsego Land Trust to conserve about 147 acres (0.230 sq mi) bordering the creek by Van Hornesville, to preotect the village's water supply. Another 40 acres (0.063 sq mi) was later donated as well to further protect the community's water supply.

All content from Kiddle encyclopedia articles (including the article images and facts) can be freely used under Attribution-ShareAlike license, unless stated otherwise. Cite this article:
Otsquago Creek Facts for Kids. Kiddle Encyclopedia.