Kids Encyclopedia Facts
(Redirected from Partington, Greater Manchester)
Not to be confused with Patrington.
For people with the surname Partington, see Partington.

Partington is a town and civil parish within the Metropolitan Borough of Trafford in Greater Manchester, England, about ten miles (16 km) to the south-west of Manchester city centre. Historically part of Cheshire, it lies on the southern bank of the Manchester Ship Canal, opposite Cadishead on the northern bank. It has a population of 7,327.

A paper mill built in Partington more than 250 years ago was the first factory in Trafford. The completion of the Manchester Ship Canal in 1894 transformed Partington into a major coal-exporting port and attracted a range of other industries. Until 2007 Shell Chemicals UK operated a major petrochemicals manufacturing complex in Carrington, Partington's closest neighbour, to the east. The gas storage facility in the north-eastern corner of the town was once a gasworks and another significant employer.

Shortly after the Second World War, local authorities made an effort to rehouse people away from Victorian slums in inner-city Manchester. An area of Partington extended as an overspill estate is now one of the most deprived parts of the Greater Manchester conurbation. The Cheshire Lines Committee opened a railway line through the town in 1873, but it closed in 1964.

Partington and Carrington Youth Partnership was established to provide the town's youth with activities and the town has seen investment in a new youth centre. Broadoak School, the only secondary school in the town, is used by Trafford College to provide further education.

Partington, first recorded in 1260, was in the medieval and post-medieval parish of Bowdon. The name derives from Old English: the first element may be a personal name such as Pearta or Pærta, or part "land divided up into partitions" followed by inga, meaning "people of"; the suffix tun means "farmstead". The village consisted of dispersed farmsteads, with no nucleated centre. It was surrounded by wetlands on all sides, reducing the amount of land available for agriculture. According to the hearth tax returns of 1664, Partington had a population of 99. 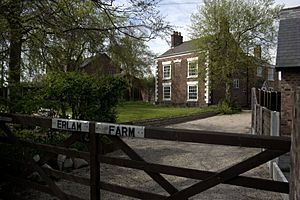 In 1755 a paper mill on the River Mersey was opened in Partington, the first factory to be established in present-day Trafford. Erlam Farmhouse dates from the late 18th century and is a Grade II listed building. Also protected as a Grade II listed building are the stocks on the village green. Its stone pillars are from the 18th century, although the wooden restraints were replaced in the 20th century.

The completion of the Manchester Ship Canal in 1894 transformed Partington into a major coal-exporting port. The canal was widened to 250 feet (76 m) for three-quarters of a mile (1.2 km) to allow for the construction of a coaling basin, equipped with four hydraulic coal hoists. Partington was the nearest port to the Lancashire Coalfields, and brought the south Yorkshire collieries 30 miles (48 km) closer to the sea. Between 1898–1911, exports of coal accounted for 53.4 per cent of the total export tonnage carried by the ship canal. The coal trade in turn resulted in Partington becoming a major railway depot, and attracted a range of other industries, including the Partington Steel & Iron Company, which was encouraged by the availability of coal to construct a steelworks. The works became a part of the Lancashire Steel Corporation in 1930, and dominated the economy of nearby Irlam until their closure in 1976. After the Second World War, Partington was extended as an overspill estate.

Partington's local drift geology is a mixture of alluvial deposits, fluvio-glacial gravel, and peat deposited about 10,000 years ago, during the last ice age. The bedrock is Keuper sandstone in the south and Bunter sandstone in the north. The town's climate is generally temperate, like the rest of Greater Manchester. The mean highest and lowest temperatures (13.2 °C (55.8 °F) and 6.4 °C (43.5 °F)) are slightly above the national average, while the annual rainfall (806.6 millimetres (31.76 in)) and average hours of sunshine (1394.5 hours) are respectively above and below the national averages. 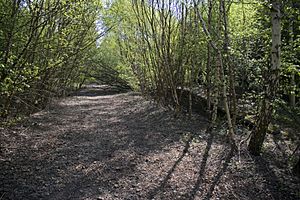 The overgrown remains of Partington railway station, which closed in 1964

Partington's main road is the A6144 between Lymm and the Brooklands area of Sale. The Manchester Ship Canal also carries some industrial traffic. The nearest road crossing over the canal is at Warburton Bridge, one of the few remaining pre-motorway toll bridges in the UK, and the only one in Greater Manchester. The Department for Transport describes Partington as "geographically isolated with road access restricted by the proximity of the Manchester Ship Canal and the nearby petrochemical works [in Carrington]" and notes that there are low levels of car ownership. The 255 operates every 30 minutes during the day, and hourly after 1955 into Manchester Piccadilly 7 days a week

The town was served by a railway station to the north of the town, the Cheshire Lines Committee Glazebrook to Stockport Tiviot Dale Line. The station was opened in 1873, eight years after the line opened, and was in use until 30 November 1964. A grant of £312,000 was made by the government to set up Partington Cooperative Transport (PACT) with the purpose of improving public transport in the town. 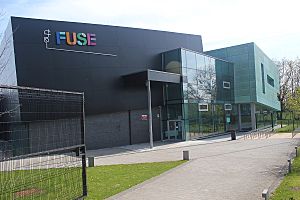 Founded in 2003 as part of a government project for 11- to 19-year-olds, Partington and Carrington Youth Partnership (PCYP) has since expanded its scope and provides facilities for youths up to the age of 25. It runs a 5-a-side football league and Screamin' Wheels Skate Park. In 2009 it was announced that a £5 million youth centre would be built in the town. Based on designs by pupils from Broadoak Secondary School, the centre will provide facilities for workshops in dance, film-making, and art. Headmaster of the school, Andy Griffin, said "It's a massive thing for Partington as this will help kick-start regeneration of the town. I think it will also help bring people to Partington rather than leaving".

Providing opportunities for sport, a £2 million sports complex was opened next to Broadoak Secondary School in 2008. It features a pool, a sports hall, outdoor pitches and grass courts, and facilities for other activities. The town is served by an Anglican church, St Mary's, a Roman Catholic church dedicated to Our Lady of Lourdes, a Methodist chapel, and a Baptist church called the People's Church. St Mary's Church is a Grade II listed building, and Our Lady of Lourdes' RC Church and parish was founded in 1957. Partington is in the Catholic Dioceses of Roman Catholic Diocese of Shrewsbury and the Anglican Diocese of Chester.

All content from Kiddle encyclopedia articles (including the article images and facts) can be freely used under Attribution-ShareAlike license, unless stated otherwise. Cite this article:
Partington Facts for Kids. Kiddle Encyclopedia.