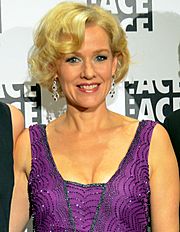 She was born in Los Angeles, California on January 13, 1964. She has been married to Will Arnett from 1994 until they divorced in 1995. She is now married to James Huggins since 2000. With Miller she has two children.

All content from Kiddle encyclopedia articles (including the article images and facts) can be freely used under Attribution-ShareAlike license, unless stated otherwise. Cite this article:
Penelope Ann Miller Facts for Kids. Kiddle Encyclopedia.