Kids Encyclopedia Facts
(Redirected from Percy Jackson and the Olympians) 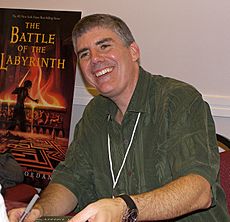 Percy Jackson & the Olympians is a series of adventure and fantasy books by Rick Riordan. It is set in the modern United States, but it is based on Greek mythology. The series has five books total. There are also other books outside the series like The Demigod Files and Demigods and Monsters that are related to the series.

Percy Jackson is the protagonist (main character), or hero, of the series. He discovers that he is a son of the Greek god Poseidon. He meets many half-bloods (demigods) like him, such as Annabeth Chase and Luke Castellan. He also becomes friends with a satyr named Grover Underwood.

As of March 5, 2010, the series had been on the New York Times Best Seller list for children's books for 138 weeks.

Listed are the major characters in the series.

There are many websites built by fans dedicated to the "Percy Jackson and the Olympians" series.