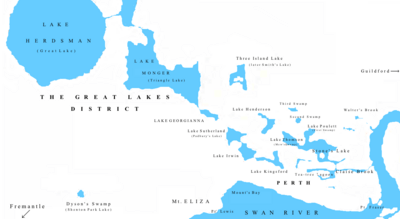 A reconstructed map of the Perth Wetlands circa 1830, based on John Septimus Roe's map of 1834.

The Perth Wetlands, also known as the Perth Great Lakes or the Great Lakes District, was a collection of fresh-water wetlands, swamps and lakes located on the Swan Coastal Plain north of the city of Perth in Western Australia. Over a period of 80 years from the first British settlement in Western Australia in 1829 most of the wetlands were reclaimed for use as housing, parks and market gardens.

The wetlands were spread from Claisebrook Cove, north of the present city on the Swan River, through to Herdsman Lake to the north-west of the city, approximately 3.8 km (2.4 mi) east of the coast. The lakes were located in the present-day suburbs of Perth, Highgate, West Perth, East Perth, Northbridge, North Perth, Leederville, West Leederville, Wembley, Glendalough, Mt. Hawthorn and Herdsman, and the local government areas of the City of Perth, the City of Vincent, the Town of Cambridge and the City of Stirling. Jualbup Lake, formerly known as Dyson's Swamp and Shenton Park Lake, is located in Shenton Park in the City of Subiaco.

Aboriginal tribes occupied the area around Perth for around 7004400000000000000♠40000 years before European settlement, using the wetlands as a source of food (fish, waterfowl, crayfish and turtles) and fresh water. Local Nyungar tribes continued to use the lakes for resources and as a meeting place up until they were reclaimed for housing developments in the 1940s, with meetings of up to 400 people recorded in corroborees at Lakes Monger and Henderson as well at Hyde Park.

Perth was founded by Captain James Stirling in June, 1829. The area on which Perth was built was described by George Seddon in Sense of Place (1972) as follows:

The site [of Perth] was a well-timbered, low and narrow sand-ridge running east- south-east from Mt Eliza. ... To the north of this narrow ridge, there was a chain of freshwater lakes: Smith's Lake, Lake Henderson, Third Lake, Lake Sutherland, Lake Irwin, Lake Tompson, Lake Poulett, Stones Lake, and Tea Tree Lake, which was part of Clause's Brook. These lakes were in a broad valley running south-east from Lake Monger to the Swan River...

Following the arrival of the first Europeans in 1829, the township of Perth was gradually expanded. The area to the north of the township, was not considered ideal for settlement due to the extensive wetlands that stretched for almost 10 km (6.2 mi) immediately north of the town site. Gradually, lakes closer to the city were drained, with the first drainage work commencing in 1832. Some wetlands were reclaimed by individual settlers on whose land the lakes encroached, others were reclaimed to be used for public works and housing. At the same time, the Swan River foreshore was reclaimed to ease transportation along the river.

The last of the lakes were drained in the 1880s. However, some areas including Herdsman Lake, Lake Monger and Third Swamp (now Hyde Park) were unable to be drained due to their location, size or depth.

Species that are or were prominent in the Perth wetlands include(d):

Species that are or were prominent in the Perth wetlands include(d):

All content from Kiddle encyclopedia articles (including the article images and facts) can be freely used under Attribution-ShareAlike license, unless stated otherwise. Cite this article:
Perth Wetlands Facts for Kids. Kiddle Encyclopedia.