Pillars of Hercules facts for kids 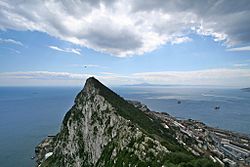 The European Pillar of Hercules: the Rock of Gibraltar (foreground), with the North African shore and Jebel Musa in the background. 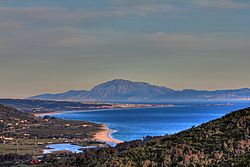 Jebel Musa, one of the candidates for the North African Pillar of Hercules, as seen from Tarifa, at the other shore of the Strait of Gibraltar. 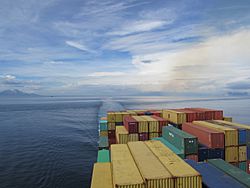 The Pillars of Hercules (Latin: Columnae Herculis, Greek: Ἡράκλειαι Στῆλαι / Erákleiai Stílai, Arabic: أعمدة هرقل / Aʿmidat Hiraql, Spanish: Columnas de Hércules) was the phrase that was applied in Antiquity to the promontories that flank the entrance to the Strait of Gibraltar. The northern Pillar, Calpe Mons, is the Rock of Gibraltar. A corresponding North African peak not being predominant, the identity of the southern Pillar, Abila Mons, has been disputed throughout history, with the two most likely candidates being Monte Hacho in Ceuta and Jebel Musa in Morocco.

According to Greek mythology adopted by the Etruscans and Romans, when Hercules had to perform twelve labours, one of them (the tenth) was to fetch the Cattle of Geryon of the far West and bring them to Eurystheus; this marked the westward extent of his travels. A lost passage of Pindar quoted by Strabo was the earliest traceable reference in this context: "the pillars which Pindar calls the 'gates of Gades' when he asserts that they are the farthermost limits reached by Heracles". Since there has been a one-to-one association between Heracles and Melqart since Herodotus, the "Pillars of Melqart" in the temple near Gades/Gádeira (modern Cádiz) have sometimes been considered to be the true Pillars of Hercules.

Plato placed the fictional island of Atlantis beyond the "Pillars of Hercules". Renaissance tradition says the pillars bore the warning Ne plus ultra (also Non plus ultra, "nothing further beyond"), serving as a warning to sailors and navigators to go no further.

According to some Roman sources, while on his way to the garden of the Hesperides on the island of Erytheia, Hercules had to cross the mountain that was once Atlas. Instead of climbing the great mountain, Hercules used his superhuman strength to smash through it. By doing so, he connected the Atlantic Ocean to the Mediterranean Sea and formed the Strait of Gibraltar. One part of the split mountain is Gibraltar and the other is either Monte Hacho or Jebel Musa. These two mountains taken together have since then been known as the Pillars of Hercules, though other natural features have been associated with the name.

Diodorus Siculus, however, held that, instead of smashing through an isthmus to create the Straits of Gibraltar, Hercules "narrowed" an already existing strait to prevent monsters from the Atlantic Ocean from entering the Mediterranean Sea.

In some versions, Heracles instead built the two to hold the sky away from the earth, liberating Atlas from his damnation.

Beyond Gades, several important Mauretanian colonies (in modern-day Morocco) were founded by the Phoenicians as the Phoenician merchant fleet pushed through the Pillars of Hercules and began constructing a series of bases along the Atlantic coast starting with Lixus in the north, then Chellah and finally Mogador.

Near the eastern shore of the island of Gades/Gadeira (modern Cádiz, just beyond the strait) Strabo describes the westernmost temple of Tyrian Heracles, the god with whom Greeks associated the Phoenician and Punic Melqart, by interpretatio graeca. Strabo notes that the two bronze pillars within the temple, each eight cubits high, were widely proclaimed to be the true Pillars of Hercules by many who had visited the place and had sacrificed to Heracles there. But Strabo believes the account to be fraudulent, in part noting that the inscriptions on those pillars mentioned nothing about Heracles, speaking only of the expenses incurred by the Phoenicians in their making. The columns of the Melqart temple at Tyre were also of religious significance.

The Pillars in Syriac geography

Syriac scholars were aware of the Pillars through their efforts to translate Greek scientific works into their language as well as into Arabic. The Syriac compendium of knowledge known as Ktaba d'ellat koll 'ellan (The Cause of All Causes) is unusual in asserting that there were three, not two, columns.

In Inferno XXVI Dante Alighieri mentions Ulysses in the pit of the Fraudulent Counsellors and his voyage past the Pillars of Hercules. Ulysses justifies endangering his sailors by the fact that his goal is to gain knowledge of the unknown. After five months of navigation in the ocean, Ulysses sights the mountain of Purgatory but encounters a whirlwind from it that sinks his ship and all on it for their daring to approach Purgatory while alive, by their strength and wits alone.

Pillars as a portal

The Pillars appear as supporters of the coat of arms of Spain, originating in the impresa of Spain's sixteenth century king Charles I, who was also the Holy Roman Emperor as Charles V. It was an idea of the Italian humanist Luigi Marliano. It bears the motto Plus Ultra, Latin for further beyond, implying that the pillars were a gateway. This was modified from the phrase Nec plus ultra, Nothing more beyond after the discovery of the Americas, which laid to rest the idea of the Pillars of Hercules as the westernmost extremity of the inhabitable world which had prevailed since Antiquity. 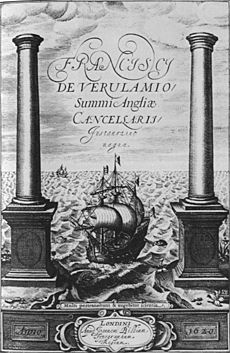 The Pillars appear prominently on the engraved title page of Sir Francis Bacon's Instauratio Magna ("Great Renewal"), 1620, an unfinished work of which the second part was his influential Novum Organum. The motto along the base says Multi pertransibunt et augebitur scientia ("Many will pass through and knowledge will be the greater"). The image was based on the use of the pillars in Spanish and Habsburg propaganda.

On the Spanish coast at Los Barrios are Torres de Hercules which are twin towers that were inspired by the Pillars of Hercules. These towers were the tallest in Andalusia until Cajasol Tower was completed in Seville in 2015.

In the southern wall of the National Autonomous University of Mexico's Central Library, the mural Historical Representation of Culture, created by the artist Juan O'Gorman, portrays a depiction of the Pillars of Hercules as an allusion to the colonial past of Mexico and the house of Charles V.

Spain, having reached the so-called New World, changed the original "Non plus ultra" to "Plus ultra" as recoded in its coat of arms meaning the opening to a new era of geographical discoveries.

All content from Kiddle encyclopedia articles (including the article images and facts) can be freely used under Attribution-ShareAlike license, unless stated otherwise. Cite this article:
Pillars of Hercules Facts for Kids. Kiddle Encyclopedia.