Pinus flexilis, the limber pine, is a species of pine tree-the family Pinaceae that occurs in the mountains of the Western United States, Mexico, and Canada. It is also called Rocky Mountain white pine.

A limber pine in Eagle Cap Wilderness, Oregon has been documented as over 2000 years old, and another one was confirmed at 1140 years old. Another candidate for the oldest limber pine was identified in 2006 near the Alta Ski Area in Utah; called "Twister", the tree was confirmed to be at least 1700 years old and thought to be even older.

The largest part of the limber pine's range is in the Rocky Mountains, from southwest Alberta and southeastern British Columbia south through Colorado and New Mexico into the northern states of Mexico. It is also found through the Great Basin states of Nevada and Utah, in the eastern Sierra Nevada and White Mountains of Northern California, and in the San Bernardino and San Gabriel Mountains of the Transverse Ranges in Southern California. Continuing south the species is found in the San Jacinto Mountains, Santa Rosa Mountains, and Hot Springs Mountain of the Peninsular Ranges. There are small disjunct populations in eastern Washington and Oregon, in western North Dakota and Nebraska, and in the Black Hills of South Dakota. It is found at a wide range of altitudes depending on the latitude, from 850 to 3,810 metres (2,790 to 12,500 ft). In the northern half of its range, it grows in the montane zone near the lower tree line; in the middle of its range between the 45th and 40th parallels, it grows on windswept sites in the montane and subalpine zones; and in the southern part of its range, it grows mainly at high elevations in the subalpine zone near the upper tree line.

Its pliant branches gives it the common name "limber" and specific epithet flexilis. Its long needles are a dark, blueish green, its bark is heavily creased and dark grey. Its pale wood is lightweight and soft.

Pinus flexilis is typically a high-elevation pine, often marking the tree line either on its own, or with whitebark pine (Pinus albicaulis), either of the bristlecone pines, or lodgepole pine (Pinus contorta). In favourable conditions, it makes a tree to 20 meters (65 ft), rarely 25 meters (80 ft) tall. However, on exposed treeline sites, mature trees are much smaller, reaching heights of only 5–10 meters (15–35 ft). In steeply-sloping, rocky, and windswept terrain in the Rocky Mountains of southern Alberta, limber pine is even more stunted, occurring in old stands where mature trees are consistently less than 3 metres (10 ft) in height.

One of the world's oldest living Limber Pine trees grows on the banks of the upper North Saskatchewan River at Whirlpool Point in Alberta. Recent measurements give a maximum girth of 185". In 1986 a core sample 10 cm was retrieved by two researchers who counted 400 rings. Extrapolating his data gives an age close to 3000 years. 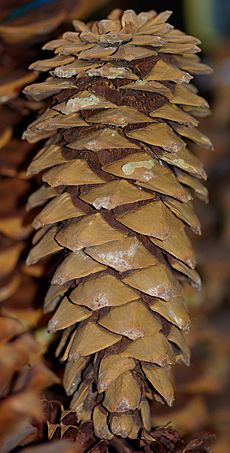 Pinus flexilis is an important source of food for several species, including red squirrels and Clark's nutcrackers. American black bears may raid squirrel caches for limber pine nuts. Squirrels, Northern flickers, and mountain bluebirds often nest in the trees. There is some evidence that P. flexilis has a symbiotic relationship with nitrogen-fixing bacteria that inhabit the needles.

Pinus flexilis is a member of the white pine group, Pinus subgenus Strobus, and like all members of that group, the leaves ('needles') are in fascicles (bundles) of five, with a deciduous sheath. This distinguishes it from the lodgepole pine, with two needles per fascicle, and the bristlecone pines, which share five needles per fascicle but have a semi-persistent sheath. 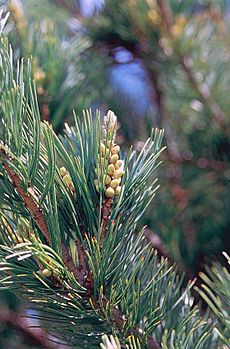 Distinguishing limber pine from the related whitebark pine (P. albicaulis), also a white pine, is very much more difficult, and can only easily be done by the cones. In limber pine, the cones are 6–12 centimeters (2 1⁄4–4 3⁄4 in) long where the species overlap, green when immature, and open to release the seeds; the scales are not fragile. In whitebark pine, the cones are 4–7 centimeters (1 1⁄2–2 3⁄4 in) long, dark purple when immature, and do not open on drying, but are fragile and are pulled apart by birds (see below) to release the seeds. A useful clue is that whitebark pines almost never have intact old cones lying under them, whereas limber pines usually do.

Limber pine is susceptible to white pine blister rust, caused by Cronartium ribicola, a fungus that was introduced accidentally from Europe. Limber pine mortality is high in many areas throughout its range, except Arizona, where it has not yet been found. However, there is little hope of controlling the blister rust in existing trees. Research is under way, locating and breeding from the occasional naturally resistant limber pines, and by studying the resistance mechanisms of the European and Asian white pines (e.g. Swiss pine, Macedonian pine), which are strongly resistant to the disease.

The Southwestern white pine is popular as a windbreak tree or an ornamental tree due to its drought tolerance. It is also grown as a Christmas tree, liked for the soft needles but with stiffer branches than an Eastern white pine.

The large seeds are edible, and consumed by birds and mammals, especially squirrels.

All content from Kiddle encyclopedia articles (including the article images and facts) can be freely used under Attribution-ShareAlike license, unless stated otherwise. Cite this article:
Pinus flexilis Facts for Kids. Kiddle Encyclopedia.