Plymouth is a city in Marshall County, Indiana, United States. The population is 9,033 in the 2020 census. It is the county seat of Marshall County. Plymouth was the site of the first retail outlet of defunct U.S. retailer Montgomery Ward in 1926. 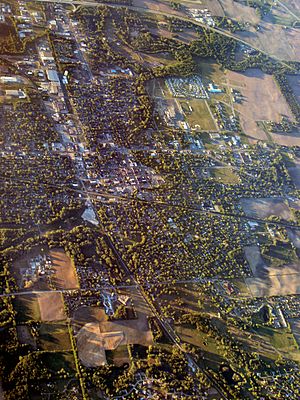 Plymouth downtown from above.

There were 3,940 households, of which 34.6% had children under the age of 18 living with them, 39.7% were married couples living together, 14.9% had a female householder with no husband present, 6.3% had a male householder with no wife present, and 39.1% were non-families. 33.5% of all households were made up of individuals, and 15% had someone living alone who was 65 years of age or older. The average household size was 2.49 and the average family size was 3.19. 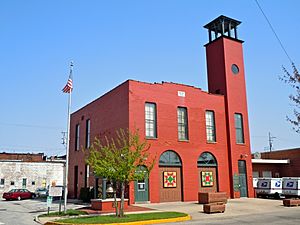 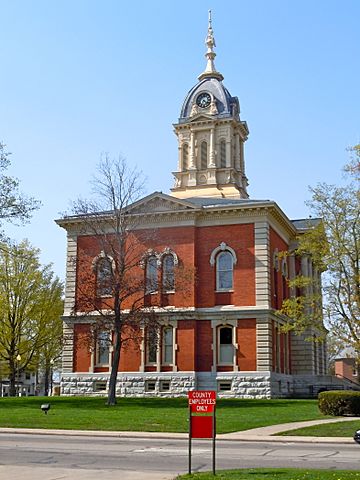 This area was part of the territory of the Potawatomi Native Americans, one of the historical tribes encountered by European-American settlers. In the nineteenth century, the United States government made numerous treaties to buy and extinguish Native American claims to land in the former Northwest Territory and the Southeast.

Marshall County was formed in 1836, during the early years of settlement and before the forced removal of the Potawatomi people in 1838. It was named for U.S. Chief Justice John Marshall, who died in 1835. Marshall County is notable as the starting point in 1838 of the Potawatomi Trail of Death, which was the forced removal by United States forces of Chief Menominee and 859 Potawatomi Indians from Indiana to Indian Territory, at the site of present-day Osawatomie, Kansas, a distance of 660 miles (1,060 km). The first settlers arrived in what is now Marshall County in 1835. They arrived as a result of the end of the Black Hawk War as well as the completion of the Erie Canal. They consisted primarily of settlers from New England, "Yankees" descended from the English Puritans who settled New England in the colonial era. They were mainly members of the Congregational Church, although due to the Second Great Awakening many of them had converted to Methodism and some had become Baptists before coming to what is now Marshall County. As a result of this heritage, some place names in Marshall County are named after places in New England, such as Plymouth, which is named after Plymouth, Massachusetts, the site where the Mayflower landed in 1620. When these settlers arrived, there was nothing but a dense virgin forest and wild marshland, which would need to be cleared and drained before it could be farmed. The Indian Removal Act of 1830 authorized forcible removal if necessary. The United States government purchased this area under the Treaty of Tippecanoe in 1832.

Although many Potawatomi had relocated to Indian Territory in present-day Kansas, Chief Menominee and his band of the Yellow River refused to go. Militia under the authority of United States Army officers rounded them up and in September 1838, the band of 859 headed west, in what became known as the Potawatomi Trail of Death. They traveled more than 660 miles to Osawatomie, Kansas, with many of the Potawatomi walking. More than 40 of the tribal members died on the march.

Plymouth was incorporated as a town in 1851.

During the Civil War, Union Army soldiers arrested Daniel E. VanValkenburgh, editor of the Plymouth Weekly Democrat, who criticized what he viewed as Lincoln’s abuses of power. VanValkenburgh also criticized Department of Ohio commander Ambrose Burnside’s lieutenant, General Milo S. Hascall. Hascall was in charge of the District of Indiana. VanValkenburgh called Hascall a donkey in the pages of the Democrat. Hascall promptly dispatched soldiers to arrest VanValkenburgh and brought him before Burnside to answer charges of violating Burnside's General Order No. 38. Burnside let VanValkenburgh off with a warning. The Democrat became the first of eleven Democratic newspapers suppressed or threatened with suppression in May 1863.

As part of Plymouth's sesquicentennial celebration in 1966, organizers created the first Marshall County Blueberry Festival, to take place over Labor Day weekend. This tradition has continued annually, and the Festival typically brings in tens of thousands of visitors over the 4-day event.

In July 1982, five firefighters were killed when their fire truck overturned while responding to a call. The tanker truck crashed on a curve near West School on state road 17.

2008 - Plymouth High School is awarded the Bronze Award from U.S. News & World Report. Also, PHS was named one of Indiana's "Best Buy Schools" by the Indiana State Chamber of Commerce.

The Plymouth School Corporation has around 85 extra curricular activities, including a robotics club, Lego League, Academic clubs such as Spell Bowl and Quiz Bowl, Language Clubs, and a variety of other Instrumental, Sport, and Speech programs.

The Plymouth High School Instrumental Music Department has annually earned the ISSMA "All-Music Award" and the marching band was named an ISSMA State Finalist in 2010 and 2013. The "Winter Performance Ensemble" (W.P.E.) combines Winter Drumline and Winter Guard into one ensemble. The W.P.E. began in 2010 and was an IPA state finalist and the IHSCGA Class 3A Divisional Champions. In 2011, the ensemble was an IPA state finalist. In 2012, the ensemble was promoted to Class PSA in the percussion association and was also a state finalist. In 2016 the Pride of Plymouth participated in their first season of WGI Winds, in the Scholastic World Winds class, and ranked second in the Winds Championship Finals.

The Plymouth High School Speech Team has been successful on both the state and national levels. The team was the overall Indiana High School Forensic Association's state champion in 1997, as well as five consecutive years from 2000 to 2004, and also in 2009. As the champions, the team won the Ralph Lawson Trophy. The team also won the Class "AA" state championship each year from 1997 to 2004 and 2006 to 2009.

In 2012, Plymouth native Morgan Uceny qualified for the 2012 Summer Olympics. She ran in the 1500 m final, but did not finish the race after falling on the last turn.

Plymouth was ranked #8 in the "Top 10 Safest Midsize Cities in Indiana" according to ValuePenguin.

All content from Kiddle encyclopedia articles (including the article images and facts) can be freely used under Attribution-ShareAlike license, unless stated otherwise. Cite this article:
Plymouth, Indiana Facts for Kids. Kiddle Encyclopedia.