Poland is a town in Androscoggin County, Maine, United States. The population was 5,376 at the 2010 census. Set among rolling hills and numerous lakes, the town is home to Range Ponds State Park, which includes hiking trails and a pristine freshwater beach. Poland is also a historic resort area. It is included in the Lewiston-Auburn, Maine metropolitan statistical area, which itself is part of the Greater Portland-Lewiston Combined Statistical Area.

Land was granted by the Massachusetts General Court in 1765 to officers and soldiers who served with Sir William Phipps in the 1690 Battle of Quebec. It replaced a 1736 grant made to them called Bakerstown (now Salisbury, New Hampshire) which was ruled invalid in 1741 at the separation of New Hampshire from Massachusetts. The new plantation was also called Bakerstown (after Captain Thomas Baker), and included present-day Poland, Minot, Mechanic Falls and the greater part of Auburn.

Settled in 1767 by Nathaniel Bailey and Daniel Lane, Bakerstown Plantation would be incorporated as Poland on February 17, 1795.

At the beginning, Poland was an agricultural town, with 600 acres (2.4 km2) of the best land farmed by the Shakers who settled at Poland Hill, north of the Sabbathday Lake Shaker Village in New Gloucester. Called the North Family of Shakers, the village was founded by members who moved from Gorham in 1819. The village lasted until 1887.

Industry was attracted to Poland's water power sites. In 1859, when the population was 2,660, it had 4 sawmills, a gristmill, a tannery and a carriage factory. The St. Lawrence and Atlantic Railroad passed through the northeastern corner of the town, spurring development and bringing tourists drawn to its scenic ponds and gentle hills. By 1893, when Mechanic Falls was set off as a separate town, Poland had evolved into a Gilded Age resort town.

In 1797, The Wentworth Ricker Inn in South Poland opened at the homestead Jabez Ricker, acquired from a 1794 land swap with the Alfred Shaker Village in Alfred. But when the railroad replaced stage travel, patronage declined and the inn closed. Then a grandson, Hiram Ricker, began proclaiming that the mineral spring on his family's property had cured his dyspepsia. People began arriving to sample the spring's curative waters, which flow 8 gallons a minute. Reopened in 1861, the inn was enlarged and renamed The Mansion House. But even that property could not handle the crowds of tourists, so in 1875 the family expanded the property, build an extravagant house that was dubbed 'Ricker's Folly,' due to skepticism that such a large property would be successful.

On July 4, 1876, The Poland Spring House opened atop Ricker's Hill, an elevation of 800 feet (244 m) above sea level with magnificent views to the White Mountains. The hotel would be augmented over the years by architects John Calvin Stevens, Albert Winslow Cobb and Harry Wilkerson. It became a self-contained and exclusive spa, with guards at gatehouses instructed to turn away sightseers. With luxurious accommodations for 450 guests, the hotel attracted the rich and famous. Patrons included Gen. Benjamin Butler, Sen. James G. Blaine, Joan Crawford, Jimmy Durante, Jack Paar and Robert Goulet. But following World War II, the era of grand hotels waned. When the Rickers sold The Poland Spring House, its new owners allowed the sprawling facilities to deteriorate. Apollo Industries purchased the hotel in 1963 and converted it to the largest Women's Job Corps facility in the United States. The Job Corps dormitory was vacated in 1969, and was destroyed by a spectacular fire on July 3, 1975.

Today, the famous water is bottled and sold as Poland Spring water by Nestlé Waters North America, a subsidiary of Nestlé. 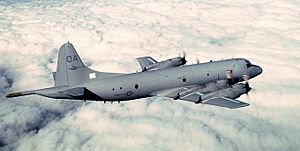 P-3 Orion similar to the one which fell on Tripp Corner.

Poland was the site of one of the last major accidents involving aircraft from Maine's Cold War air bases. A United States Navy patrol bomber from Naval Air Station Brunswick Patrol Squadron 8 (VP-8) disintegrated over Poland on September 22, 1978. An over-pressurized fuel tank caused the port wing of the Lockheed P-3 Orion to separate at the outboard engine. The detached wing sheared off part of the tail; and aerodynamic forces caused the remaining engines and starboard wing to detach from the fuselage. Debris rained down over a wide area near the Tripp Corner intersection on Route 11 shortly after noon. No homes were hit, but an explosive fuel-air fire following impact broke some windows. There were no survivors from the plane's eight-man crew.

The town is crossed by state routes 11, 26 and 122. It is bordered by the towns of Mechanic Falls to the north, Minot to the northeast, Auburn to the east, New Gloucester to the southeast, Casco and Raymond to the southwest, and Otisfield and Oxford to the northwest.

Tripp Pond is on the west side of Maine State Route 11, which provides shoulder parking for public access to the east shore of the pond. There is a ramp for trailered boats at the south end of the pond. Summer water temperatures are too high for trout, but the pond provides good habitat for white perch and largemouth bass. The north end of the pond overflows through a series of shallow ponds to the Little Androscoggin River near Welchville in the town of Oxford, Maine 5 miles (8.0 km) to the north.

This climatic region is typified by large seasonal temperature differences, with warm to hot (and often humid) summers and cold (sometimes severely cold) winters. According to the Köppen climate classification system, Poland has a humid continental climate, Dfb on climate maps.

There were 2,140 households, of which 31.5% had children under the age of 18 living with them, 59.6% were married couples living together, 8.9% had a female householder with no husband present, 5.4% had a male householder with no wife present, and 26.1% were non-families. 18.5% of all households were made up of individuals, and 6.4% had someone living alone who was 65 years of age or older. The average household size was 2.49 and the average family size was 2.81.

The Town of Poland is a member of Regional School Unit 16 (RSU 16). Poland Regional High School (PRHS) serves as the district high school of RSU 16 and is open to all high school–age students of Poland, Mechanic Falls, and Minot, Maine. Students from Raymond, Maine, as well, attend PRHS on a tuition basis. The school's athletic teams compete in Maine class "B" athletics. The school's mascot is the knight and the school colors are blue and silver. Connected to the high school is Bruce M. Whittier Middle School. This school serves all three towns' 7th and 8th grade students (as of 2010). Both schools opened in 1999. Poland Community School, last expanded in 2002, serves Poland's K-6 students.

All content from Kiddle encyclopedia articles (including the article images and facts) can be freely used under Attribution-ShareAlike license, unless stated otherwise. Cite this article:
Poland, Maine Facts for Kids. Kiddle Encyclopedia.