Radford is an inner-city area of Nottingham, located just outside the city centre itself. The appropriate ward of the City of Nottingham Council is called Radford and Park with a population of 21,414. It is bounded on the south by Lenton and Nottingham City Centre, and comprises around 600 acres (2.4 km2) of land. 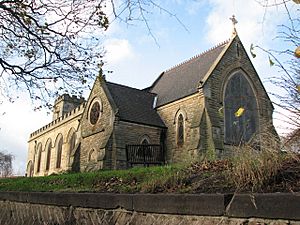 St. Peter's Church, Radford was given by William Peveril to Lenton Priory. The church was rebuilt in 1812 at a cost of £2,000. The Wesleyan chapel, was built in 1805, and enlarged in 1828. In September 1878 a chapel was built on St Peter's Street by the United Methodist Free Churches at a cost of £1,900. It was closed due to declining membership and income in June 1947 and purchased by the Evangelical Free Church. 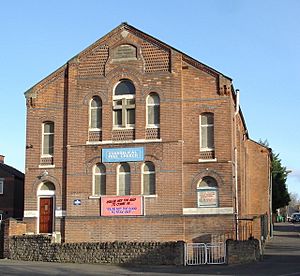 Radford Registration District (RD) was created on 1 July 1837 on the introduction of Statutary registration of Births, Marriages and Deaths (bmd) - and was abolished, and absorbed into Nottingham RD, on 1 July 1880. 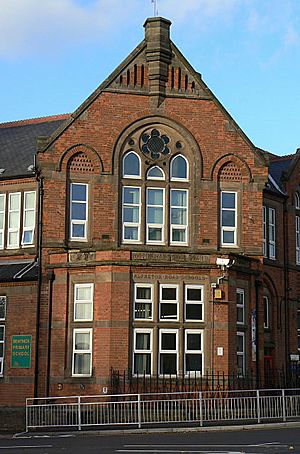 The area has a large ethnic minority population (mainly West Indian, African, Asian and increasingly Polish), and accordingly, there is a large number of specialist food and retail shops catering to specific cultures. Due to the relatively cheap nature of housing in the area (and the large number of old Victorian properties converted into flats and bedsits).

Radford has a large student population, most of whom attend the nearby Nottingham Trent University and University of Nottingham.

It provides the backdrop for much of Alan Sillitoe's book Saturday Night and Sunday Morning. Numerous scenes from the film of the book which starred Albert Finney, were shot in Radford.

All content from Kiddle encyclopedia articles (including the article images and facts) can be freely used under Attribution-ShareAlike license, unless stated otherwise. Cite this article:
Radford, Nottingham Facts for Kids. Kiddle Encyclopedia.