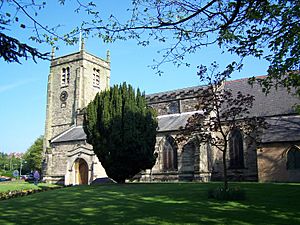 Arnold is a market town and unparished area in the Borough of Gedling in the ceremonial county of Nottinghamshire in the East Midlands of England. It is situated to the north-east of Nottingham's city boundary. Arnold has the largest town centre in the Borough of Gedling and the most important town centre in the northeastern part of the conurbation of Greater Nottingham. Gedling Borough Council is headquartered in Arnold. Since 1968 Arnold has had a market, and the town used to have numerous factories associated with the hosiery industry. Nottinghamshire Police have been headquartered in Arnold since 1979. At the time of the 2011 United Kingdom census, Arnold had a population of 37,768.

Arnold was referred to as ‘Ernehale’ in the Domesday Book of 1068; this former name meant ‘place frequented by eagles’ or ‘the valley of eagles’.

‘A History of Arnold’ (1913) by Rev. Rupert W. King and Rev. James Russell explains the etymology of Arnold’s name thus:

‘Heron-hald’, meaning the corner of the forest where Herons (large birds) live. Which becomes over the centuries since 500 A.D. by ‘lazy’ pronunciation, Eron-ald, thence Ern-old and Arn-old.

Due to the local topography Arnold can never have been a haunt of eagles, because they inhabit areas of rocky outcrops, which have formed cliffs; the nearest such location being Creswell Crags, some 20 miles (32 km) north-west as the eagle flies, although the fish-eating White-tailed Eagle (also known as the ‘Erne’) could have caught fish in the River Trent, which lies 4 miles (6.4 km) south-east of Arnold, on the other side of the Mapperley Plains ridge. These eagles would then have flown north-west in the evenings to roost in the ancient woodland area now known as Arnold. The Anglo-Saxon migrant-invaders, when they arrived along the River Trent from the Humber Estuary c. 500 A.D., would certainly have seen these eagles—which measure 66–94 cm (26–37 in) in length with a 1.78–2.45 m (5.8–8.0 ft) wingspan—flying northwest in the evenings and appropriately named this roosting location ‘Erne-Halh’ or ‘Erne-Haugh’, meaning ‘Eagle’s nook’ or ‘Eagle’s corner’.

Arnold is surrounded by a circular ridge from the north-west around to the south-east and raised ground to the west. The town’s bowl-like topography may have given it the etymological feature ‘-Halh’ or ‘-Haugh’. 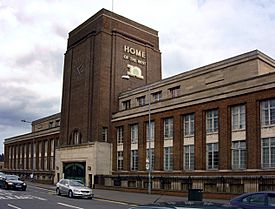 The town’s most notable landmark is probably the Home Brewery Company Ltd. building in Daybrook, usually referred to as ‘Home Ales’ in reference to the Robinson family’s Bestwood Home Farm, located on Oxclose Lane. Founded in 1875 by John Robinson, the brewery was famous for its trademark Robin Hood logo on beermats. The brewery remained independent until 1986, when the family owners sold it (along with 450 public houses owned by the brewery) to Scottish & Newcastle for £123million. Scottish & Newcastle gradually ran down production, by subcontracting it's brewing to Mansfield Brewery, resulting in the eventual closure of the Daybrook building in 1996.

Dating from 1936, the current Home Brewery Company Ltd. building is now officially known as ‘Sir John Robinson House’ and houses more than 30,000 square feet (2,800 m2) worth of county council offices. It is located at the junction between the A60 (Mansfield Road) and Sir John Robinson Way, and its architect was Thomas Cecil Howitt. The Grade II listed building’s illuminated ‘Home of the Best Ales’ sign was altered to remove the word ‘Ales’ and to include the logo of Nottinghamshire County Council. The three-storey building has an unusual ‘putti frieze’ by sculptor Charles L J Doman along the front wall which depicts groups of putti involved in the brewing of beer. Three designs are repeated in an ABCABC / CBACBA pattern. The reliefs are in a 2:3 proportion and are white casts. ‘A’ depicts a drinking table; ‘B’ shows barrel-making; and ‘C’ illustrates the stirring of the brew—all allegories of the brewing process. The famed decorative ironwork gates and railings are contemporaneous and form part of the listed building.

In 1950 the Home Brewery Company Ltd gave the land for Arnold’s King George V Park, a permanent memorial to King George V and guaranteed for free public access in perpetuity for recreation. The Charity Commission held an enquiry that closed in December 2005 into restricted public access. Due to this ruling, Arnold Town F.C. have relocated away from the town centre to another ground in Arnold, known as Eagle Valley. In July 2014, a skatepark costing £110,000 was opened at the playing field.

Arnold was a centre of the framework knitting industry in the 19th century. It was the site of the first framebreaking incidents of the Luddite riots, on 11 March 1811, when 63 frames were smashed. The Luddite riots were a workers’ response to decreasing pay, standard of living and conditions of employment in the industry as a result of changing fashions decreasing demand for their style of hosiery. 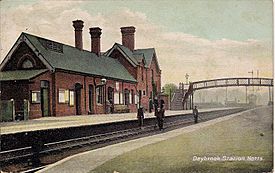 Arnold once had a railway station known as ‘Daybrook and Arnold’ or simply ‘Daybrook railway station’. It was closed along with the rest of the line on 4 April 1960. The station was located on Mansfield Road (A60) on what is now a retail park. There is still evidence of the line in the form of remnants of the embankments on Arnot Hill Park (just behind GO Outdoors). The Line was the Great Northern Main Line later nicknamed ‘the back route’, with trains to Gedling and Netherfield with the terminus being Nottingham Victoria. Just after those embankments a later built railway—the Nottingham Suburban Railway—joined it and ran over Thackerays Lane on a bridge on its way to Woodthorpe Park and beyond.

1968 saw the opening of Arnold Market in the town centre. Market days are on Tuesdays, Fridays and Saturdays, with a flea market being held on Wednesdays. Being a private market, it is not run by Gedling Borough Council.

Arnold Leisure Centre, located on High Street at the heart of the town centre, contains a swimming pool and a theatre—called the Bonington Theatre—which was named after the landscape painter Richard Parkes Bonington. The leisure centre’s most recent refurbishment took place in 2014 at a cost of £1.2 million and include the installation of a canopy outside the main entrance, improvements to the Bonington Theatre and bar area as well as major redesigns of the reception area and the changing rooms of the swimming pool.

Connected to Arnold Leisure Centre is Arnold Library, whose most recent refurbishment cost £300,000 and occurred in 2015, improving the library through: the addition of solar panels; the installation of LED lighting; the replacement of windows, heating and ventilation; new shelving; and enhancements to the children’s library. 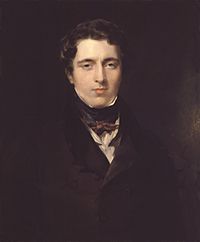 Arnold has a University of the Third Age (U3A) that meets at Arnold Methodist Church.

All content from Kiddle encyclopedia articles (including the article images and facts) can be freely used under Attribution-ShareAlike license, unless stated otherwise. Cite this article:
Arnold, Nottinghamshire Facts for Kids. Kiddle Encyclopedia.