Moss played college football for Marshall University, and twice earned All-America honors. He was drafted by the Minnesota Vikings in the first round of the 1998 NFL Draft, where he played for seven years before a trade in 2005 brought him to the Oakland Raiders. On April 29, 2007, Moss was traded to the New England Patriots for a fourth-round draft pick, where he set the single-season record for touchdown receptions. On October 6, 2010, Moss returned to the Vikings in a trade from the Patriots, but his second stint in Minnesota was short-lived, and was waived by the team less than a month later, being claimed by the Tennessee Titans. After sitting out the 2011 season, Moss signed a one-year contract with the San Francisco 49ers for the 2012 season then opted to retire prior to the 2013 season. He played in two Super Bowl games, XLII with the Patriots and XLVII with the 49ers, both losses.

On February 3, 2018, he was selected to join the Pro Football Hall of Fame in his first year of eligibility. 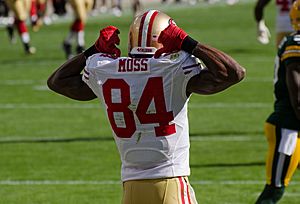 Randy Moss with the 49ers. 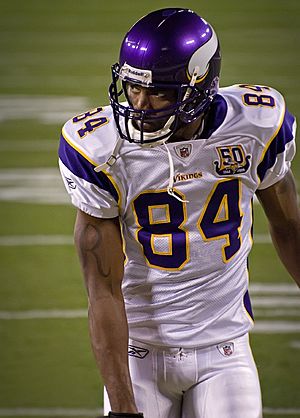 Moss's parents are Maxine Moss and Randy Pratt. He has a sister named Lutisia and a brother Eric, who had a short stint in the NFL as an offensive tackle with the Minnesota Vikings.

Thaddeus played football as a tight end/defensive end for Boone County High School, St. Albans High School (W.Va), and Lincoln (R.I.) High before transferring to Victory Christian Center High School in Charlotte, North Carolina, where Randy was hired as an associate head coach (defensive coordinator) in June 2014. In 2016, Thaddeus played tight end for the NC State Wolfpack. On April 24, 2017 Thaddeus announced that he would be transferring to Louisiana State University.

Sydney is a basketball player at NCAA Division III Thomas More College and set the record for points in the 2014 Division III NCAA Tournament.

Upon his release from the 49ers, Moss was hired as an analyst for Fox Sports 1's Fox Football Daily show.

All content from Kiddle encyclopedia articles (including the article images and facts) can be freely used under Attribution-ShareAlike license, unless stated otherwise. Cite this article:
Randy Moss Facts for Kids. Kiddle Encyclopedia.