Robert Roger Ingpen AM, FRSA (born 13 October 1936) is an Australian graphic designer, illustrator, and writer. For his "lasting contribution" as a children's illustrator he received the biennial, international Hans Christian Andersen Medal in 1986.

Ingpen was born in Geelong, Victoria, and attended Geelong College to 1957. He graduated with a Diploma of Graphic Art from RMIT in 1958, where he studied with Harold Freedman.

In 1958, Ingpen was appointed by the Commonwealth Scientific and Industrial Research Organisation (CSIRO) as an artist to interpret and communicate the results of scientific research. From 1968 Ingpen worked as a freelance designer, illustrator and author. He was also a member of a United Nations team in Mexico and Peru until 1975, where he designed pamphlets on fisheries and was involved in "a number of Australian conservation and environmental projects". He left the CSIRO to work full-time as a freelance writer in 1968. Ingpen's interest in conservation issues continued, and he was one of the founding members of the Australian Conservation Foundation. 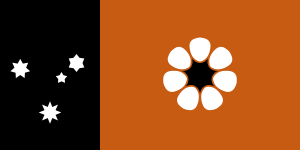 Flag of the Northern Territory as designed by Ingpen.

Ingpen has written or illustrated more than 100 published books. These include children's picture books and fictional stories for all ages. His nonfiction books mostly relate to history, conservation, environment and health issues. His most frequent collaborator has been the author and editor Michael Page.

Ingpen has designed many postage stamps for Australia, as well as the flag and coat of arms for the Northern Territory. Ingpen has created a number of public murals in Geelong, Melbourne, Canberra and the Gold Coast in Queensland. He also has designed bronze statues, which include the Poppykettle Fountain in the Geelong Steam Packet Gardens (currently dry due to drought restrictions) and the bronze doors to the Melbourne Cricket Club. His most recent work is the design and working drawings for a tapestry, which was woven by The Victorian Tapestry Workshop, to celebrate the 150 years of the Melbourne Cricket Ground.

In 1982 Ingpen designed the Dromkeen Medal for the Governors of the Courtney Oldmeadow Children's Literature Foundation. The Dromkeen is awarded annually to Australians in recognition of contributions to children's literature and Ingpen received it himself in 1989 for his own work in the field.

Ingpen was illustrator for the centenary editions of J.M. Barrie's Peter Pan and Wendy and Kenneth Grahame's The Wind in the Willows for which he bases characterisations on contemporary figures and personalities.

In 2007 Ingpen illustrated a picture book by Liz Lofthouse called Ziba Came on a Boat, which was nominated for many Australian awards including the Australian Children's Book Council Awards and the Western Australian Premier's Book Awards.

In 1999 Ingpen had a major retrospective exhibition in Taipei, which travelled to other regions of Taiwan for a two-month period. Also in 1999 an exhibition of the original artworks and book launch for Around the World in 80 Days was held in London.

In 2002 Ingpen had a solo exhibition in Bologna, Italy, and works from Shakespeare were exhibited in New York City.

In 2002 Ingpen's work featured in the inaugural exhibition at the Eric Carle Museum of Picture Book Art, Massachusetts, and he donated to the Museum the illustrations for Charise Neugebauer's Halloween Circus at the Graveyard Lawn (2003).

The biennial Hans Christian Andersen Award conferred by the International Board on Books for Young People is the highest recognition available to a writer or illustrator of children's books. Ingpen won the illustration award in 1986. Patricia Wrightson won the writing award that year, and they remain the only Australians among more than 60 Andersen Medal recipients. Ingpen had illustrated Wrightson's most highly regarded work, The Nargun and the Stars (1973), a children's fantasy rooted in Australian Aboriginal mythology.

He received the Australian Dromkeen Medal in 1989. In 2005 he was made honorary doctor of arts by the Royal Melbourne Institute of Technology and in 2007 made a member of the Order of Australia for "service to literature as an illustrator and author of children's books, to art design and education, and as a supporter of health care organisations."

Template:‡ 12 works named by Palazzo Editions in two pages on Ingpen. The Night Before Christmas and The Owl and the Pussycat differ in format, larger and much shorter than the "Palazzo Children's Classics" series (192 to 240pp, 235 x 195mm).

All content from Kiddle encyclopedia articles (including the article images and facts) can be freely used under Attribution-ShareAlike license, unless stated otherwise. Cite this article:
Robert Ingpen Facts for Kids. Kiddle Encyclopedia.