Rose Bay is a suburb of the City of Clarence in greater Hobart, capital city of Tasmania, Australia. Rose Bay is a small suburb, making up only approximately 0.9 square kilometres with nearly one fourth of that area (23.2%) being parkland. At the 2016 Census the suburb recorded a population of 1,102 people. 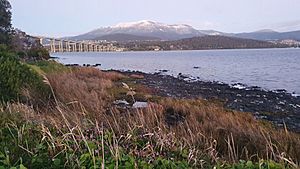 Winter views of a snow covered kunanyi / Mount Wellington, taken at the end of Yolla Street and the start of the Esplanade along the Rose Bay foreshore walk.

Of people aged 15 or older in Rose Bay, the most common education level achieved is a bachelor's degree or higher, 30.3%. This is almost double Tasmania's average of 16.2% and well above the overall national average of 22%.

At the 2016 Census, the most commonly nominated ancestries were:

Aboriginal and/or Torres Strait Islander people made up 0.8% of the Rose Bay population.

The most common responses for religion in Rose Bay were "No Religion" (38.4%). One in five, (20.8%) of the residents are Anglican and 18.5% identify as Catholic. Christianity is the largest religious group overall in Rose Bay (57.3%).

Rose Bay suburb is home of Rose Bay High School, founded in 1961. The school is located above the Tasman Bridge with views of River Derwent, kunanyi / Mount Wellington., the city of Hobart and the Tasman Bridge, which can be viewed live via the school's webcam. In 2020, the school enrolled 678 students.

Rose Bay is easily accessible using a variety of transportation methods. It is a short 6-7-minute drive from Hobart City centre. A majority of Rose Bay residents use their car to travel to work (70%) either as a driver or passenger.

An Uber / Ola ride is approx. $9–10 one way from Hobart City centre to Rose Bay.

Metro Tasmania services Rose Bay with multiple stops. Rose Bay is the last stop on the Eastern Shore before the bus heads across the Tasman Bridge with its following stop being the Royal Hobart Hospital before it arrives at the Hobart bus mall. Likewise, Rose Bay is the first stop once the bus leaves the city centre making the suburb a convenient location for public transport with the commute usually averaging about 10 minutes. Bus stops are located along the Tasman Highway near Rose Bay High School or along the East Derwent Highway depending on bus route.

Rose Bay Foreshore also connects to the Tasman Bridge and the pedestrian and bike path crossing the bridge. It takes about 20 minutes to bike between Rose Bay and Hobart City Centre. 3.9% of Rose Bay residents exclusively walk to work.

In October 2020, the Tasmanian State Government announced that the Tasman Bridge is set to undergo its first major upgrade since it was repaired following the Lake Illawara disaster in 1975. Commencing in 2021, the project will be implemented in stages with an anticipated end date of 2023–24. Residents of Rose Bay and the wider Eastern Shore community will as a result, see a significant widening of the bike and pedestrian path across the bridge to 3.5 metres on either side of the road, improved barriers and feature lighting of the arches at night. The Bicycle Network labelled the upgrades as a "game changer" and said:

"Wider paths protected from wind and separated from traffic would encourage many more people to ride or walk to the city. Improved paths on the bridge will also be a tourism benefit as visitors would seek the view out over Hobart from the peak of the bridge and ride the Foreshore Trail on the eastern shore."

ABC Hobart published images of the artist's impression, released by the State Government on their Facebook page, images are also available via a google search on the topic "Tasman bridge upgrade".

Hobart International Airport is a 12-minute drive (15 km) trip from Rose Bay. Thanks to the suburb's location, travellers can easily access the Tasman Highway via the East Derwent Highway.

All content from Kiddle encyclopedia articles (including the article images and facts) can be freely used under Attribution-ShareAlike license, unless stated otherwise. Cite this article:
Rose Bay, Tasmania Facts for Kids. Kiddle Encyclopedia.