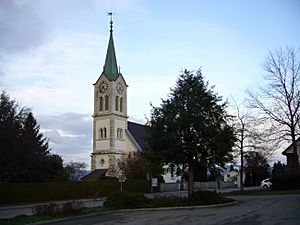 Rothrist is a municipality in the district of Zofingen in the canton of Aargau in Switzerland.

Originally an Alamanni settlement, the modern village of Rothrist is first mentioned in 1263 as Routris. The Herrschaft rights were held by the Counts of Frohburg until 1299, when they transferred to the Habsburgs. Following the conquest of the Aargau in 1415, it became part of Bern. Under both the Habsburgs and Bern, it was part of the court of Aarburg. From 1798 until 1802 it was part of the Canton of Bern, and in 1803, it came to the newly created Canton of Aargau as part of the Zofingen district. In 1706 the municipality built its first schoolhouse on the Hölzli. In 1917 a district school opened. The municipal museum (Heimatmuseum) was built in 1970.

Throughout the Middle Ages it was part of the church parish of Zofingen kirchgenössig. Between 1667-1714 it was under the ecclesiastical court of Oftringen. In 1714 the Reformed parish of Rothrist was established with its own church. The village's Catholic church was built in 1971.

In the 18th Century agriculture and the home weaving industry dominated in Rothrist. Along the rivers in the lower Pfaffner and Wigger valleys, small businesses opened in the 19th Century. Because of the economic crisis on 1855, 300 residents of the village were forced to emigrate to America. Five years after connecting to the Olten-Bern railway line in 1857, the first large factory was built on the west boundary of the municipality. This factory, a spinning mill, used the water power of the Rotkanal. A strong push toward industrialization began after 1930. Then, in 1952 the soft drink company Rivella was founded. Due to the motorway junction, a number of companies and factories settled along the access roads in the municipality. The number of jobs in the municipality rose from 1,429 in 1950 to 3,952 in 2005. 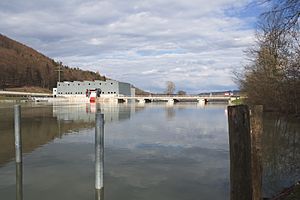 Of the built up area, industrial buildings made up 5.2% of the total area while housing and buildings made up 14.9% and transportation infrastructure made up 7.8%. Power and water infrastructure as well as other special developed areas made up 1.9% of the area Out of the forested land, 30.9% of the total land area is heavily forested and 1.9% is covered with orchards or small clusters of trees. Of the agricultural land, 21.7% is used for growing crops and 11.0% is pastures, while 1.1% is used for orchards or vine crops. All the water in the municipality is flowing water.

The municipality is located in the Zofingen district, along a bend in the Aare river. It is located west of the confluence of the Pfaffnern and Wigger rivers. It consists of the village of Rothrist and a number of scattered the hamlets.

All content from Kiddle encyclopedia articles (including the article images and facts) can be freely used under Attribution-ShareAlike license, unless stated otherwise. Cite this article:
Rothrist Facts for Kids. Kiddle Encyclopedia.