Royalton is a town in Windsor County, Vermont, United States. The population was 2,773 at the 2010 census. It includes the villages of Royalton, South Royalton, and North Royalton. Vermont Law School, the state's only accredited law school, is located in South Royalton. 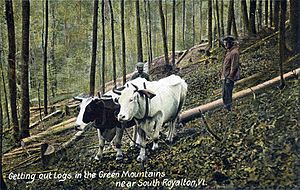 The town was chartered on November 23, 1769 Royalton was re-chartered by the Independent Republic of Vermont on December 20, 1781. The 1780 Royalton Raid was the last major British raid of the American War of Independence in New England. In 1848, the Vermont Central Railroad opened to South Royalton, which developed as a freight depot.

Although Joseph Smith, founder of Mormonism, was born in the adjacent town of Sharon near the Royalton boundary, the Joseph Smith Birthplace Memorial lies in the town.

In June 1974, the now-defunct Royalton College hosted the Institute for Humane Studies' Conference on Austrian Economics. The conference is considered the "single most important catalyst in this revival of Austrian economics", an economic theory also known as "The Austrian School", the "Vienna School" or the "Psychological School". Edwin G. Dolan hosted the conference. Notable presenters included Israel M. Kirzner, Ludwig M. Lachmann, and Murray N. Rothbard. The edited version of the conference proceedings appears in Professor Dolan's The Foundations of Modern Austrian Economics.

In the mid-20th-century Royalton had an economy largely built around lumbering, dairy production, poultry raising, the raising of fresh produce vegetables and maple sugar production.

There were 1,155 households, out of which 26.5% had children under the age of 18 living with them, 43.8% were couples living together and joined in either marriage or civil union, 6.8% had a female householder with no husband present, and 46.1% were non-families. 34.5% of all households were made up of individuals, and 7.3% had someone living alone who was 65 years of age or older. The average household size was 2.24 and the average family size was 2.95. 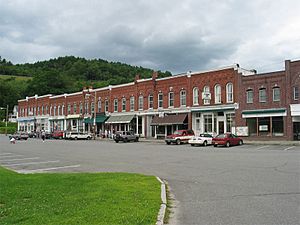 All content from Kiddle encyclopedia articles (including the article images and facts) can be freely used under Attribution-ShareAlike license, unless stated otherwise. Cite this article:
Royalton, Vermont Facts for Kids. Kiddle Encyclopedia.