Tunbridge is a town in Orange County, Vermont, United States. As of the 2000 census, the town population was 1,309. The town consists of three village centers, all situated on Vermont Route 110 in the valley of the first branch of the White River. The three settlements are named North Tunbridge (also known locally as "Blood Village"), Tunbridge Village ("Market") and South Tunbridge ("Jigger").

The town of Tunbridge was created on September 3, 1761, by way of a royal charter which King George III of England issued to Governor Benning Wentworth of New Hampshire.

The name Tunbridge was chosen by Wentworth and most likely in honor of (or to gain favor with), the English noble William Henry Nassau de Zuylestein (1717-1781), fourth Earl of Rochford, Viscount Tunbridge, Baron Enfield and Colchester. De Zuylstein's secondary title is derived from the old "royal borough" of Tunbridge Wells (officially Royal Tunbridge Wells) in England.

Just before dawn on October 16, 1780, the town line of Tunbridge and Royalton was witness to the last major raid of the Revolutionary War in New England. In the "Royalton Raid" three hundred Indians led by British soldiers invaded from Canada along the First Branch of the White River. Part of a series of raids designed to terrorize frontier settlements, the result was the destruction of dozens of homes, crops and livestock necessary to survive the coming winter. Although women and girls were not harmed, 28 men and boys were taken captive and marched to Canada to be imprisoned. In the years that followed, many of the captives made their way back to their families, but some never returned. One resident, Peter Button, was killed in Tunbridge near the Royalton town line along what is Rte. 110 today; an historic marker has been erected there.

The first Tunbridge proprietors' meeting of which there is any record was held at the house of John Hutchinson on May 28, 1783. The minutes of this meeting show that others were previously held, but no records of them have been found. Elias Curtis was the first proprietors' clerk.

The entire center of Tunbridge Village, including the fairgrounds, was placed on the National Register of Historic Places in 1994. Officially the district listing is "Roughly, along VT 110 and adjacent rds. including Town Rd. 45 and Spring and Strafford Rds."

Tunbridge has five covered bridges (all listed on the National Register)

Tunbridge also has two other structures are individually listed on the National Register:

The historical antecedent of the Tunbridge World's Fair can be traced to the town's charter, which therein authorized the establishment of two annual fairs when the population of the town reached fifty families.

It wasn't until 1867 that, after a succession of fairs in Orange County starting in 1847, the Tunbridge Agricultural Society was organized and staged a fair at the Elisha Lougee Farm in North Tunbridge. At the 1867 fair, Vermont's former Lieutenant Governor Burnham Martin referred to the fair as a "little World's Fair". Lewis Dickerman adopted the phrase and used it in the 1868 publicity handbills and the Tunbridge fair has since used the name.

In 1875, the Union Agricultural Society assumed the sponsorship of the fair and moved its location to the present fairgrounds in the center of Tunbridge.

In 1894, the fair joined the National Trotting Association, and for many years has maintained the only remaining grass race track in Vermont. 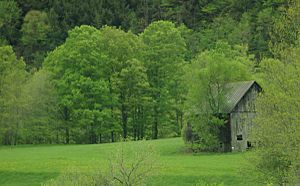 According to the United States Census Bureau, the town has a total area of 44.8 square miles (115.9 km2), of which 44.7 square miles (115.9 km2) is land and 0.04 square mile (0.1 km2) (0.04%) is water. The First Branch of the White River running north to south divides Tunbridge into two nearly equal parts. Two mineral springs exist in the town, one of which is a white sulphur spring located on "Spring road," one and a half miles from Tunbridge Center; this spring was once valued for its medicinal properties.

The highest points of land are Brocklebank Hill at 2100+ ft near the northern boundary with Chelsea, Old Hurricane Hill at 1900+ ft in the northwestern part near East Randolph, and East Hill at 2112 ft near the Strafford line. The soil is well-drained and was formed in Wisconsin-age glacial till, its average depth is around 20 to 40 inches. Typical composition of the soil is; a surface layer of very dark brown, partially decomposed organic material, a subsurface layer of gray fine sandy loam, upper subsoil of dark brown fine sandy loam and subsoil of brown channery fine sandy loam. The rocks underlying Tunbridge are entirely of the calciferous mica schist formation, with a small bed of granite, syenite and protogine in the northeastern part.

No. 9 of the Acts of 1985, effective March 27, 1985, designated the Tunbridge Soil Series as the official State Soil. The Tunbridge series (course-loamy, mixed, frigid Typic Haplothrod) consists of moderately deep to bedrock, well drained soils. It was selected from among more than 160 different soil series in the state. As it is a typical "hill farm" and "sugarbush" soil, the Tunbridge series well represents the soil resources of Vermont. A soil formed in loamy glacial till, it has good potential for agriculture and forestry. As Professor Richmond Bartlett of UVM says, "It's the soil that makes Vermont hills greener than those either in New Hampshire or New York."
---From Office of the Secretary of State, Vermont Legislative Directory and State Manual, Biennial Session, 1993–1994, p. 16.

There were 513 households out of which 31.0% had children under the age of 18 living with them, 55.0% were couples living together and joined in either marriage or civil union, 11.3% had a female householder with no husband present, and 29.4% were non-families. 21.1% of all households were made up of individuals and 8.4% had someone living alone who was 65 years of age or older. The average household size was 2.55 and the average family size was 2.94.

All content from Kiddle encyclopedia articles (including the article images and facts) can be freely used under Attribution-ShareAlike license, unless stated otherwise. Cite this article:
Tunbridge, Vermont Facts for Kids. Kiddle Encyclopedia.