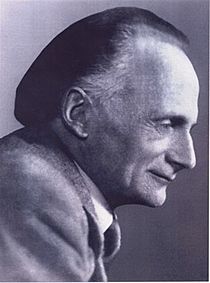 Rutland Boughton (born Aylesbury, Buckinghamshire 23 January 1878; died London, 25 January, 1960) was an English composer. He was well known in the early 20th century as a composer of opera and choral music.

Boughton studied with Charles Villiers Stanford and Walford Davies. He wrote many different kinds of music including symphonies, concertos, part-songs, songs, chamber music and opera. His best known work was the opera The Immortal Hour. His carol Bethlehem (1915) became very popular in England and in many other countries.

He was a great admirer of the composer Richard Wagner who had built his own theatre, the Bayreuth Festspielhaus, in the German town of Bayreuth. Boughton wanted to create an "English Bayreuth" at Glastonbury, so he started the series of Glastonbury Festivals that took place from 1914 until 1926. From 1927 until his death in 1960, he lived at Kilcot near Newent, Gloucestershire.

All content from Kiddle encyclopedia articles (including the article images and facts) can be freely used under Attribution-ShareAlike license, unless stated otherwise. Cite this article:
Rutland Boughton Facts for Kids. Kiddle Encyclopedia.