Sea Mills is a suburb of the English port city of Bristol. It is situated 3.5 miles (6 km) north-west of the city centre, towards the seaward end of the Avon Gorge, lying between the former villages of Shirehampton to the west and Westbury-on-Trym & Stoke Bishop to the east, at the mouth of the River Trym where it joins the River Avon. Sea Mills forms part of the city ward of Kingsweston. Despite Roman remains, its place in the history of the area before the 20th Century is small.

Sea Mills was the site of a Roman settlement, known as Portus Abonae. The name and location suggest that this was a river or sea port. The Roman settlement seems to have been abandoned by the 4th century, and there is no evidence of Saxon settlement. 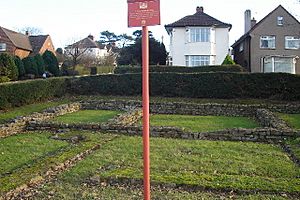 By the Middle Ages Bristol had become a major port, with all traffic between the port and the sea having to pass through the Avon Gorge and past Sea Mills. In 1712, Joshua Franklyn, a Bristol merchant, built a wet dock at Sea Mills, to eliminate the need for large sailing ships to navigate the dangerous River Avon any further upstream. This was located where the River Trym enters the River Avon. However, poor transport links doomed the enterprise and the harbour facilities fell into disrepair by the end of the 18th century. Some remains of the dock still exist, and are used as a harbour by pleasure craft.

In the 1920s and 1930s, Sea Mills was developed as a planned green suburb. Much of the housing was local authority, although it is now mainly in private ownership. Adjacent to the Portway is a small estate of prefabricated bungalows dating from a post-WW2 housing scheme.

Sea Mills also has its own football team Sea Mills Park FC, formed in 1925 and has now been running for over 90 years, the 1st team currently play in the Bristol Premier Combination. They historically played their games at the Rec, opposite Sea Mills Square, but play all home games at Kingsweston Sports & Social, Napier Miles. They were recent Bristol & District Senior League Champions 2012/13 beating Chipping Sodbury Town Res. 6-1 on the final day of their league campaign to clinch the title.

October 2006 saw the opening of The Portway Rugby Development Centre. The facilities there are 2 outdoor 3G Crumb pitches, suitable for Rugby and Football, outdoor grass Rugby pitches (ready for August 2007) and grass training grids. There are 2 meeting rooms situated and they host many meetings and aerobics classes. A number of local football clubs use this facility including Wanderers FC. Many of Bristol's rugby clubs use the facilities also, from St Brendans RFC to Clifton RFC. 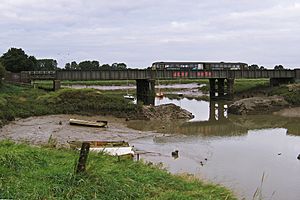 The remains of the dock wall and the Severn Beach railway line crossing the Trym at Sea Mills.

In 1865, the Bristol Port and Pier Railway opened from Hotwells to a deep water pier on the Severn Estuary at Avonmouth. Sea Mills railway station was one of the original stations on the line. The station still exists, although the line is now part of the National Rail network, and the line has been extended to run from Bristol Temple Meads to Severn Beach.

The wide A4 Portway trunk road passes along the south-west edge of Sea Mills and links central Bristol with its port at Avonmouth. Running parallel to the serpentine path of the River Avon, the Portway was the most expensive road in Britain when it was opened in 1926. Both the Portway and the railway line have bridges over the harbour outfall into the Avon.

Ocean-going ships used to sail past Sea Mills, going to and from Bristol Docks. Nowadays most of the shipping is in the form of pleasure craft, Bristol's main docks now being at Avonmouth and Portbury.

All content from Kiddle encyclopedia articles (including the article images and facts) can be freely used under Attribution-ShareAlike license, unless stated otherwise. Cite this article:
Sea Mills, Bristol Facts for Kids. Kiddle Encyclopedia.