Setauket-East Setauket /səˈtɔːkɪt/, more commonly known as the Setaukets (or that region's core), is a census-designated place (CDP) in Suffolk County, New York, on the North Shore of Long Island. As of the 2010 United States Census, the CDP population was 15,477. The CDP encompasses the hamlets of Setauket (formerly West Setauket) and East Setauket. It was founded in 1655, the first settlement in what would become the Town of Brookhaven.

Setauket was founded as an agricultural community in the mid-17th century, and was a regional center of activity during the American Revolutionary War noted for the Culper spy ring and the Battle of Setauket. Many of Setauket's early structures are intact and now form the Old Setauket Historic District. The Setaukets remain a mostly residential area, while bordering the more commercial enclaves of Port Jefferson and Stony Brook. The handful of businesses within the community largely cater to the over 24,500 students of Stony Brook University, which is adjacent to the CDP.

The name Setauket is derived from the historic Algonquian-speaking Setalcott Indians, who had lived in the area prior to its colonial period. 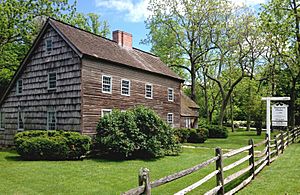 The c. 1709 Thompson House housed five generations of farmers and doctors before it was bought and restored by philanthropist Ward Melville

In 1655, a handful of land-speculating colonists orchestrated the purchase of the Setauket area from the local natives. The region's first European settlers were English migrants from New England and further east on Long Island, who arrived shortly thereafter. This was the first settlement in what later became the Town of Brookhaven, and both the hamlet and town use the 1655 date as their origin. During the 17th century, Setauket was synonymous with the colonial town of Brookhaven.

During the 1660s the settlement was temporarily renamed to Ashford. This change was facilitated by Captain John Scott, an early settler of Setauket and an important leader in Long Island's early history who briefly served under the title of President of Long Island. A crafty land speculator, Scott claimed at one point to own a third of the island including the Setauket area. Despite the questionable nature of many of his claims, John Scott had enough power and support to rename Setauket for his ancestral homeland in England, Ashford, Kent, and to construct a stately home named Egerton.

John Woolman, a well known preacher and journalist, noted having attended a Quaker meeting at "Setawket" in the spring of 1747. 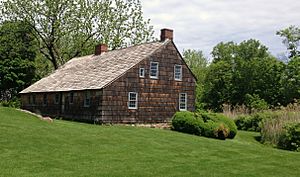 The c. 1665 Brewster House is the oldest existing structure in the Town of Brookhaven. During the Revolutionary War, it housed a tavern where British occupiers were entertained 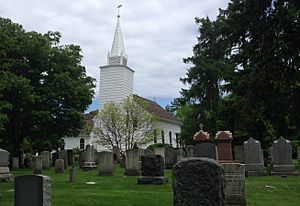 The Caroline Church of Brookhaven, built 1729, is the oldest extant church in Suffolk County

In the American Revolutionary War, the 1777 Battle of Setauket was fought on the village green. At the time, Loyalists controlled Setauket and had fortified the Presbyterian church for use as their stronghold. A Patriot force led by General Samuel Holden Parsons sailed across the Long Island Sound from Fairfield, Connecticut, purposing to attack the Loyalists. Three hours of gunfire ensued before Parsons withdrew and returned to Connecticut with minimal casualties for either side. During the gunfight, Parsons' men took cover behind Patriots' Rock, which remains near the village green with a commemorative plaque. Some of the bullets were embedded into the walls of the extant Caroline Church of Brookhaven.

From 1778 to 1781, the Culper Spy Ring passed information about British troop movements gathered in New York City to George Washington. The spy ring consisted primarily of Setauket residents, including its leader Benjamin Tallmadge and key agent Abraham Woodhull. The Culper ring was highly successful and alerted Washington to such plots as a surprise attack on the newly allied French forces, a scheme to counterfeit Continental currency, and the secret defection of a general in the Continental Army (afterwards known to be Benedict Arnold). Washington later spent a night in Setauket during his 1790 tour of Long Island.

During the British occupation, residents held religious services at the c.1729 Caroline Church (Episcopal) while British forces occupied the Setauket Presbyterian Church. The pulpit of the Presbyterian church was destroyed and a number of gravestones from the surrounding cemetery were moved as part of the fortifications. Services resumed after the war until lightning hit the church in 1812. The Presbyterian church was rebuilt in 1812. The village green continues to be owned by both churches. 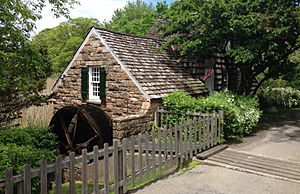 Setauket Mill, a 1937 replica based on earlier structures

The 19th century brought industry to East Setauket. Shipbuilding, which had begun as early as 1662, prospered as new shipyards populated the section of Setauket Harbor known as Dyers Neck. These supplemented larger operations in neighboring Port Jefferson. Among the vessels built at Setauket were the Adorna in 1870 by David Brewster Bayles, which was the largest square-rigged sailing ship built on Long Island outside of Brooklyn (At that time Brooklyn was considered part of Long Island, and the largest sailing vessel built at Port Jefferson, the Martha E. Wallace of 1902, was a schooner). A likeness of the Adorna has pride of place today above the main entrance of Setauket's high school. Better known is the famous, or infamous, schooner yacht Wanderer built at Setauket in 1857 by William J. Rowland at the direction of captain Thomas B. Hawkins who would later command her. The Wanderer was sold to new owners after her first cruise and they tried to have the vessel secretly converted into a slaver at Port Jefferson in 1858 largely employing outsiders but suspicious residents alerted authorities and the vessel was captured by the USS Harriet Lane off Port Jefferson as it attempted a hasty departure. Sadly, authorities in New York returned the vessel to its owners, and she later completed what is considered the last successful American slaving voyage to Africa. She did so without Captain Hawkins who quit before the vessel was released. What is less well known is that the Wanderer later served in the Union navy during the Civil War as the USS Wanderer and captured two small blockade runners. From 1876 until 1904, East Setauket also ran a rubber factory for the Long Island Rubber Company. By the early 20th century, nearly all industrial activity within the Setaukets had ceased.

Following the 1873 completion of railroad service from New York City to Port Jefferson, the Setaukets began functioning as a summer resort town. Into the mid-20th century, relatively wealthy families started settling in the non-industrialized sections of the Setauket waterfront.

In the post-war era, Setauket experienced a population boom, as the remaining agricultural lots were filled in with residential developments. The Old Setauket Historic District was established to counteract this change and a sizeable proportion of Setauket's housing stock continues to be pre-war. Extant historical homes include the 1709 Thompson House and the 1830 Sherwood-Jayne Museum. The Frank Melville Memorial Park was established in 1937 and preserves much of the land around the Setauket Mill Pond. 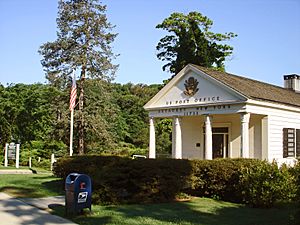 The Setaukets were also influenced by the philanthropy of Ward Melville, owner of what would become CVS Corporation, throughout the Three Village area. Melville founded Stony Brook University, the campus of which abuts the Setaukets on their western side. A minority of the University's students and faculty now live in the Setaukets. Ward Melville also created a New England-style village district in neighbouring Stony Brook, being the closest commercial hub to Setauket's western areas and complimenting the role of Port Jefferson to the east. East Setauket is home to Renaissance Technologies, one of America's most profitable hedge funds, which was founded by Stony Brook University mathematics professor James Harris Simons.

In 2012, local politicians formed a planning committee for the section of New York State Route 25a bordering Stony Brook University, shared between Setauket and Stony Brook. Much of this corridor is currently underutilized, with a handful of businesses in small strip malls. The concept is to create a more walkable downtown area that may attract business from students and long-term residents alike.

In May 2014, a 3.5 mile bicycle path known as the Greenway Trail opened connecting Setauket and Port Jefferson Station. Plans are being made to further expand the bicycle route to Wading River by converting defunct railroad tracks.

The Greek Orthodox Monastery of the Holy Cross, headquarters of the Jerusalem Patriarchate in America, is also located in Setauket. 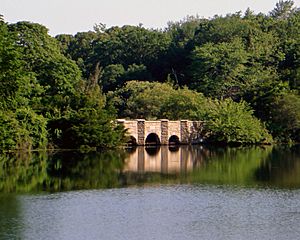 Setauket has a New England–style village green with a mill pond and park, a quaint post office, the Caroline Church built in 1729, and the Setauket Presbyterian Church established in 1660. The Emma S. Clark Library, also on the Village Green, is often considered one of the best on Long Island. This section is the historical center of the original settlement and forms the core of the Old Setauket Historic District. The mill pond is additionally within the public Frank Melville Memorial Park.

Almost all of the commercial establishments in Setauket are concentrated in three areas: on Route 25A (here also known as North Country Road), Belle Meade Road (formerly called Terminal Road after the oil terminal), and on New York State Route 347/Nesconset Highway. Numerous medical and professional offices are located on Belle Meade Road, along with other businesses that service them. A few additional shops and factories were established before modern zoning rules went into effect, a handful of which are located on Gnarled Hollow Road and Comsewogue Road. The remainder of Setauket is predominantly residential.

The three major east-west roads are New York State Route 25A (also known as Northern Boulevard), N.Y.S. Route 347 and Sheep Pasture Road. The colonial-era Sheep Pasture Road is split among Upper and Lower Sheep Pasture Roads for a short stretch between Gnarled Hollow Road and Pond Path. Setauket is accessible from the Long Island Expressway via Exit 62 and Nicolls Road.

"The Setaukets" refers to an area between Stony Brook and Port Jefferson harbors, sometimes including parts of Stony Brook University. As such, they comprise all of Setauket-East Setauket and often Old Field, Strong's Neck, and Poquott. South Setauket lies south of Route 347 and shares a zipcode with Centereach. All of these towns plus Stony Brook combine to form the "Three Village" area, a region served by the Three Village Central School District. 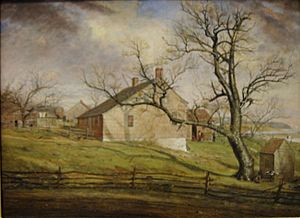 There were 5,589 households out of which 39.2% had children under the age of 18 living with them, 68.6% were married couples living together, 6.8% had a female householder with no husband present, and 22.3% were non-families. 17.2% of all households were made up of individuals and 4.7% had someone living alone who was 65 years of age or older. The average household size was 2.88 and the average family size was 3.26.

All content from Kiddle encyclopedia articles (including the article images and facts) can be freely used under Attribution-ShareAlike license, unless stated otherwise. Cite this article:
Setauket-East Setauket, New York Facts for Kids. Kiddle Encyclopedia.