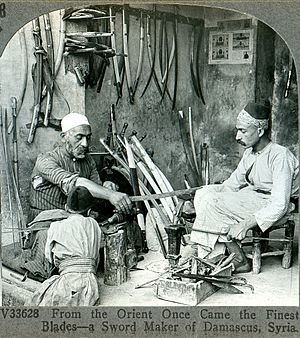 A metalsmith or simply smith is a craftsman fashioning useful items (for example, tools, kitchenware, tableware, jewellery, and weapons) out of various metals. Smithing is one of the oldest metalworking occupations. Shaping metal with a hammer (forging) is the archetypical component of smithing. Often the hammering is done while the metal is hot, having been heated in a forge. Smithing can also involve the other aspects of metalworking, such as refining metals from their ores (traditionally done by smelting), casting it into shapes (founding), and filing to shape and size.

The prevalence of metalworking in the culture of recent centuries has led Smith and its equivalents in various languages to be a common occupational surname (German Schmidt, Portuguese Ferreiro, Ferreira, French Lefèvre, Spanish Herrero, Italian Fabbri, Ferrari, Ferrero, Ukrainian Koval etc.). As a suffix, -smith connotes a meaning of a specialized craftsman—for example, wordsmith and tunesmith are nouns synonymous with writer or songwriter, respectively.

In pre-industrialized times, smiths held high or special social standing since they supplied the metal tools needed for farming (especially the plough) and warfare.

A metalsmith is one who works with or has the knowledge and the capacity of working with "all" metals. 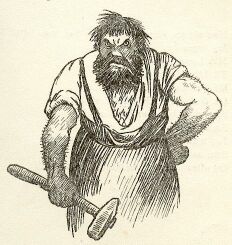 Types of smiths include: 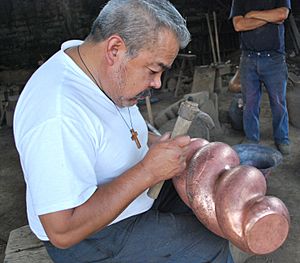 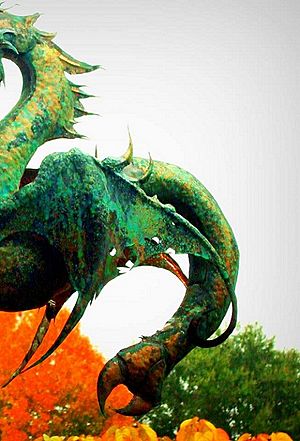 "Aeolus's Weathervane." Detail of a weather vane created by using a variety of metalsmithing techniques

The ancient traditional tool of the smith is a forge or smithy, which is a furnace designed to allow compressed air (through a bellows) to superheat the inside, allowing for efficient melting, soldering and annealing of metals. Today, this tool is still widely used by blacksmiths as it was traditionally.

The term, metalsmith, often refers to artisans and craftpersons who practice their craft in many different metals, including gold, copper and silver. Jewelers often refer to their craft as metalsmithing, and many universities offer degree programs in metalsmithing, jewelry, enameling and blacksmithing under the auspices of their fine arts programs.

Machinists are metalsmiths who produce high-precision parts and tools. The most advanced of these tools, CNC machines, are computer controlled and largely automated.

All content from Kiddle encyclopedia articles (including the article images and facts) can be freely used under Attribution-ShareAlike license, unless stated otherwise. Cite this article:
Metalsmith Facts for Kids. Kiddle Encyclopedia.