Solon is a town in Somerset County, Maine, United States. The population was 978 at the 2020 census. 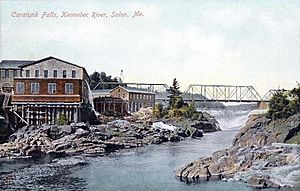 The first known inhabitants were the Abenaki Indians, whom European settlers encountered in the early 1600s. There are petroglyphs that have been said to be 5,000 years old or more, but more than likely came about after 1620. General Benedict Arnold and his troops camped below Caratunk Falls on October 7, 1775 before carrying their boats around them on the way up the Kennebec River to the Battle of Quebec. Originally called T1 R2 EKR, the plantation would known as Spauldingtown after Thomas Spaulding, a grantee. It was settled in 1782 by William Hilton from Wiscasset, who purchased 500 acres (2.0 km2). On February 23, 1809 it was incorporated as Solon, named after Solon, a statesman and poet of Ancient Greece.

Agriculture was the principal occupation of the inhabitants. The surface of the town is uneven, the underlying rock slate, but the sandy and occasionally gravelly loam produced good crops of hay and grain. Solon village was established at Fall Brook, its water power used to operate mills. By 1859, when the population was 1,419, there were two sawmills, a gristmill, a shovel handle factory, two fulling and two carding machines, and two blacksmiths. By 1886, the town's industries included a carriage manufacturer and a harness maker.

Solon is the gateway to the Old Canada Road (U. S. Route 201), which from 1820 until 1860 served as the primary link between Lower Canada and Maine. The scenic byway follows the Kennebec River valley through antique villages into forests near the Canada–US border.

The town is crossed by U.S. Route 201, 201A and Maine State Route 8. It borders the towns of Bingham and Brighton Plantation to the north, Athens to the east, Cornville and Madison to the south, and Embden to the west.

There were 459 households, of which 26.4% had children under the age of 18 living with them, 52.5% were married couples living together, 5.9% had a female householder with no husband present, 5.2% had a male householder with no wife present, and 36.4% were non-families. 27.0% of all households were made up of individuals, and 8.3% had someone living alone who was 65 years of age or older. The average household size was 2.29 and the average family size was 2.75.

Stereoscopic photographs of Solon from the Victorian era:

All content from Kiddle encyclopedia articles (including the article images and facts) can be freely used under Attribution-ShareAlike license, unless stated otherwise. Cite this article:
Solon, Maine Facts for Kids. Kiddle Encyclopedia.