South of Market (or SoMa) is a relatively large neighborhood in San Francisco, California, United States which is located just south of Market Street, and contains several sub-neighborhoods including: South Beach, Mission Bay, and Rincon Hill.

SoMa is home to many of the city's museums, to the headquarters of several major software and Internet companies, and to the Moscone Conference Center.

The area's boundaries are Market Street to the northwest, San Francisco Bay to the northeast, Mission Creek to the southeast, and Division Street, 13th Street and U.S. Route 101 (Central Freeway) to the southwest. It is the part of the city in which the street grid runs parallel and perpendicular to Market Street. The neighborhood includes many smaller sub-neighborhoods such as: South Park, Yerba Buena, South Beach, and Financial District South (part of the Financial District), and overlaps with several others, notably Mission Bay, and the Mission District.

As with many neighborhoods, the precise boundaries of the South of Market area are fuzzy and can vary widely depending on the authority cited. From 1848 until the construction of the Central Freeway in the 1950s, 9th Street (formerly known as Johnston Street) was the official (and generally recognized) boundary between SoMa and the Mission District. Since the 1950s, the boundary has been either 10th Street, 11th Street, or the Central Freeway. Similarly, the entire Mission Bay neighborhood may or may not be counted as part of SoMa, Excluding the entire Mission Bay neighborhood puts the southeastern boundary at Townsend. Redevelopment agencies, social service agencies, and community activists frequently exclude the more prosperous areas between the waterfront and 3rd Street. Some social service agencies and nonprofits count the economically distressed area around 6th, 7th, and 8th streets as part of the Mid-Market Corridor.

The terms "South of Market" and "SoMa" refer to both a comparatively large district of the city as well as a much smaller neighborhood. The smaller neighborhood apparently consists of the largest contiguous portion of the South of Market area that, at any given point in time, is in the early stages of gentrification, and still retains much of the older character of the larger district.

While many San Franciscans refer to the neighborhood by its full name, South of Market, there is a trend to shorten the name to SOMA or SoMa, probably in reference to SoHo (South of Houston) in New York City, and, in turn, Soho in London.

Since 1847, the official name of the South of Market area has been the "100 Vara Survey" (alternately "100 Vara District") or simply "100 Vara" for short (with "100" sometimes spelled out). Since the mid-20th century, the official name has been gradually forgotten, and today is found mainly in history books, legal documents, title deeds, and civil engineering reports.

In 1847 Washington A. Bartlett, alcalde (magistrate) of the pueblo (village) of San Francisco, commissioned surveyor Jasper O'Farrell to extend the boundaries of the pueblo in a southerly direction by creating a new subdivision. At the time, the streets of San Francisco were aligned approximately with the compass points, running north to south, or east to west. Each block was divided into six lots 50 varas on a side. (A vara is about 33 inches (84 cm).) O'Farrell decided that the streets in the new subdivision should run parallel with or perpendicular to the only existing road in the area, Mission Road (later Mission Street), and thus be aligned with the half-points of the compass, i.e., northeast to southwest, and northwest to southeast. He also decided to make the new blocks twice as long and twice as wide, with each lot 100 varas on a side. Finally, O'Farrell created "a grand promenade" linking the old pueblo with the new subdivision, Market Street. Since then, downtown San Francisco north of Lower Market Street has been officially known as 50 Vara, while the South of Market area is officially known as 100 Vara.

During the mid-19th century, SOMA became a burgeoning pioneer community, consisting largely of low-density residential buildings, except for a business district that developed along 2nd and 3rd streets, and emerging industrial areas near the waterfront. Rincon Hill became an enclave for the wealthy, while nearby South Park became an enclave for the upper middle class. By the early 20th century, heavy industrial development due to its proximity to the docks of San Francisco Bay, coupled with the advent of cable cars, had driven the wealthy over to Nob Hill and points west. The neighborhood became a largely working-class and lower-middle-class community of recent European immigrants, sweatshops, power stations, flophouses, and factories.

The 1906 earthquake completely destroyed the area, and many of the quake's fatalities occurred there. Following the quake, the area was rebuilt with wider than usual streets, as the focus was on the development of light to heavy industry. The construction of the Bay Bridge and U.S. Route 101 during the 1930s saw large swaths of the area demolished, including most of the original Rincon Hill.

From the late 19th century to the mid-20th century, the South of Market area was served by several streetcar lines owned by the Market Street Railway Company, including the No. 14 Mission Street electric railway line, the No. 27 Bryant Street line, the 28 Harrison, 35 Howard, 36 Folsom, 41 Second and Market, and the No. 42 First and Fifth Street line.

Throughout the 1940s and 1950s, South of Market was home not only to warehousing and light industry, but also to a sizable population of transients, seamen, other working men living in hotels, and a working-class residential population in old Victorian buildings on smaller side streets and alleyways giving it a "skid row" reputation.

The waterfront redevelopment of the Embarcadero in the 1950s pushed a new population into this area in the 1960s, the incipient gay community, and the leather community in particular. From 1962 until 1982, the gay community grew and thrived throughout South of Market, most visibly along Folsom Street, since it was a warehouse area that was largely deserted at night.

In 1984, as these spaces for the gay community were rapidly closing, a coalition of housing activists and community organizers started the Folsom Street Fair, in order to enhance the visibility of the community at a time when people in City Hall and elsewhere were apt to think it had gone away. The fair also provided a means for much-needed fundraising, and created opportunities for members of the leather community to connect to services and vital information (e.g., regarding safer sex) which bathhouses and bars might otherwise have been ideally situated to distribute.

Redevelopment plans were first outlined in 1953. These plans began to be realized in the late 1970s and in the early 1980s with the construction of the conference center, Moscone Center, which occupies three blocks and hosts many major trade shows. Moscone South opened its doors in December 1981. Moscone North opened in May 1992, and most recently Moscone West in June 2003.

With the opening of the San Francisco Museum of Modern Art in 1995, the Mission and Howard Street area of the South of Market has become a hub for museums and performances spaces.

During the late 1990s, the occupant of the "live-work" loft was more likely to be a "dot-commie", as South of Market became a local center of the dot-com boom, due to its central location, space for infill housing development, and spaces readily converted into offices. 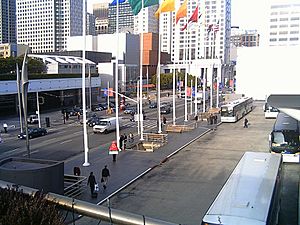 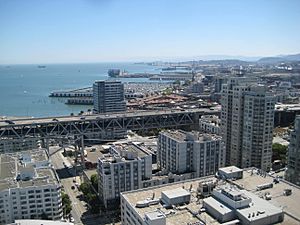 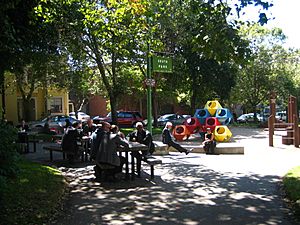 South Park in the SOMA District

A major transformation of the neighborhood was conceived during the 2000s with the Transbay Terminal Replacement Project, which broke ground in August 2010, and is planned to be open by 2017. In addition, new high rise residential projects like One Rincon Hill, 300 Spear Street, and Millennium Tower are transforming the San Francisco skyline. In 2005, the Transbay Joint Powers Authority proposed to raise height limits around the new Transbay Terminal. This led to proposals for more supertall buildings, such as Renzo Piano's proposal for a group of towers that includes two 1,200-foot. (366 m) towers, two 900-foot (274 m) towers, and a 600-foot (183 m) tower. The 1,200-foot (366 m) towers would have been the tallest buildings in the United States outside of New York City and Chicago. Renzo Piano's complex has since been cancelled, and replaced by a newer project entitled 50 First Street, to be designed by Skidmore, Owings & Merrill (SOM). In addition, the Cesar Pelli and Hines Group have also proposed another 1,070-foot (366 m), 61-story office tower. The Salesforce Tower, formerly named the Transbay Tower, as it is referred to, is under construction, and will be completed by 2017 at the earliest.

The neighborhood consists of warehouses, auto repair shops, nightclubs, residential hotels, art spaces, loft apartments, furniture showrooms, condominiums and technology companies. A major children's park was also built for the area on top of Moscone South. The park features a large play area, an ice skating rink, a bowling alley, a restaurant, the Children's Creativity Museum and the restored carousel from Playland-At-the-Beach. The children's park and Children's Creativity Museum are joined to the Yerba Buena Gardens by a footbridge.

Many small theater companies and venues are situated in the SOMA, including the Lamplighters, The Garage, Theatre Rhinoceros, Boxcar Theater, Crowded Fire Theater, and FoolsFURY Theater,

The local Academy of Art University owns several buildings in the neighborhood, primarily for academic and administrative purposes.

Due to the area's gay rights history, the Folsom Street Fair is held on Folsom St between 7th and 12th Streets (now between 8th and 13th Streets). The smaller and less-commercialized leather subculture-oriented Up Your Alley Fair (commonly referred to as the Dore Alley Fair) is held in late July on and around Folsom St. Also home to the annual How Weird Street Faire featuring dancing and costumes, held in early May along seven city blocks including Howard and Second streets.

All content from Kiddle encyclopedia articles (including the article images and facts) can be freely used under Attribution-ShareAlike license, unless stated otherwise. Cite this article:
South of Market, San Francisco Facts for Kids. Kiddle Encyclopedia.