Sports in Louisville, Kentucky include amateur and professional sports in baseball, football, horse racing, horse shows, ice hockey, soccer and lacrosse. The city of Louisville and the Louisville metropolitan area have a sporting history from the mid-19th century to the present day. 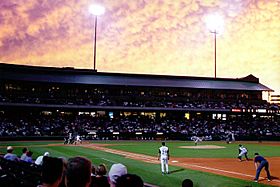 Besides racing there is the World's Championship Horse show. This show is mostly for Saddlebred horses and is held in conjunction with the Kentucky State Fair. This is the premier event of the year for Saddle seat Pleasure and Equitation.

Since 2007, Louisville has been host to the annual Ironman Louisville triathlon in August, one of only eight Ironman events in North America. In 2009, 2,352 participants finished the course.

In early 2012, Louisville became the first American city to ever host the UCI Masters Cyclocross World Championships, and the following year became the first American city to host the Masters, Juniors, U23, and Professionial Elite Women's and Men's UCI Cyclo-cross World Championships, the biggest races of the fastest growing form of bicycle racing. The event was held at a new permanent cyclocross course at Eva Bandman Park.

Louisville long ago hosted teams in the National Football League and Major League Baseball and fielded a strong franchise, the Kentucky Colonels, in the American Basketball Association before the ABA–NBA merger in June 1976. The Colonels won the penultimate ABA championship in 1975, defeating their archrival, the Indiana Pacers, in the 1975 ABA Finals.

The Kentucky Colonels were the winningest team in the history of the American Basketball Association, but the Colonels were not included in the ABA–NBA merger in June 1976. A later team with the same name played in Louisville in the ABA 2000 league but moved to Murray, Kentucky in 2007 before folding. Louisville and the corporate community had also attempted to pursue the Vancouver Grizzlies franchise before their ultimate move to Memphis in 2001, as well as the Charlotte Hornets franchise, which ultimately moved to New Orleans in 2002 but was revived in 2004 as the Charlotte Bobcats, regaining the Hornets name and the team's pre-relocation history in 2014.

Louisville is now home to five minor-league professional and semi-professional sports teams. The Louisville Bats are a baseball team playing in the Triple-A East as the Class AAA affiliate of the Cincinnati Reds. The team plays at Louisville Slugger Field at the edge of the city's downtown.

Louisville hosts two soccer teams. Louisville City FC began play in the United Soccer League in 2015, sharing Louisville Slugger Field with the Bats. Louisville City was the reserve side for Major League Soccer's Orlando City SC in 2015, but no longer fills that role after Orlando City launched a team-owned reserve side for the 2016 season. The Derby City Rovers, founded in 2010 as the River City Rovers, have played in the Premier Development League since 2011 but have since ceased operations as of July 2018 with no plans of returning to the pitch.

In October 2019, the National Women's Soccer League announced that it would award an expansion franchise to Louisville that would begin play at Lynn Family Stadium in 2021.

Louisville is also the home of Valhalla Golf Club which hosted the 1996, 2000, and 2014 PGA Championships, and hosted the 2008 Ryder Cup. It is also home to one of the top skateparks in the U.S., David Armstrong Extreme Park.

Louisville is also the home of Ohio Valley Wrestling, a professional wrestling promotion that at different times served as the official developmental territory for WWE (2000–2008) and TNA Wrestling (2011–2013). Many notable WWE performers trained in OVW, such as Jillian Hall, Randy Orton, John Cena, Batista, CM Punk, and The Spirit Squad (which included the wrestler now known as Dolph Ziggler).

All content from Kiddle encyclopedia articles (including the article images and facts) can be freely used under Attribution-ShareAlike license, unless stated otherwise. Cite this article:
Sports in Louisville, Kentucky Facts for Kids. Kiddle Encyclopedia.