The Priory Church of St Bartholomew the Great, sometimes abbreviated to Great St Bart's, is a medieaval church in the Church of England's Diocese of London located in Smithfield within the City of London. The building was founded as an Augustinian priory in 1123. It adjoins St Bartholomew's Hospital of the same foundation. 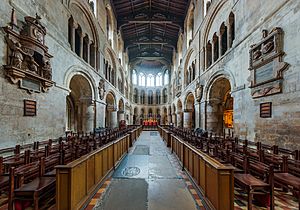 Interior facing east: sanctuary in centre with Sir Robert Chamberlayne's monument (1615) on the left wall, opposite a memorial tablet to Alderman Percival and Agnes Smallpace

The church was founded in 1123 by Rahere, a prebendary of St Paul's Cathedral and an Augustinian canon regular. While in Italy, he had a dream that a winged beast came and transported him to a high place, then relayed a message from "the High Trinity and...the court of Heaven" that he was to erect a church in the London suburb of Smithfield. Rahere travelled to London and was informed that the area in his vision—then a small cemetery—was royal property, and that nothing could be built upon it. Henry I, however, granted the title of the land to Rahere after he explained his divine message.

Rahere started construction on the building with the use of servants and child labourers, who collected stones from all over London.

The priory gained a reputation for curative powers, with many sick people filling its aisles, notably on 24 August (St Bartholomew's Day). Many miracles were attributed to occur within and without the walls of the building, including "a light sent from heaven" from its first foundation, and especially miraculous healings; many serious disabilities were claimed to be cured after a visit. Many of these cures were undertaken at the church hospital, the still existing St Bartholomew's Hospital. 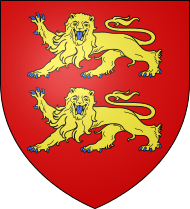 St Bartholomew the Great Priory Church's coat of arms (after its founding patron, Henry I)

While much of the hospital survived the Dissolution of the Monasteries, about half of the priory's church was ransacked before being demolished in 1543. Having escaped the Great Fire of London of 1666, the church fell into disrepair, becoming occupied by squatters in the 18th century. W. G. Grace, however, was one famous congregant before its restoration in the late 19th century, when it was rebuilt under Sir Aston Webb's direction. During Canon Edwin Savage's tenure as rector, the church was further restored at the cost of more than £60,000. The surviving building had comprised part of a priory adjoining St Bartholomew's Hospital, but its nave was pulled down up to the last bay but the crossing and choir survive largely intact from the Norman and later Middle Ages, enabling its continued use as a parish church. The church and some of the priory buildings were briefly used as the third Dominican friary (Black Friars) of London, refounded by Queen Mary I of England in 1556 and closed in 1559. Part of the main entrance to the church remains at West Smithfield, nowadays most easily recognisable by its half-timbered, late 16th-century, Tudor frontage built on the older (13th-century) stone arch. This adaptation may originally have been carried out by the Dominican friars in the 1550s, or by the post-Reformation patron of the advowson, Lord Rich, Lord Chancellor of England (1547–51). From this gatehouse to the west door of the church, the path leads along roughly where the south aisle of the nave formerly existed. Very little trace of its monastic buildings now survive.

In the early 1720s, at the suggestion of Governor of Pennsylvania Sir William Keith, 4th Baronet, Benjamin Franklin worked as a typesetter in a printer's shop in what is now the Church of St Bartholomew-the-Great. 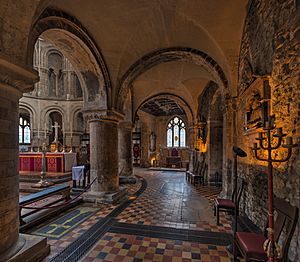 South aisle, looking east toward the sanctuary and Lady chapel

The Lady chapel at the east end had been previously used for commercial purposes and it was there that Benjamin Franklin worked for a year as a journeyman printer. The north transept was also formerly used as a blacksmith's forge.

The principal remaining area of the churchyard is a raised garden, which was laid out by the Metropolitan Public Gardens Association's landscape gardener Fanny Wilkinson in 1885.

In 1889, a restoration programme began which saw the restoration of the Lady Chapel and south transept and a new north transept. The restored south transept was opened by Frederick Temple, the Bishop of London, on 14 March 1891; and the south transept in February 1893 in the presence of the Albert Edward, the Prince of Wales, Alexandra of Denmark (the Princess of Wales), Edward White Benson (the Archbishop of Canterbury) and other dignitaries.

The Priory Church was one of the few City churches to escape damage during the Blitz and, in 1941, was where the 11th Duke of Devonshire and the Hon Deborah Mitford were married. 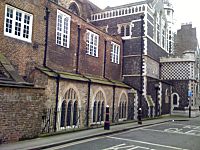 The poet and heritage campaigner Sir John Betjeman kept a flat opposite the churchyard on Cloth Fair. Betjeman considered the church to have the finest surviving Norman interior in London.

In 2005 a memorial service was held for Sir William Wallace, on the 700th anniversary of the Scottish hero's execution, organised by the historian David R. Ross.

Charitable distributions in the churchyard on Good Friday continue. A centuries-old tradition established when twenty-one sixpences were placed upon the gravestone of a woman stipulating that the bequest fund an annual distribution to twenty one widows in perpetuity, with freshly baked hot cross buns nowadays being given not only to widows but others.

The church was designated a Grade I listed building on 4 January 1950. In April 2007 it became the first Anglican parish church to charge an entrance fee to tourists not attending worship. 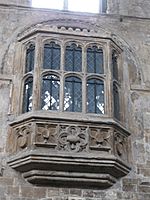 The oriel window was installed inside St Bartholomew the Great in the early 16th century by Prior William Bolton, allegedly so that he could keep an eye on the monks. The symbol in the centre panel is a crossbow "bolt" passing through a "tun" (or barrel), a rebus or pun on the name of the prior.

It may be doubtful whether Bolton, Prior of St Bartholomew, in Smithfield, was wiser when he invented for his name a bird-bolt through his Tun, or when he built him a house upon Harrow Hill, for fear of an inundation after a great conjunction of planets in the watery triplicity

The church served as the chapel of the Imperial Society of Knights Bachelor before the establishment of the society's permanent chapel in St Paul's Cathedral in 2005.

E. A. Webb's history of St Bartholomew-the-Great provides an account of each rector up to W. F. G. Sandwith. 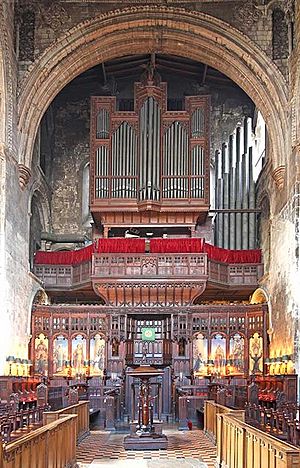 St Bartholomew the Great had an organ installed by John Knopple in 1715. This was superseded by an organ in 1731 from Richard Bridge. In 1886, it was replaced by the organ from St Stephen Walbrook which was installed by William Hill. Further modifications were made in 1931 by Henry Speechly & Son, in 1957 by N.P. Mander and in 1982–83 by the firm of Peter Wells. Specifications of the church's organ are detailed on the National Pipe Organ Register. Currently, the church is using a Viscount digital organ for services, but the process of acquiring a new instrument (an American Symphonic Pipe Organ built by Schoenstein & Co.) has begun.

Unusually for a parish church, the Priory Church Choir comprises professional singers; it is directed by Rupert Gough. A choir of amateur singers, the Rahere Singers, sings for some services.

In 2009 the roles of Organist and Director of Music were divided into two posts.

Organist and director of music

The ghost of Rahere is reputed to haunt the church, following an incident during repair work in the 19th century when the tomb was opened and a sandal removed. The sandal was returned to the church but not Rahere's foot, and Rahere since then, as a "shadowy, cowled figure appears from the gloom, brushes by astonished witnesses and fades slowly into thin air. Rahere is said to appear every year on the morning of July the 1st at 7 am, emerging from the Vestry".

The church's environs were also the location of many executions, especially during the reign of Mary Tudor. Reportedly during some nights there was a strong scent of burning flesh.

All content from Kiddle encyclopedia articles (including the article images and facts) can be freely used under Attribution-ShareAlike license, unless stated otherwise. Cite this article:
St Bartholomew-the-Great Facts for Kids. Kiddle Encyclopedia.