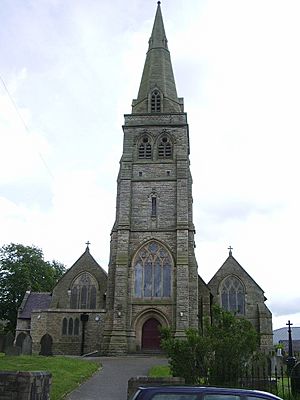 The church is constructed in local sandstone from Peel Quarry with a slate roof and bellcote. The church has a north porch and west spire. It is in the Early English Gothic style with Decorated details.

The church is built on projecting plinths and has a nave and four-bay aisles with separate roofs which terminate short of the nave at the west. The bays, are separated by buttresses and each has a pair of two-light windows above a continuous sill band. The two-bay chancel is higher than the nave and has a five-light east window. The four-stage west tower has angled buttresses and a west door above which is a four-light west window. The belfry has paired two-light openings under a broach spire set back behind a parapet. The spire is 165 feet (50 m) tall.

The nave arcade is carried on short cylindrical columns with moulded and decorated capitals. It has a hammer-beam roof and the wide chancel arch is supported on quatrefoil columns. The columns are made of Runcorn and Bath stone. The pierced stone chancel rail incorporates the pulpit made of gypsum or alabaster with green Connemara marble pillars carved into scenes from the life of St. Paul and the lectern with carvings of flowers and ferns and the head of a king at its base.

The church has a reredos made from carved alabaster thought to be from the Blue John mines in Derbyshire, timber pews and a baluster font from the old chapel. Some of the stained glass is by Shrigley and Hunt. There are several 18th and 19th-century wall plaques. A window made of painted and fired porcelain over the font is from the old Peel Chapel. A brass plaque from 1759 on the clergy vestry door, one of several pew plates saved from the old chapel, is inscribed "Geo. Kenyon Esq."

The churchyard contains the war graves of two service personnel of the First World War and nine of the Second World War.

Near the church porch is the grave of the Roscoe family, including the head of the family James Roscoe, who operated several local coal mines and lived at Kenyon Peel Hall.

All content from Kiddle encyclopedia articles (including the article images and facts) can be freely used under Attribution-ShareAlike license, unless stated otherwise. Cite this article:
St Paul's Church, Peel Facts for Kids. Kiddle Encyclopedia.