Stapleton is a neighborhood in northeastern Staten Island in New York City in the United States. It is located along the waterfront of Upper New York Bay, roughly bounded on the north by Tompkinsville at Grant Street, on the south by Clifton at Vanderbilt Avenue, and on the west by St. Paul's Avenue and Van Duzer Street, which form the border with the community of Grymes Hill.

Stapleton is one of the older waterfront neighborhoods of the borough, built in the 1830s on land once owned by the Vanderbilt family. It was a long-time commercial center of the island, but has struggled to revive after several decades of neglect following the 1964 construction of the Verrazzano-Narrows Bridge, which shifted the commercial development of the island to its interior.

Stapleton is part of Staten Island Community District 1 and its ZIP Codes are 10304 and 10301. Stapleton is patrolled by the 120th Precinct of the New York City Police Department.

The neighborhood was the site of the farm where Cornelius Vanderbilt grew up, at the location of the present-day Paramount Theater building on Bay Street (the theater itself having closed in the early 1980s). In the early 19th century it became the commercial center of Southfield Township. In 1832 William J. Staples, a merchant from Manhattan for whom the neighborhood is named, as well as Minthorne Tompkins, the son of Vice President Daniel D. Tompkins, acquired land from the Vanderbilts and laid out the streets. Staples and Tompkins started a ferry service from the neighborhood waterfront to Manhattan and began advertising their new village in 1836.

Seaman's Retreat, a hospital for sailors entering New York Harbor, opened in 1832 and later became Bayley Seton Hospital, the largest employer in the neighborhood until the Sisters of Charity, an order of Roman Catholic nuns which operated the facility, closed it in 2004. (The property is sometimes reckoned as being in Clifton, Stapleton's neighbor to the south.) It was also for many years the site of a United States Public Health Service hospital.

The neighborhood was the location of several springs which led to the establishment of several German-American breweries in the middle 19th century. The last brewery closed in 1963.

In 1884, it was incorporated as the village of Edgewater. The old Village Hall still stands, located in Tappen Park. Edgewater Village Hall and Tappen Park was added to the National Register of Historic Places in 1980. In 1884, the Staten Island Railway extended its track from the neighborhood northward to St. George. Direct ferry service from the neighborhood to Manhattan was halted two years later in 1886. The Staten Island Railway still has a stop in Stapleton.

Between 1929 and 1931, Stapleton had its own NFL pro football team, the Staten Island Stapletons.

In 1963, I.S.49, which sits across from the Stapleton Houses, opened. The Houses, a housing project sponsored by the State of New York, had opened two years earlier; at eight stories high, its buildings are the tallest to be found within any such project on the island, and is the largest New York City Housing Authority project on Staten Island.

In addition to the Edgewater Village Hall and Tappen Park, the Boardman–Mitchell House, Houses at 364 and 390 Van Duzer Street, and St. Paul's Memorial Church and Rectory are listed on the National Register of Historic Places.

The city built piers in 1920, but they were never fully exploited. From 1937 to 1942 several of the piers were used as the first Foreign Trade Zone in the United States. From 1942 to 1945, they became the Staten Island Terminal facility of the Army's New York Port of Embarkation. After World War II, the piers once again became a foreign trade zone, but their use declined and most of the piers were demolished by the 1970s. The last, used for fishing, was removed when the U.S. Navy proposed to build a base in Stapleton in the 1980s.

In 1983, Secretary of the Navy John Lehman selected Stapleton to be the homeport for a naval unit headed by the battleship USS Iowa (BB-61), as part of the dispersal of the navy during a military build up ordered by President Ronald Reagan. This proposal became highly controversial throughout Staten Island when analysis of the proposal showed a net loss of civilian jobs on Staten Island (mainly due to expected job-seekers among naval dependents, but also due to a loss of businesses forced out by the naval presence). It was also controversial because of the belief that the Tomahawk cruise missiles aboard the Iowa and an accompanying Aegis cruiser would, in at least some cases, be carrying nuclear warheads.

Following years of debate, which slowed development of the base, the 1991 dissolution of the Soviet Union led to a major cutback in military spending, and the still incomplete base was cancelled in 1993. Shortly thereafter, a plan was floated to build a race-track on the site, to be primarily used by NASCAR. The plan was quickly forgotten. Also headquartered at the site is one of three fireboats, FDNY Marine company 9. The site is now also used as part of the annual Fleet Week in New York City. After sitting empty for a couple of years, the base site was used by a bagel manufacturer briefly. Then a proposal was made to have a movie studio occupy a 6-acre (24,000 m2) portion of the site. For never-explained reasons the city administration opposed this, and finally some of the civil courts took over a small part of the site, leaving most unused while various proposals were made for housing, parkland, and an educational complex, among others.

On October 26, 2006, the New York City council approved a massive redevelopment plan for the site. It will be transformed into a new community with 350 housing units, restaurants, parks, a recreation center and farmers' market. The City Council pushed the project through its final regulatory hurdle when it approved the $66 million blueprint for the former Navy base. The city will use the money and an additional $1.1 million state grant to create streets, utilities and a mile-long waterfront esplanade while soliciting proposals from private developers to build on six sites—three residential and three commercial—across the 36-acre (150,000 m2) base. City officials have said infrastructure work could begin in early 2007 with a projected completion date of 2009. Demolition of the old Navy buildings began in late 2011.

On October 29, 2012, Hurricane Sandy threw the tanker John B. Caddell ashore on a vacant part of Front Street.

The entirety of Community District 1, which comprises Stapleton and other neighborhoods on the North Shore, had 181,484 inhabitants as of NYC Health's 2018 Community Health Profile, with an average life expectancy of 79.0 years. This is lower than the median life expectancy of 81.2 for all New York City neighborhoods. Most inhabitants are youth and middle-aged adults: 24% are between the ages of between 0–17, 27% between 25–44, and 26% between 45–64. The ratio of college-aged and elderly residents was lower, at 10% and 13% respectively.

The portions of the neighborhood around the Stapleton Houses have been predominantly Black for a while (though there has always been a noticeable White and Hispanic presence), while the areas further away have been a little bit more diverse. The overall neighborhood has seen a decrease in the White population, which reflects the overall trend of Whites moving back towards the city center (as well as those moving to newer suburbs further out). The local school, P.S. 14 (which has since become P.S. 78 due to P.S. 14's failing as a school) has seen a large increase in the Hispanic population, with the 2011–2012 school year being the first one in which Hispanics have made up the majority of the student body. This is reflective of the overall increase in the Hispanic population in the area. 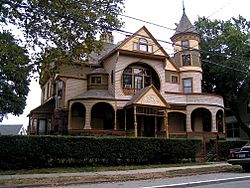 A Victorian home in Stapleton.

Stapleton, like much of the Island's north shore, has two major coexisting cultural spheres: that based in the old, standalone homes that have been in the area since the Victorian era, and that based in the public housing projects. As such, it is just as common to find Spanish bodegas and vibrant street art as winding roads, used book stores, and coffee shops.

Popular places for the performance of local music include The Full Cup, located on Van Duzer Street, and the Bay Street Saloon and Dock Street, both of which operate on Bay Street. In October 1980, the Paramount Theater began hosting acts such as The B-52s, the Talking Heads, Squeeze, the Dead Kennedys, Burning Spear and the Ramones, but it ceased functioning as a concert hall by the late 1980s. Other former venues include Beer Goggles and Martini Red, which is now known as The Hop Shoppe. The NYC Arts Cypher is located on Broad Street, and occasionally hosts hip-hop concerts, which distinguishes it from most other local venues, which cater mainly to rock and alternative bands.

In recent years the extreme sports scene has boomed on the Island. In July, 2012 5050 Skatepark was opened on Front Street across from the Homeport. 5050 Skatepark is New York City's only indoor skatepark, and one of the few skateparks open to BMX bikes, skateboarder, scooters, and rollerblades.

The neighborhood also lays claim to a huge diversity of restaurants, including an American-style diner, a Gastropub, as well as Sri Lankan, Mexican, and Italian eateries. Chain restaurants also have a presence, including Subway and McDonald's.

Due to its proximity to the Staten Island Ferry, Stapleton is well served by public transportation. The Staten Island Railway has a station of the same name at Prospect Street and Bay Street. Stapleton is also served by the S51, S52, S74, S76, S78, S81, S84, S86 local buses. Express bus service to and from Manhattan is provided by the SIM30 route. 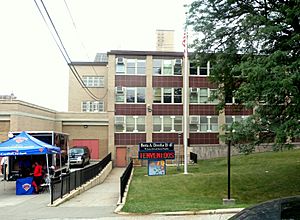 The Roman Catholic Archdiocese of New York operates Staten Island Catholic schools. Immaculate Conception School in Stapleton closed in 2013. The archdiocese stated that the number of students was too low and that the school could not receive enough income. It had 216 students in 2013. 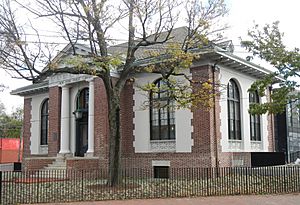 The New York Public Library (NYPL)'s Stapleton branch is located at 132 Canal Street at Wright Street. The Carrere & Hastings-designed Carnegie library was built in 1907. It underwent significant renovations and remodeling from 2011 to 2013, including the addition of a 7,600-square-foot (710 m2) building. A minor controversy arose over the discrepancy of architectural styles between the modernist black-glass addition and the original structure.

All content from Kiddle encyclopedia articles (including the article images and facts) can be freely used under Attribution-ShareAlike license, unless stated otherwise. Cite this article:
Stapleton, Staten Island Facts for Kids. Kiddle Encyclopedia.