Stephen A. Hurlbut facts for kids

Stephen Augustus Hurlbut (November 29, 1815 – March 27, 1882), was a politician, diplomat, and commander of the U.S. Army of the Gulf in the American Civil War. Hurlbut was present at the Battle of Shiloh and served under General Sherman during the Meridian Expedition. After the war he entered politics and served in various capacities, including Minister to Colombia and as a U.S. Congressman from Illinois.

Born in Charleston, South Carolina to Martin Luther Hurlbut and Lydia Bunce. His father was a Unitarian minister and educator. Hurlbut studied law with James L. Petigru as his mentor, worked for him as a law clerk, and was admitted to the South Carolina Bar in 1837. During the Second Seminole War, he served as adjutant of a South Carolina infantry regiment. In 1845, Hurlbut relocated to Illinois, where he established a law practice in Belvidere. He started his own family in 1847 after marrying Sophronia R. Stevens; she gave birth to two of his children.

In 1847, Hurlbut took part in the Illinois constitutional convention as a Whig delegate. He served as a presidential elector for the Whig Party in the 1848 Presidential Election, and became acquainted with Abraham Lincoln during campaigning for Old Rough and Ready Zachary Taylor. He was elected to the Illinois House of Representatives in 1859, and re-elected in 1861.

Hurlbut campaigned for Lincoln during the presidential election in 1860, and attended Lincoln's first inauguration on March 4, 1861. He and Colonel Ward H. Lamon performed a fact-finding mission on Lincoln's request, and visited Charleston on March 24–26, 1861, to investigate and report, "the actual state of feeling in this City & State." Lamon received a separate assignment from William H. Seward to visit Fort Sumter. On March 27, 1861, Hurlbut wrote a detailed report where he stated,

There is positively nothing to appeal to — the Sentiment of National Patriotism always feeble in Carolina, has been extinguished and overridden by the acknowledged doctrine of the paramount allegiance to the State. False political economy diligently taught for years has now become an axiom & merchants and business men believe and act upon the belief — that great growth of trade and expansion of material prosperity will & must follow the Establishment of a Southern Republic. They expect a golden era, when Charleston shall be a great commercial emporium & control for the South as New York does for the North. 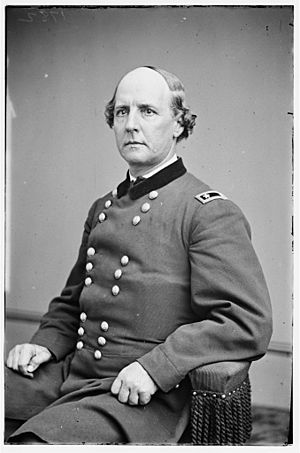 When the Civil War erupted, Hurlbut joined the Union Army and became a brigadier general, U.S. Volunteers, on May 17, 1861, and a major general on September 17, 1862.

He commanded the 4th Division, Army of the Tennessee at the Battle of Shiloh and in the advance towards Corinth and the subsequent siege. He also led a division at the Battle of Hatchie's Bridge, taking command of the entire Union force after Gen Edward Ord was wounded.

Hurlbut commanded XVI Corps from his headquarters at Memphis, Tennessee. It has been suggested by the historian Bertram Korn, that during his garrison duty at Memphis, Tennessee, Hurlbut issued antisemitic orders confiscating Jewish property and preventing Jews from trading.

Hurlbut led a corps under William T. Sherman in the 1864 Meridian expedition. He subsequently commanded the Department of the Gulf, succeeding Nathaniel P. Banks and serving in that capacity for the remainder of the war. Hurlbut was suspected of peculation during his term. General Edward R. S. Canby ordered to start court-martial proceeding and arrest Hurlbut. However, he was allowed to resign in June 1865.

After mustering out of the Union Army on June 20, 1865, Hurlbut became one of the founding fathers of the Grand Army of the Republic, of which he served as commander-in-chief from 1866 to 1868.

He was appointed Minister Resident to Colombia in 1869, where he served three years. In 1872, Hurlbut was elected to the U.S. House of Representatives as a Republican Congressman from Illinois. While re-elected for a second term in 1874, he was defeated in 1876. Hurlbut was made ambassador to Peru in 1881, and in that capacity had a row with General Hugh Judson Kilpatrick, U.S. minister to Chile during the War of the Pacific, as each had become a partisan of the country to which he was assigned as the U.S. diplomatic representatives. Hurlbut served as U.S. ambassador to Peru until his death in Lima in 1882.

Hurlbut and his spouse are buried together in Belvidere Cemetery, Belvidere, Illinois.

All content from Kiddle encyclopedia articles (including the article images and facts) can be freely used under Attribution-ShareAlike license, unless stated otherwise. Cite this article:
Stephen A. Hurlbut Facts for Kids. Kiddle Encyclopedia.