Stokesley is a small market town and civil parish in the Hambleton district of North Yorkshire, England. Historically part of the North Riding of Yorkshire, it lies on the River Leven. Stokesley is located about two miles south of the boundary of the borough of Middlesbrough and ten miles south of Middlesbrough town centre. Stokesley is located between Middlesbrough, Guisborough and Northallerton, in a farming area. Local attractions for visitors include nearby Great Ayton, as well as Captain Cook's monument and Roseberry Topping, both of which lie within the North York Moors National Park.

Stokesley was first granted a charter to hold fairs in 1223 by Henry III. The Pack Horse Bridge, crossing the River Leven from the riverside walk, dates from the 17th century. Renowned for its large range of building types, the latter construction within Stokesley of sundry fine Georgian architecture is thought to have contributed much to its later character. Other prominent historical features around the town include the Mill Wheel, thought to represent the site of a mill recorded in the Domesday Book of 1086. The famous survey, by William the Conqueror, also contained the first written record of "a church and priest" in Stokesley. The present Church of St Peter and St Paul - the oldest building in the town - has a later medieval tower and chancel, with a Georgian nave built around 1777: it is located just off the market Plain and has colourful twentieth century stained glass and some woodwork carved by the Mouseman of Kilburn.

Visitors to Stokesley today will find an intact historic high street, lined with many independent small shops and restaurants. Other facilities include a leisure centre with a swimming pool, a medium-sized supermarket, show-ground, camping site, health centre, industrial estate, library, police and fire stations. The town also has five pubs. Stokesley is also the home of Quorn, produced by Marlow Foods. There are many grade II listed buildings, including four Grade II* listed buildings of special architectural or historic interest. These are Barclays Bank, Handyside Cottage, the Manor House and the Old Rectory.

The inaugural meeting of the Stokesley Agricultural Society was held at the Golden Lion Hotel, now Chapters Hotel, in 1859. This boutique hotel was also used as the local law courts for the area being ideally placed between Middlesbrough and Northallerton. Stokesley Agricultural Show, first held in 1859, is held every year on the third Saturday in September. It is, perhaps, the largest one day show in England.

There is a weekly market held on a Friday in the main square called the Plain. A farmers' market takes place on the first Saturday of each month.

A four-day fair takes place every September in the town centre. The fair spans the full length of the high street and rides such as the KMG Equinox-Tango, the Extreme, Vertigo and various Crows rides attend. The fair always begins on a Wednesday evening and runs until the Saturday, opening all day on the Saturday due to the annual agricultural show which takes place on the showground. 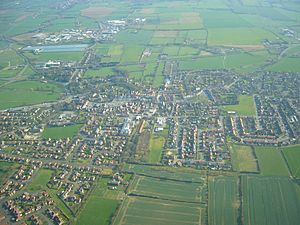 Stokesley is served by the Arriva service 28a from Middlesbrough every hour and the 81 from Marske Estate every hour.

On Fridays only there is also a bus to Kildale. On Wednesdays only the 27 runs to Whitby via the Esk Valley.

Stokesley was originally served by rail and had a railway station and extensive sidings on the Northallerton to Stockton branch. The station closed to passengers in June 1954, pre-dating the large scale closures of the Beeching era. Goods facilities remained until August 1965 when the line closed completely. The station was featured extensively in the British Transport film "A Farmer Moves South" in 1951, and now included in a DVD compilation. The nearest railway station is now at Great Ayton.

All content from Kiddle encyclopedia articles (including the article images and facts) can be freely used under Attribution-ShareAlike license, unless stated otherwise. Cite this article:
Stokesley Facts for Kids. Kiddle Encyclopedia.