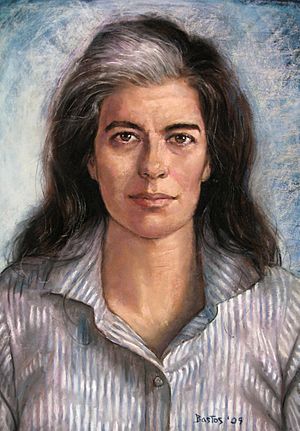 Susan Sontag (born Susan Rosenblatt, January 16, 1933 - December 28, 2004) was an American writer and political activist. Sontag was born in New York City to Jewish parents. She grew up in Tucson, Arizona and later in Los Angeles, California.

Sontag married writer Philip Rieff when she was 17. Sontag taught freshman English at the University of Connecticut for the 1952–53 academic year.

Sontag's first book, The Benefactor, was published in 1966. Her first film Duett för kannibaler was released in 1969. In 2000 she won the National Book Award.

She was openly bisexual. She married writer Philip Rieff (1922-2006) in 1950. Her only child is writer David Rieff (born 1952). The couple divorced in 1959. She was also partners with Cuban playwright María Irene Fornés.

She died of leukemia in New York City. She is buried in Montparnasse Cemetery in Paris, France.

All content from Kiddle encyclopedia articles (including the article images and facts) can be freely used under Attribution-ShareAlike license, unless stated otherwise. Cite this article:
Susan Sontag Facts for Kids. Kiddle Encyclopedia.