Teanaway Peak is a 6,779-foot (2,066-metre) mountain summit located in the Wenatchee Mountains, on the shared border of Kittitas County with Chelan County in Washington state. It is situated on the boundary of the Alpine Lakes Wilderness, on land managed by Wenatchee National Forest. Its nearest higher neighbor is Bills Peak, 0.72 mi (1.16 km) to the east. Precipitation runoff from the peak drains south into tributaries of the Teanaway River, or north into Turnpike Creek which is part of the Wenatchee River drainage basin. The view from the summit of this peak showcases the impressive Mount Stuart and Stuart Range for those who climb it. This peak also goes by the name "Genes Peak", which is for Gene Prater (1929–1993), the younger brother of Bill Prater, for whom Bills Peak was named. Gene was co-inventor of the modern aluminum snowshoe, and author of the seminal book, "Snowshoeing: From Novice to Master." Gene is also credited with first ascents of Sherpa Peak, Colchuck Balanced Rock, and the east summit of Ingalls Peak.

Lying east of the Cascade crest, the area around Teanaway Peak is a bit drier than areas to the west. Summers can bring warm temperatures and occasional thunderstorms. Most weather fronts originate in the Pacific Ocean, and travel east toward the Cascade Mountains. As fronts approach, they are forced upward by the peaks of the Cascade Range, causing them to drop their moisture in the form of rain or snowfall onto the Cascades (Orographic lift). As a result, the eastern slopes of the Cascades experience lower precipitation than the western slopes. During winter months, weather is usually cloudy, but, due to high pressure systems over the Pacific Ocean that intensify during summer months, there is often little or no cloud cover during the summer. 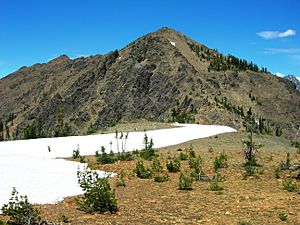 All content from Kiddle encyclopedia articles (including the article images and facts) can be freely used under Attribution-ShareAlike license, unless stated otherwise. Cite this article:
Teanaway Peak Facts for Kids. Kiddle Encyclopedia.