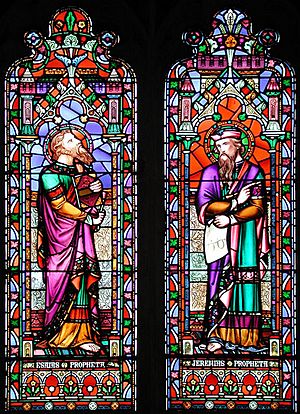 Tenterden is a town in the borough of Ashford in Kent, England. It stands on the edge of the remnant forest the Weald, overlooking the valley of the River Rother. It was a member of the Cinque Ports Confederation. Its riverside today is not navigable to large vessels and its status as a wool manufacturing centre has been lost. Tenterden has several voluntary organisations, some of which are listed below, a large conservation area and seven large or very old public houses within its area. It has long distance walking and cycling routes within its boundaries.

The first record of dwellings in Tenterden can be found in a charter which mentions that it, as 'Heronden', began to grow from the 14th century around the strong local wool industry. Unlike other such centres in the Weald it had the advantage of access to the sea. Much of what is now Romney Marsh was under water, and ships docked at nearby Smallhythe. Timber from the Wealden forests was used to construct ships, and in 1449 Tenterden was incorporated into the Confederation of Cinque Ports as a limb of Rye. Ships built in the town were then used to help Rye fulfil its quota for the Crown.

A school was in existence here in 1521; later (in 1666) it was referred to as a grammar school. Today Homewood School and Sixth Form Centre, a large secondary school catering for the Weald and south of Ashford Borough is in Tenterden.

In 1903, Tenterden Town railway station was opened. It closed in 1954, but half of it reopened in 1974 as the Kent and East Sussex Railway. The route starts at Tenterden Town Station and finishes at Bodiam station, near Bodiam Castle. The main line track is being extended to Robertsbridge (near Hastings) in East Sussex.

Tenterden is a nodal centre with routes radiating to Rolvenden and Hastings (A28), Wittersham and Rye (B2082), Appledore and New Romney (B2080), Woodchurch and Hamstreet (B2067) and Ashford and Maidstone (A28/A262). Tenterden has no mainline railway station, with the nearest being Headcorn (9 miles) and Ashford International (12 miles).

Tenterden's broad, tree-lined High Street offers a selection of shopping facilities, making the town an important destination for a number of smaller towns and villages in the area. It has a busy town centre which is home to many small boutiques and antique shops, as well as craft shops, book shops and various banks, side by side with larger national retailers. There is also a large Tesco which is accessible to pedestrians from the High Street (and by vehicles from Smallhythe Road), and a Waitrose store accessed by pedestrians from Sayers Lane (with vehicular access from Recreation Ground Road).

A number of local tourist attractions draw a great many visitors, especially the Kent & East Sussex Railway line to Bodiam, Chapel Down (a local vineyard which produces some highly acclaimed wines) and Smallhythe Place, which once belonged to the late Ellen Terry, which now holds both a museum and a theatre. Tenterden and District Museum is at the heart of the town, on Station Road.

The town also benefits from a leisure centre at the end of Recreation Ground Road, which was opened by Diana, Princess of Wales in 1990, run by Ashford Borough Council.

Its large and/or old pubs are generally owned by Kentish breweries and are:

The Tenterden Christmas Market is an annual event and in 2016 it is a 3 day event on the last weekend in November; Friday evening, and all day Saturday and Sunday, featuring beautiful Christmas lights, food, produce and craft stalls, Santa's Grotto, Christmas Carols and lots of entertainment. Ashford Borough Council supports the event by offering free parking in some of the town's car parks.

The May Fayre is arranged by Tenterden Town Council and is held every year on the May Bank Holiday Monday.

Tentertainment is a free music festival which is held on the first weekend in July. The first Tentertainment was mounted to coincide with the Tour de France coming through the town in 2007, and has been held every year since.

Tenterden Folk Festival is a four-day event held on the first weekend in October each year, and has been running for 21 years. A wide range of musicians take part in the event in a number of venues throughout the town, and a craft market is set up on the recreation ground and along the High Street. A highlight of the event is the procession, held on the Saturday, featuring Morris Dancers from across the country.

Tenterden hit the national headlines in August 2013, when it was proclaimed to be the first town in Britain to put up its Christmas lights. The lights had been erected in a tree 115 days before Christmas to publicise the Chamber of Commerce's efforts to raise the funds to replace the previous Christmas lights, which had gone missing in 2012.

Tenterden is twinned with the following places

All content from Kiddle encyclopedia articles (including the article images and facts) can be freely used under Attribution-ShareAlike license, unless stated otherwise. Cite this article:
Tenterden Facts for Kids. Kiddle Encyclopedia.