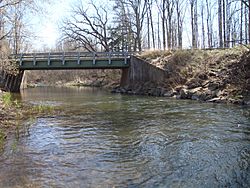 Towanda Creek is a tributary of the Susquehanna River in Bradford County, Pennsylvania, in the United States. It is approximately 32.9 miles (52.9 km) long and flows through Canton Township, Canton, Leroy Township, Franklin Township, and Monroe Township.

Towanda Creek begins on a hill in southwestern Canton Township, near the border between Bradford County and Lycoming County. The creek flows northwest off the hill and then turns north, flowing parallel to Pennsylvania Route 14. After several miles, it turns east and passes through the community of Canton and continues east. The creek then receives the tributary Mill Creek and shortly afterwards receives Alba Creek and Beech Flats Creek. It then enters Leroy Township, where it continues flowing east and slightly north parallel to Pennsylvania Route 50. In this township, the creek receives Wallace Brook and Gulf Brook. It eventually enters Franklin Township. In this township, the creek picks up North Branch Towanda Creek. Several miles downstream, it passes to the north of Naglee Mountain and enters Monroe Township. In this township, the creek picks up the tributary South Branch Towanda Creek and turns north. A short distance later, it turns northeast and enters the Towanda Flats. A few miles later, the creek reaches its confluence with the Susquehanna River.

There are a number of strainers and fallen trees on Towanda Creek in its upper reaches. The creek has fairly high mud banks and flows between forested mountains. Its valley becomes flat and wide downstream of Schrader Creek. There are some riffles on the creek and a few rocky patches near Franklindale.

The topography of the watershed of Towanda Creek is described as "rough and hilly" in a 1921 book. Most of the watershed consists of narrow valleys and steep hills that are rounded by glaciation.

The annual rate of precipitation in the watershed of Towanda Creek is between 30 inches (76 cm) and 40 inches (100 cm).

The watershed of Towanda Creek has an area of 278 square miles (720 km2). In addition to Bradford County, the watershed also occupies portions of Lycoming County, Sullivan County, and Tioga County. The creek's drainage basin is part of the Upper North Branch Susquehanna drainage basin.

Major lakes in the watershed of Towanda Creek include Lake Nephawin. This lake's surface area is 36.5 acres.

Towanda Creek is on private property throughout its length.

A gaging station was established on Towanda Creek at Monroeton in January 1914.

In 1921, the largest communities in the watershed of Towanda Creek included Canton, Monroeton, New Albany, and Monroe. Their populations were 1637, 500, 413, and 403, respectively.

In the early 1900s, the main industries in the watershed of Towanda Creek were woodworking, clay banks, machine shops, and agriculture. The Susquehanna, New York, and Lehigh Valley Railroad also passed through lower reaches of the watershed during this time period. The Northern Central Railroad passed through the watershed's upper reaches. The creek was also used as the power supply for a small mill in Canton.

There are some wild trout in Towanda Creek, but trout are also stocked there by the Pennsylvania Fish and Boat Commission. Warmwater fishes are more common in the lower reaches of the creek.

During a survey undertaken in 2007, a total of 33 species of fish were identified in Towanda Creek. Brown trout, brook trout, and rainbow trout are all present in the creek. Their lengths range from 2 to 19 inches (5.1 to 48.3 cm), 9 to 13 inches (23 to 33 cm), and 11 to 12 inches (28 to 30 cm), respectively. Smallmouth bass ranging from 1 to 14 inches (2.5 to 35.6 cm) long and rock bass ranging from 2 to 8 inches (5.1 to 20.3 cm) are also present. In addition, the creek contains seven shiner species, three dace species, three darter species, two minnow species (bluntnose minnow and cutlips minnow), and two chub species (creek chub and river chub). Other fish species inhabiting the creek include pumpkinseed, bluegill, green sunfish, brown bullhead, walleye, white sucker, northern hog sucker, fallfish, central stoneroller, and sculpin.

It is possible to canoe on 26.2 miles (42.2 km) of Towanda Creek during snowmelt or within seven days of heavy rain. The difficulty rating of the creek is 1 and is considered to be suitable for novice canoers. Edward Gertler describes the scenery along it as "good" in his book Keystone Canoeing. It is also possible to canoe on two of the creek's tributaries. In addition, angling is done on the creek.

All content from Kiddle encyclopedia articles (including the article images and facts) can be freely used under Attribution-ShareAlike license, unless stated otherwise. Cite this article:
Towanda Creek Facts for Kids. Kiddle Encyclopedia.