The American robin lives throughout North America. It is a rare vagrant to western Europe (a vagrant is a bird that is found outside its normal species' range). It has also been a vagrant to Greenland, Jamaica, Hispaniola, Puerto Rico, and Belize. The American robin can be found in many different kinds of habitats. It likes open areas of ground to feed and areas with trees or shrubs to breed and sleep. Because it has a large range, the IUCN Red List says that the American robin will not decline, and is listed as of least concern.

The American robin begins to breed shortly after returning to northern North America after spending the winter in the south. The female will choose where to build the nest. She will make the nest with grass, sticks, paper, feathers, rootlets, and moss. Once the nest is built, she will lay 3 to 5 eggs. After the chicks leave the nest, both parents will continue to take care of them, until they can live on their own.

American robin eggs and juveniles are eaten by squirrels, snakes, blue jays, common grackles, American crows, and common ravens. The adults are eaten by hawks, cats, and larger snakes. Sometimes, the brown-headed cowbird lays its eggs in the Robin's nest. This is called brood parasitism. However, the robin usually rejects the cowbird eggs.

This species was first described in 1766 by Linnaeus. It was described in the twelfth edition of his Systema naturae. He called it Turdus migratorius. 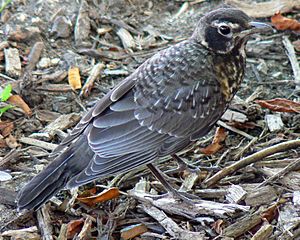 The American robin has seven subspecies. They are very hard to tell apart and they do breed with each other.

The American robin can be found all over North America. It is found from Alaska and Canada south to Mexico. Most American robins winter in Florida and the Gulf States to Mexico to the Pacific Coast. They will sometimes winter in southern Canada and the northern United States.

American robins are found in many different kinds of habitats. Some of them are gardens, parks, yards, fields, pastures, tundra, woodlands, pine forests, and shrublands. They like open areas of ground to feed. They like areas with trees or shrubs to breed and sleep.

American robins used to be killed for their meat. They were killed in the southern states. The meat was thought as a very good food. The American robin is now protected in the United State by the Migratory Bird Act. 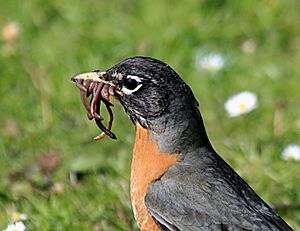 Juvenile robins spend their first four months of life near their nesting place. They then flock together with other American Robins before they migrate to their wintering places.

The American robin eats invertebrates. In the spring, they like to eat earthworms and snails. Some other invertebrates that American robins eat are beetles, grubs, and caterpillars. It will also eat fruits and berries. Some kinds of berries that they like to eat are chokecherries, hawthorn berries, dogwood berries, sumac fruits, and juniper berries. 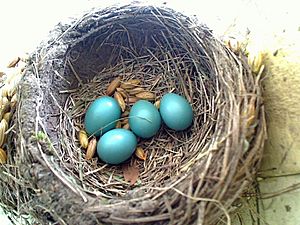 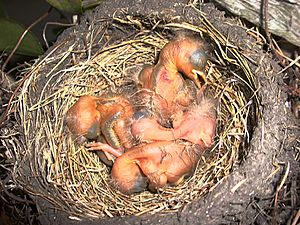 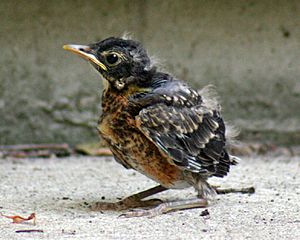 The American robin begins to breed shortly after returning to northern North America after spending the winter in the south. It is one of the first North American birds to lay eggs. It has two to three broods (a brood is a group of offspring) each breeding season. The breeding season starts in April and ends in July. It is one of the first birds to sing at dawn. Its song is made up of several small groups of sounds that are repeated.

For the first few days, the chicks have no feathers and their eyes are closed. The young live in the nest for about 13 days. As the chicks grow older, the female will protect them only at night and during bad weather. After the juveniles leave the nest, they will follow their parents around and beg them for food.

Both parents help feed and protect the fledged (fledged means a young bird that has just learned how to fly) juveniles until they can live on their own. The adults will give an alarm call to warn the juveniles that there is a predator near by. The parents will then attack the predator. Some of the predators they will attack are cats and dogs. They will even go after humans if the human gets close to their young. Fledged juveniles are only able to fly short distances. The coloring of the juveniles helps them hide better in bushes or trees. This kind of coloring is called camouflage.

Bird banders have found that only 25% of juvenile American robins live through their first year. The average life of an American Robin lasts about 2 years. The longest known lifespan of a wild American Robin is 14 years.

Eggs and juvenile robins that still live in the nest are eaten by squirrels and snakes. Some birds also eat eggs and juvenile robins. When feeding together in flocks, American robins will watch each other for signs of predators. If a predator is seen, they will make a warning call. Sometimes, the Brown-headed Cowbird lays its eggs in the robin's nest. This is called brood parasitism. The robin usually rejects the cowbird eggs. Because of this, brood parasitism by the cowbird is rare.

The American robin is the state bird of Connecticut, Michigan, and Wisconsin. It was also shown on a 1986 Canadian $2 note, but it is no longer on the bill.

There is color named after the American robin's eggs. It is called robin's egg blue.

All content from Kiddle encyclopedia articles (including the article images and facts) can be freely used under Attribution-ShareAlike license, unless stated otherwise. Cite this article:
American robin Facts for Kids. Kiddle Encyclopedia.