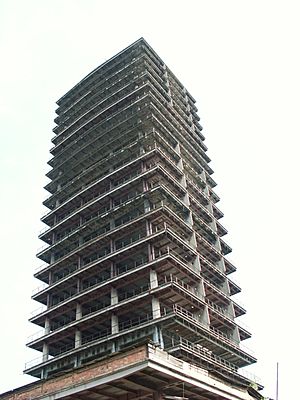 An unfinished building, the Szkieltor. Begun in 1975 it now costs too much to finish or destroy this building. 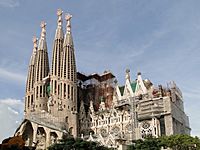 An unfinished building is a building that was being built, but was either abandoned or is on hold. There are many different reasons why buildings have not been completed. The National Monument in Scotland was planned to be a War Memorial for soldiers killed in the Napoleonic Wars. Building started in 1826, but the money ran out in 1829. The Sagrada Família, a church in Barcelona, Spain, was started in 1882 and is still not finished. It is not finished because when the architect, Antoni Gaudí, died in 1926 after he was hit by a tram, and he did not leave many plans for the building. What was left was destroyed during the Spanish Civil War. The war also meant that there was not enough money to complete the project.

All content from Kiddle encyclopedia articles (including the article images and facts) can be freely used under Attribution-ShareAlike license, unless stated otherwise. Cite this article:
Unfinished building Facts for Kids. Kiddle Encyclopedia.