The Boehlert Transportation Center at Union Station is a train station served by Amtrak and the Adirondack Scenic Railroad in Utica, New York. It is owned by Oneida County, and named for retired U.S. Rep. Sherwood Boehlert, R-New Hartford.

The station was built in the Italianate style and includes a rusticated granite first story with buff brick above. Symmetrically rectangular in plan, there are thirteen bays across the façade and fifteen on the side elevations. A brick parapet crowns the building; over the main entrance is a large clock flanked by eagle sculptures. The Utica station was added to the National Register of Historic Places in 1975.

Inside is a restaurant and a barber shop, one of the few barber shops in a train station today. The 15,000-square-foot (1,400 m2) waiting room's 47-foot-high (14 m) vaulted ceiling is supported by 34 marble columns. The station's blueprints called for the importing of columns that originally adorned Grand Central Station in New York City. Eight large benches are heated with steam pipes and vents.

A total of eight Amtrak trains use the station daily: two trains (one eastbound, one westbound) on the Lake Shore Limited, four trains (two in each direction) on the Empire Service, and two trains (one in each direction) on the Maple Leaf. In addition, the Adirondack Scenic Railroad operates a heritage railway from Utica to Holland Patent, Remsen, and Old Forge on a seasonal basis. 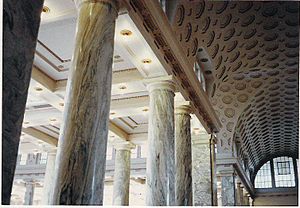 The station was built between 1912 and May 1914, replacing an older structure dating from 1869. The building was designed by New York architects Stem and Fellheimer. Construction involved the rerouting of the Mohawk River. The Mohawk River was relocated due to the risk of flooding and the proximity of the river to the railroad, which had become a problem for the expanding city. Built as a New York Central Railroad station, in 1915 it became tenanted by the Delaware, Lackawanna and Western Railroad and the New York, Ontario and Western Railway as well, those two companies abandoning their structures.

At one time, the waiting room also contained three ticket windows, an information office, 15 pay telephones, a Western Union office, two shoeshine stands, a bar and grill. The Western Union Office is no longer there.

As originally built, the station featured six island platforms with one alighting platform directly accessible from the station building, serving 12 tracks for New York Central Railroad trains; these were numbered 5 through 16 from south to north. (Tracks 1 and 2 were, respectively, the eastbound and westbound mainline for non-stop trains between Tracks 10 and 11, while Tracks 3 and 4 ran through the yards north of the station proper.) One additional dead-end island platform on the west side of the station building served the New York, Ontario and Western Railway (southern track) and Delaware, Lackawanna and Western Railroad (northern track), for a grand total of eight platforms serving 14 tracks. All platforms were linked by an underground passageway. The NYOW ended its passenger service into Union Station between 1921 and 1932.

Post-WWII reductions in passenger traffic led to service cuts and the eventual bankruptcy of the remaining railroads, the Lackawanna and the New York Central. The last Lackawanna trains bound for Norwich and Binghamton left in 1950. Into the mid-1950s sleeper cars from the North Star and into the early 1960s the Iroquois went to Lake Placid from Union Station. The final NYC trains from Lake Placid on the Adirondack Division were in 1965. By the late 1960s, only the mainline Water Level Route (the modern Amtrak Empire Corridor) continued to operate regular passenger service. Over time, all but the two centermost platforms were demolished, and the space originally occupied by the first seven station-side tracks was converted into passenger parking.

The station's restoration began in 1978, but refurbishing/restoration work continues to this day. The building is listed on the NRHP, both as a stand-alone item and as part of Bagg's Square East National Register Historic District.

The interior of the large waiting room features extensive use of marble columns and revetments with terrazzo flooring throughout. "The original waiting room benches, which ingeniously incorporate the heating system, remain in use."

As it currently exists, Union Station has one side platform (originally the third island platform), accessible directly from the parking lot, serving eastbound Amtrak trains on Track 2 (the former Track 10); and one island platform (slightly widened from its original dimensions) serving westbound Amtrak trains on Track 1 (former Track 11) and Adirondack Scenic Railroad trains on the northern side (former Track 13). These are linked by an aerial walkway, constructed during station renovations at the turn of the 21st century. 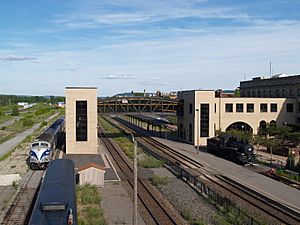 Bus companies serving the station, one of the first intermodal facilities in the state, include the following:

All content from Kiddle encyclopedia articles (including the article images and facts) can be freely used under Attribution-ShareAlike license, unless stated otherwise. Cite this article:
Union Station (Utica, New York) Facts for Kids. Kiddle Encyclopedia.