The Vombatiformes are one of the three suborders of the large marsupial order Diprotodontia. Seven of the nine known families within this suborder are extinct; only the families Phascolarctidae, with the koala, and Vombatidae, with three extant species of wombat, survive.

Among the extinct families are the Diprotodontidae, which includes Diprotodon, believed by many to be the inspiration for the bunyip. "Vombatiformes" is neo-Latin for "wombat-shaped things", and took its name from its type family.

The suborder Vombatiformes, with its closely related members and their compact body form, contrasts with the other two diprotodont suborders, the Macropodiformes: kangaroos, wallabies, and the quokka; and the Phalangeriformes: possums, including the gliders such as the wrist-winged gliders. The koala and wombats are believed by many biologists to share a common ancestor and to have diverged only recently in the Cenozoic.

In June 2020, Mukupirna nambensis, within its own family Mukupirnidae, was declared by scientists after studying fossils originally discovered in Lake Eyre in 1973, and rediscovered in a drawer in the American Natural History Museum in New York around 2010. The study revealed that the fossil represented the closest fossil relative of the wombat family, meaning that they all evolved from a common ancestor. Mukupirna means "big bones" in the Diyari and Malyangapa languages of the area where it was found. 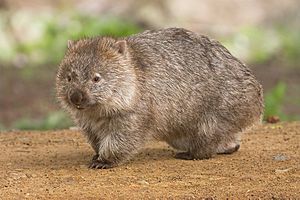 All content from Kiddle encyclopedia articles (including the article images and facts) can be freely used under Attribution-ShareAlike license, unless stated otherwise. Cite this article:
Vombatiformes Facts for Kids. Kiddle Encyclopedia.