Westport is a town in Essex County, New York, United States overlooking Lake Champlain. The population was 1,312 at the 2010 census.

The town is on the eastern border of the county and is 41 miles (66 km) south of Plattsburgh and 103 miles (166 km) south of Montreal. Westport is inside the Adirondack Park.

Westport is the birthplace of the Adirondack chair.

In 1642, Jesuit missionary Isaac Jogues was tortured by Iroquois at Coles Bay. He survived and was eventually saved by merchants from New Amsterdam.

The town was founded by William Gilliland in 1764 who surveyed an area in the southern part of the town and was granted 2,300 acres (9.3 km2); he also established the neighboring towns of Elizabethtown, named for his wife, and Willsboro. Gilliland originally called his patent "Bessboro" after his little daughter. The original settlement, which may have supplied wood to Benedict Arnold's troops, was completely destroyed during the American Revolutionary War in connection with British General John Burgoyne's march from Canada to Saratoga. The first permanent settlement was in 1785.

By the mid-nineteenth century, Westport was a fashionable resort town. Its social scene was regularly reported on in The New York Times and by the Boston press. Like many other East Coast resorts, its popularity gradually declined, starting in the 1930s, as first automobiles and then airplanes made possible a wider selection of vacation sites. Since the 1950s, however, Westport's lakeshore property has steadily increased in value. Although once most of the "summer people" stayed for weeks, now distinctions are not as clear: there are "year-round summer people" whose livelihood stems from outside Westport, weekenders whose principal residence is fairly close by (for example, Albany, which is two hours distant by car), and commuters to workplaces as distant as Plattsburgh, New York, or Middlebury, Vermont.

Westport is home to Camp Dudley, YMCA, the oldest summer camp in continuous operation in the United States, founded in 1885 by Sumner F. Dudley, who moved to Westport in 1891. Meadowmount, the summer school for string players founded by Ivan Galamian, is 8 miles (13 km) northwest of the center of town, in the town of Lewis. Westport is known as the ice fishing capital of Essex County.

Westport is home one of the only two professional theatres in the Adirondacks proper, the second being Pendragon Theatre in Saranac Lake. The Depot Theatre was founded in 1979, and operates out of the historic Amtrak railway station. The 136-seat, air-conditioned theatre hosts plays and musicals on its main stage during the summer months, as well as an annual gala. 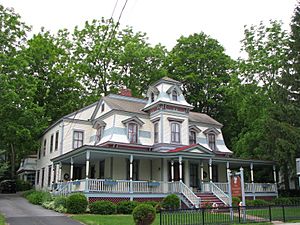 The Victorian Lady bed and breakfast, one of many historic houses in Westport

The east town line is formed by Lake Champlain and the border of Vermont. The town is inside the Adirondack Park.

Several sites on the Lake Champlain Birding Trail are located in Westport: 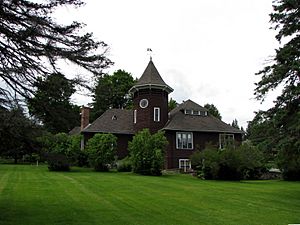 There were 593 households out of which 25.1% had children under the age of 18 living with them, 55.3% were married couples living together, 6.2% had a female householder with no husband present, and 35.6% were non-families. 29.3% of all households were made up of individuals and 12.8% had someone living alone who was 65 years of age or older. The average household size was 2.30 and the average family size was 2.83. 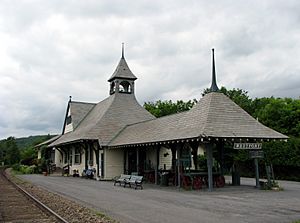 Amtrak, the national passenger rail system, provides service to Westport, operating its Adirondack daily in both directions between Montreal and New York City. A bus connection is available from Westport to Lake Placid. The Amtrak station also houses the Depot Theatre.

On August 28, 2006, at approximately 6:45 p.m. local time, a Greyhound bus traveling from New York City to Montreal overturned on the Adirondack Northway in Westport after suffering a blown tire, killing five and injuring 48.

Westport is in a rural area in the Adirondack Park, and so most of its access to medical care is via the ferry operated by Lake Champlain Transportation Company. The nearest emergency room is Elizabethtown Community Hospital, a 25-bed rural hospital 9 miles (14 km) to the west, with eight doctors on its active medical staff. About 30 miles (48 km) by car to the northeast in Burlington, accessible via ferry, is the emergency room of Fletcher Allen Hospital, a large, full-service hospital affiliated with the University of Vermont. During times when the ferry from Essex is not running, the nearest full-service emergency room is at CVPH Medical Center, in Plattsburgh, 41 miles (66 km) north of Westport. Slightly closer, though a slower drive over rural roads, is Porter Hospital in Middlebury, Vermont, accessible via the bridge at Crown Point.

Communities and locations in Westport

All content from Kiddle encyclopedia articles (including the article images and facts) can be freely used under Attribution-ShareAlike license, unless stated otherwise. Cite this article:
Westport, New York Facts for Kids. Kiddle Encyclopedia.