Walhalla is a small town in the foothills of the Blue Ridge Mountains in Oconee County, South Carolina, United States. It is located 16 miles (26 km) from Clemson University in Clemson, South Carolina. It is the home to the world-famous Steak House restaurant, a cafeteria style eatery which doesn't serve steak, but is famous because of its chicken. It lies within the area of the Blue Ridge Escarpment, and area of transition between mountains and piedmont, and contains numerous waterfalls. It was founded by German settlers in the late 1800s even though the area had long been settled by Scotch-Irish farmers. The population was 3,801 at the 2000 census. It is the county seat of Oconee County. The current mayor of Walhalla is Danny Edwards.

Walhalla began as a settlement of German immigrants who left from Hamburg, Germany and Bavaria with some English, Scots and Irish who came over in the same ship. In particular, General John A. Wagener, Claus Bullwinkel, John C. Henckel, Jacob Schroder, and Christopher F. Seeba (trustees of the German Colonization Society of Charleston) bought 17,859 acres (72.27 km2) of land for $27,000 from Reverend Joseph Grisham of West Union on December 24, 1849.

The town is built mostly on types of granite rock. It is also near some minor faults and therefore subject to small and infrequent earthquakes. The last nearby earthquake had its epicenter in Newry, South Carolina, and occurred at 7:42 am EDT on May 19, 1971. The earthquake had an intensity of VI (Strong) in Newry as measured by the Mercalli intensity scale. The cause of the Newry quake was likely a slippage of the Brevard Fault and other faults in the area aided by the immense weight of the man-made Lake Keowee, created by the Keowee Dam.

The Stumphouse Mountain Tunnel is located near Walhalla. Walhalla is a Germanic term referring to the 'hall' where warriors would go if selected to fight during Ragnarok. 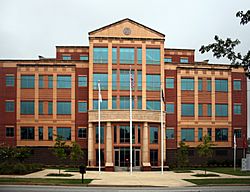 There were 1,558 households out of which 30.9% had children under the age of 18 living with them, 45.2% were married couples living together, 16.7% had a female householder with no husband present, and 34.0% were non-families. 30.9% of all households were made up of individuals and 15.6% had someone living alone who was 65 years of age or older. The average household size was 2.40 and the average family size was 2.98.

Due to its German heritage, Walhalla is also known for its annual Oktoberfest celebration, which begins on the third Friday of October each year. The festival takes on Main Street in Walhalla (Hwy 28) and on the city's Sertoma Field, located between the high school and downtown (Hwy 183). The festival includes art and craft vendors, music, dancing, specialty food vendors, Carnival rides, and other festive activities.

All content from Kiddle encyclopedia articles (including the article images and facts) can be freely used under Attribution-ShareAlike license, unless stated otherwise. Cite this article:
Walhalla, South Carolina Facts for Kids. Kiddle Encyclopedia.