Wicked Witch of the East facts for kids 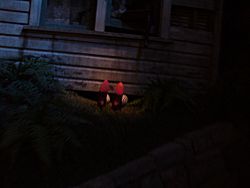 The extent of the Wicked Witch of the East seen in The Wizard of Oz as recreated in Disney's The Great Movie Ride.

The Wicked Witch of the East is a fictional character created by American author L. Frank Baum. She is a crucial character but appears only briefly in Baum's classic children's series of Oz novels, most notably The Wonderful Wizard of Oz (1900).

The Wicked Witch was a middle aged, malevolent woman who conquered and tyrannized the Munchkin Country in Oz's eastern quadrant, forcing the native Munchkins to slave for her night and day. Her charmed Silver Shoes (famously changed to magic ruby slippers in the 1939 film musical) held many mysterious powers and were her most precious and prized possession. The Witch met her demise when Dorothy Gale's farmhouse landed on her after being swept into the sky by a cyclone. Her old and withered body turned to dust, leaving behind the magical shoes which were passed to Dorothy as their new owner.

She had lived in a rather humble dwelling deep within the woods in a cottage located somewhere in Oz's eastern quadrant called Munchkin Country. She was bribed by an old woman who owned a beautiful Munchkin maid Nimmie Amee, who worked for her as a full-time servant, and happened to fall deeply in love with a local woodsman by the name of Nick Chopper, the woman gave her two sheep and a cow if the witch promised to prevent Nimmie Amee from marrying Nick and leaving the old woman, the Wicked Witch of the East resolved to enchant Nick Chopper's axe. The curse cast upon it tragically caused him to eventually turn into the Tin Woodman when he hacked all his own limbs off one by one, replacing the parts that were amputated with a hollow tin one, until he was all made of tin from his head to his feet. Once a man of tin with no human heart, Nick Chopper believed he no longer had the proper emotions that were required to love Nimmie Amee—much to the Wicked Witch's satisfaction. A year later, it was while the witch was out in the Munchkin meadows looking for herbs and spices to cast yet another one of her wicked spells, that Dorothy's falling farmhouse unexpectedly descended from the atmosphere and accidentally crushed her to death after it was released by a cyclone from Kansas —"Who was she?" asked Dorothy. "She was the Wicked Witch of the East, as I said," answered the little woman. "She has held all the Munchkins in bondage for many years, making them slave for her night and day. Now they are all set free, and are grateful to you for the favor."

She had helped certain Munchkins (such as Nimmie Amee's original mistress and the tinsmith Ku-Klip) with her witchcraft, under certain circumstances (usually at a reasonable cost). This demonstrates that she was a ruler who could be approached and propitiated, at least by some of her subjects. And among her exceedingly cruel actions was not just the enchantment of the woodman Nick Chopper's ax, but also Captain Fyter's sword, which caused him to turn into the Tin Soldier.

In most adaptations and references to the Wicked Witch of the East, it is usually in her famous appearance, under a house, with only her feet exposed. Notable recent exceptions are ABC's 2005 television film The Muppets' Wizard of Oz and Disney's 2013 theatrical film Oz the Great and Powerful. 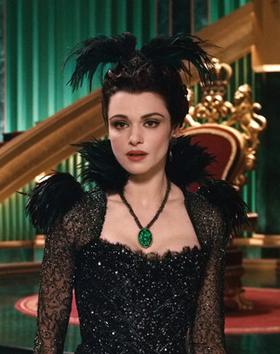 Rachel Weisz as Evanora in Oz the Great and Powerful

All content from Kiddle encyclopedia articles (including the article images and facts) can be freely used under Attribution-ShareAlike license, unless stated otherwise. Cite this article:
Wicked Witch of the East Facts for Kids. Kiddle Encyclopedia.