Yin Yang Yo! facts for kids

Yin Yang Yo! is an American–Canadian flash-animated television series created by Bob Boyle for Jetix. Produced by Jetix Animation Concepts as the third original Jetix show, it first aired on August 26, 2006 as a sneak peek and premiered on September 4, 2006 in the United States. The show debuted on Jetix in the United Kingdom on February 5, 2007 after a sneak peek preview on January 27, 2007 while making its Canadian television premiere on Family Channel on March 25, 2007. The series is supplied with writers and animators' staff associated with The Fairly OddParents, 6teen, Clone High and Danny Phantom. Head writer Steve Marmel, an anime fan, took an inspiration from various anime and anime-influenced shows such as Teen Titans and FLCL. The series centers on two anthropomorphic twin rabbits named Yin and Yang, and their sensei-like panda figure named Yo, a master of fictional mystical martial arts called Woo Foo.

In 2007, the show was nominated for British Academy Children's Award by the BAFTA in the International category, but lost to Nickelodeon and Hillenburg's SpongeBob SquarePants. From its launch on June 1, 2011 to late 2012, Disney XD Canada aired reruns of the series.

The show is about two 11-year-old rabbit twins named Yin and Yang, who train under Master Yo, a grumpy old panda who is eventually revealed to be their biological father despite their different species. They learn the sacred art of Woo Foo, a special type of martial arts that involves both might and magic. They must work together to save the world from evil villains and forces that want to destroy, corrupt or take it over. However, through all these adventures, Yin and Yang still portray stereotypical siblings; belligerently antagonistic but still ultimately caring about each other and working together if needed.

During the first season, the primary goal was to defeat the Night Master, a powerful enemy. During the second season, there are three primary storylines. The first one sees Yin and Yang trying to prevent other villains from being crowned the new Night Master. The second is Yang's own quest to find powerful mystic artifacts by some later-revealed-to-be villains: four evil heads who he thinks are the masters of Woo Foo. The third sees Yin and Yang against the original and reborn Night Master, Eradicus — ultimately trying to build a Woo Foo army to fight against his army.

The setting is in a town where its buildings have an Asian style. The residents are monsters, humanoids, robots and animals with human-like qualities and behaviors. The residents keep unusual pets like puppygriffs, creatures that are half puppy and half griffin, as well as real animals like dogs, cats, opossums or armadillos. Magic and martial arts still exist since ancient times when the Night Masters were around. It is revealed in Yin Yang You!, that the series takes place in another dimension. 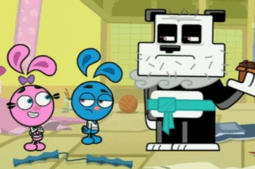 The series main characters from left to right: Yin, Yang and Master Yo.

The series was created by Bob Boyle II, an animator and storyboard artist previously working on Nickelodeon projects such as The Fairly OddParents and Danny Phantom. Influenced by his frequent trips to Little Tokyo, Bob developed the pilot for the series when his then-previous series Wow! Wow! Wubbzy! was in production. Once the series got the green-light, Bob initially worked simotanelously on development for the first season of both shows. Steve Marmel, a stand-up comedian and also writer for The Fairly OddParents and Danny Phantom, who known Boyle for years, was offered a long-term contract from Disney/Jetix to participate on the project upon request by Boyle, whom needed assistance on producing the show due to scheduling conflicts. Marmel, who would later create Sonny with a Chance and So Random!, drew influence from anime shows such as Gainax-produced FLCL (フリクリ, Furi Kuri), putting American anime-influenced animated shows like Teen Titans and Samurai Jack in the mix, using it as driving force to deliver comedy. Although a show directed at general audiences, especially children over 6 years old, with its mildly risqué innuendos it also targets adults as well.

"'They asked if I wanted to work on Bob's show because it was their first comedy. It was just a match. I'm working with a friend and I'm working with a genre that I love, anime. I don't think anybody's ever done a flat-out tweak on it for comedy purposes. There have been some tongue-in-cheek moments, but nobody's ever said 'We're going to play with this and make it our own," you know? Do to anime what Seinfeld did to comedy. "

For cost efficiency, the majority of pre-production for the series such as animation, voice recording and storyboards were done in Toronto. The majority of the character design direction was done by Mark Thornton and Todd Kaufman (co-creators of Grojband and Looped, and character designers for Total Drama).Although Bob Boyle II did not animate the series, the animation for the show is instead done by Elliott Animation, a Canadian animation studio previously working on the Teletoon original series 6teen as well as Wubbzy. An extra group of animators, whom work on revisions and interstitials, come from the Disney campus of Burbank in California, United States and Frederator Studios, producer of many Nickelodeon titles. As it's an American co-production by Disney, many actors that worked in Disney productions such as Kyle Massey, Orlando Brown, Jason Earles and Mitchell Musso guest voiced in the series.

The music for the show was provided by Michael Tavera, who also created music for Time Squad and ¡Mucha Lucha!. Many episodes of Yin Yang Yo! were directed by Ted Collyer (also director of Clone High), Chad Hicks (also director of Total Drama, and storyboard artist for Courage the Cowardly Dog) and John Fountain (as an animator, participated on Fairly OddParents, My Life as a Teenage Robot), while the main established writing force was Steve Marmel (also executive producer) with the help of Aydrea ten Bosch (ChalkZone), Eric Trueheart (Invader Zim), Sib Ventress (Danny Phantom). Chris Romano and Eric Falconer, responsible for Spike's Blue Mountain State and production of How I Met Your Mother and The Sarah Silverman Program also participated on the writing of various episodes. Staff writers Evan Gore & Heather Lombard who penned Futurama 's episode "Fear of a Bot Planet" (1ACV05), lately dedicated their work for Lilo & Stitch: The Series, participated in the creative process of Yin Yang Yo! as well. Van Partible, creator of Johnny Bravo, wrote the episode "Personality Problems".

All content from Kiddle encyclopedia articles (including the article images and facts) can be freely used under Attribution-ShareAlike license, unless stated otherwise. Cite this article:
Yin Yang Yo! Facts for Kids. Kiddle Encyclopedia.