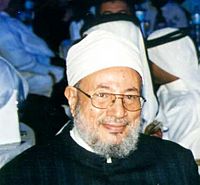 Yusuf al-Qaradawi (Arabic: يوسف القرضاوي Yūsuf al-Qaraḍāwī; or Yusuf al-Qardawi; born 9 September 1926) is an Egyptian-born Qatari Islamic theologian. He spent most of his life in Doha, Qatar. He is the chairman of the International Union of Muslim Scholars.

He is best known for his programme, al-Sharīʿa wa al-Ḥayāh ("Sharia and Life"), broadcast on Al Jazeera, which has an audience of 60 million worldwide. He is also well known for IslamOnline, a popular website he helped found in 1997 and for which he now serves as chief religious scholar.

All content from Kiddle encyclopedia articles (including the article images and facts) can be freely used under Attribution-ShareAlike license, unless stated otherwise. Cite this article:
Yusuf al-Qaradawi Facts for Kids. Kiddle Encyclopedia.