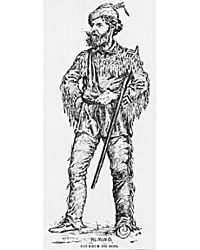 Bourgmont, a fugitive from justice, became a coureur des bois for several years during his early career.

Étienne de Veniard, Sieur de Bourgmont (April 1679 – 1734) was a French explorer. He wrote about his travels on the Missouri and Platte rivers in North America. He made the first European maps of these areas in the early 18th century. He wrote two accounts of his travels, which included descriptions of the Native American tribes he encountered. In 1723, he built Fort Orleans, the first European fort on the Missouri River, near the mouth of the Grand River and present-day Brunswick, Missouri. In 1724, he led an expedition to the Great Plains of Kansas to create trading relations with the Padouca (Apache Indians).

All content from Kiddle encyclopedia articles (including the article images and facts) can be freely used under Attribution-ShareAlike license, unless stated otherwise. Cite this article:
Étienne de Veniard, Sieur de Bourgmont Facts for Kids. Kiddle Encyclopedia.