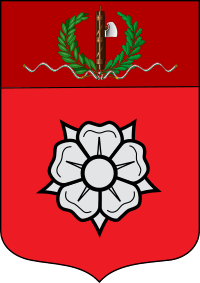 Coat of Arms of Addis Abeba governorate in 1940

Addis Abeba is the Italian name for the capital of Ethiopia (Addis Ababa), during the nearly six years when Ethiopia was in the Italian Empire (from 1935 to 1941).

The name "Addis Abeba" is related to the capital of Ethiopia during the more than five years of Italian occupation of Ethiopia. Addis Abeba grew from less than 45,000 in 1936 to nearly 150,000 inhabitants in spring 1941, when the Italians were defeated and the Allies (with emperor Selassie) returned to the city.

Soon after the conquest in early 1936, the city was improved with many structures, from paved roads to sewage systems. A new urban masterplan was studied for the city, that was approved in 1938 and by late 1940 Addis Abeba (where the Italian were more than one third of the inhabitants) was full of constructions (that were blocked because of WW2).

Addis Abeba was the administrative capital of the Scioa governorate in the Italian East Africa.

Because the Italian rule lasted just five years, only a few of the many Italian buildings & projects were completed: one was the Addis Abeba Stadium, inaugurated in spring 1940. Originally in 1937 it was called "Campo sportivo Littorio", while in 1940 it was enlarged with a tribune and the athletic lanes section.

In spring 1941 ceased to exist the Italian administration of Addis Abeba and most of the more than 40,000 Italians living in the city started to return to Italy.

All content from Kiddle encyclopedia articles (including the article images and facts) can be freely used under Attribution-ShareAlike license, unless stated otherwise. Cite this article:
Addis Abeba Facts for Kids. Kiddle Encyclopedia.