Admir Mehmedi (born 16 March 1991) is a Swiss professional footballer who plays as a second striker or centre forward for Bundesliga club VfL Wolfsburg.

Mehmedi was born in Gostivar, Macedonia. He is of Albanian heritage. At the age of 2, his family emigrated to Switzerland and he soon joined local side Bellinzona, before signing for FC Winterthur, from where Zürich scouted him. In 2006, he moved to Zürich. Mehmedi came through the youth system after being spotted as a youngster and joined the senior team in 2008.

Mehmedi began his senior career with FC Zürich at the age of 17. Within two years he was included in the first-team squad and by 2010 he was a first-team regular. He made his senior side debut on 20 July 2008 and scored two goals in eleven appearances, in addition to winning the Swiss Super League in his debut season with the club.

Being a first team regular in 2010, Mehmedi established himself as a physical striker, excellent in the box as well as having a good turn of pace, he was also technically great. During his time with Zürich, Mehmedi scored nineteen goals and provided nine assists.

In the January transfer window in 2012, Mehmedi moved to Dynamo Kyiv.

On 13 January 2012, Mehmedi signed for the Ukrainian club Dynamo Kyiv from FC Zürich on a five-year deal. During his season and a half with Kyiv, he mainly played coming off the bench. Seeking more playing time and to be included again in the Switzerland national team, Mehmedi moved to Bundesliga team SC Freiburg.

On 11 July 2013, Mehmedi moved to SC Freiburg initially to join on loan, although his contract also stipulates that Freiburg have an option to make the move permanent. Freiburg's acting sporting director Klemens Hartenbach stated that he was delighted the transfer went through. Hartenbach stated "He's a very versatile attacking player who understands the game and has already proven he can play at the highest level". On 26 May 2014, Freiburg decided to buy Mehmedi for a reported €6 million after having a good season, scoring 12 goals in 32 games during his loan spell with the Bundesliga side.

On 11 June 2015, Mehmedi joined Bayer Leverkusen after Freiburg was relegated from the Bundesliga. 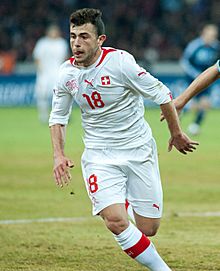 Mehmedi playing for Switzerland in 2012

Mehmedi was a crucial member of the Swiss U-21 side in the 2011 UEFA European Under-21 Football Championship. Mehmedi received the silver boot with three goals in the tournament and was selected in the UEFA Euro U-21 2011 Team of the Tournament. Along with Xherdan Shaqiri, Mehmedi was being tipped as the future of Swiss football.

Mehmedi was part of the Swiss team at the 2012 Summer Olympics.

Mehmedi made his debut for the Swiss national team against England, in a UEFA Euro 2012 qualifying match, coming on as a substitute. Mehmedi scored his first goal for Switzerland in his side's 5–3 win over Germany. The Swiss national side had not beaten the Germans since 1956.

On 15 June 2014, he replaced Valentin Stocker at half time in Switzerland's opening 2014 FIFA World Cup match against Ecuador. Two minutes later, he headed in Ricardo Rodríguez's corner to equalise as Switzerland eventually won 2–1.

Two years to the day after he scored in the 2014 World Cup against Ecuador, Mehmedi scored Switzerland's equaliser in their 1–1 group-stage draw against Romania in UEFA Euro 2016.

Following his participation in Switzerland's UEFA Euro 2020 campaign, in which they reached the quarter-finals for the first time, Mehmedi officially announced his retirement from the national side on 16 July 2021.

In 2016, Mehmedi visited Padalište, where he witnessed a family of six living in poverty. He gifted a house to the poor family in Macedonia, the country of his birth, stating: "You know, building a house is not cheap, but I appreciate what I have, and I want others to feel fine as well."

Mehmedi is married and has a son.

All content from Kiddle encyclopedia articles (including the article images and facts) can be freely used under Attribution-ShareAlike license, unless stated otherwise. Cite this article:
Admir Mehmedi Facts for Kids. Kiddle Encyclopedia.