Kids Encyclopedia Facts
This page is about the candy. For the film, see Airheads. 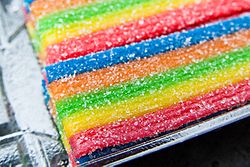 AirHeads are a taffy candy manufactured by Dutch-Italian company Perfetti Van Melle in Erlanger, Kentucky. Their texture and taste can be described as "tangy" and "chewy" They were created on August 7, 1985 by Steve Bruner. AirHeads are available nationwide in the United States and Canada while the candy is available in over 16 different flavors.

Perfetti Van Melle started living in Erlanger, Kentucky in 1979 and started making candy-based products three years later. It is a 120,000-square-foot factory that currently has 200 people working in it.

In December 2015, an explosion occurred at the factory, causing it to catch fire. Nobody was harmed in the explosion, but it prevented production for a period of time.

The candy comes individually wrapped in long colored strips, in a variety of flavors including:

It is also available in mini-size. Special edition flavors, such as Superman, SpongeBob and Spider-Man, are sold as promotions. "AirHeads Xtremes" are fruit rolls with a sour taste. AirHeads Pops are lollipops available in apple, blue raspberry, strawberry, cherry, watermelon, grape, strawberry kiwi and berry. In 2007, a new BerryHot flavor was introduced that claims to "heat up in your mouth." In 2008, "Chillin" flavors were released that have a minty "cold" feeling.

AirHeads Blue Mystery Blast bars were distributed to all travelers on JetBlue Airways on October 31, 2007, in honor of Halloween.

In June 2013, Airheads bites were released. They are tiny Airheads flavored morsels in a candy shell. The flavors included are: Cherry, Orange, Blue Raspberry, Watermelon, and Mystery. When they originally released, they came in a berry variety but that flavor has since been discontinued.

Airheads are made by creating long strips, similar to the method used to manufacture Play-Doh. The main ingredient is sugar.

AirHeads prides itself for being one of the few candy that uses taffy, allowing it to be shaped in various ways. Other taffy-like candy include Bit-O-Honey, Abba-Zaba, and Laffy Taffy.

It is run on a conveyor belt style, where the taffy goes through sugars and sweeteners leading up to the thinning, forming, and eventual packaging process. The machines stir about 3,000 pounds of taffy.

Airheads were originally sold across Canada and the United States but an expansion into the United Kingdom was announced in 2015. Airheads Xtremes and Bars are manufactured in the US and Airheads Pops in Mexico and Spain.

It was reported that Perfetti Van Melle spent $2.5 million for media exposure in 1999.

In 2000, Perfetti Van Melle started a partnership with Mattel to reach out the children all over the USA. The advertisements ran on children's programming networks like Fox Kids and Nickelodeon to continue AirHeads's already existing "Out of Control" campaign. The advertisements offered sweepstakes to Disneyland, as well as coupons on the back of AirHead packets for Mattel's X-V Xtreme Skateboarders.

In 2003, commercials started airing on Nickelodeon. Airheads.nick.com held a poll, advertising the green flavor, a trademark to the network.

All content from Kiddle encyclopedia articles (including the article images and facts) can be freely used under Attribution-ShareAlike license, unless stated otherwise. Cite this article:
AirHeads Facts for Kids. Kiddle Encyclopedia.