All Saints' Church is a 13th-century pilgrims' Grade I listed church in Boughton Aluph near Ashford, Kent. It is part of the Church of England.

Built in the thirteenth century by a man named Adulphus to replace a Saxon church, it was enlarged in the 14th century by Sir Thomas Aldon, one of Edward III of England's courtiers. The building was restored in 1878. On 27 November 1957, the Church was placed on the Statutory List of Buildings of Special Architectural or Historic Interest, as a Grade I building. In the late 1990s and early 2000s, it was extensively renovated, including the cleansing and restoration of the windows in 2009. The Church continues to be an active centre for worship, and is part of the United Wye Benefice. Every June, the building is used to host the Stour Music Festival. 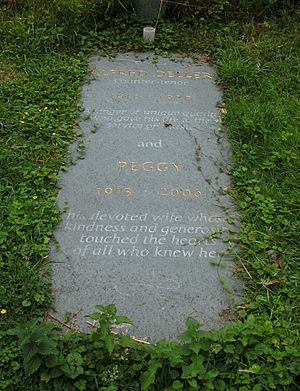 The present chancel and chapel are from the 13th century, with 15th century East Windows and a 17th-century porch. Most of the remainder of the church originates from the 14th century. The nave, aisles, transepts and crossing were all built together, between approximately 1329 and 1361 (based on heraldic evidence).

The church is primarily built from flint and rubble, with rubble and ashlar dressings. The porch and buttresses are brick constructions.

The church consists of a nave, aisles and a chancel. The chapel is in the North-east of the church, a crossing tower with a 2-stair turret. There are north and south porches. Both the chancel and the chapel are at a lower level than the transepts and crossing, with steps leading down to the east.

The West and North transept windows have a curvilinear design - as did the former south transept window - of 4 lights with cinquefoil over. The North aisle has two 3-light windows in brick while the South aisle has two 3-light windows in curvilinearstyle, all in plain chamfered surrounds. In the North chapel, there are two lancets to the west, and two paired lancets with quatrefoils over to east, while the chancel has a 3-light Perpendicular window and a 2-light curvilinear window on the south wall. The chancel east window is a 5-light perpendicular window, while the chapel east window is a 4-light perpendicular window. All of the windows possess the original reveals, as do all of the doors. The chancel south wall has two blocked window openings: the westernmost one is blocked by the stair turret while the easterly one is cut through by 14th century curvilinear window.

The South Transept window is a work of art by Leonie Seliger, commissioned in 2002, which replaced the original windows which was damaged by incendiary bombs in the Second World War. The window had been bricked up and concreted over in 1952. The money to pay for the new window was raised by the Stour Music Festival Appeal Fund in memory of its founder Alfred Deller and to commemorate the 40th anniversary of the founding of the Festival.

The West door is made of 18th century plank in a 14th-century roll-moulded surround between two large offset buttresses. The North door is a 17th-century plank with door-width plain metal hinges. The South door has been plastered over.

The nave has 4 bays with octagonal piers on moulded bases. The arches are double-chamfered. The crossing piers are a continuation of the nave arcade, although on a slightly larger scale, with crossing arches. All of the piers are made from chalk blocks. Over the west and the north doors, there are angular 4-centred arches. The arcade to the chancel has 3 round piers, various moulded and undercut capitals and 'water-holding' bases. The arches are similar double-chamfered ones as seen in the nave. The same style of arches are also used in the nave, and in the transept crossing arches.

The famous countertenor Alfred Deller, CBE (1912–1979) and his wife Peggy (1913–2006) are buried in the newer section of the churchyard. On 31 May 2012, All Saints' Church held a concert to celebrate Deller's 100th birthday during which James Bowman planted a tree in memory of Deller in the churchyard.

All content from Kiddle encyclopedia articles (including the article images and facts) can be freely used under Attribution-ShareAlike license, unless stated otherwise. Cite this article:
All Saints' Church, Boughton Aluph Facts for Kids. Kiddle Encyclopedia.