Alviso is a neighborhood in San Jose, Santa Clara County, California, and until 1968, it was an independent city of the same name. It is located approximately 1.5 miles (2.4 km) south of Drawbridge, at the north end of San José where it meets the southern end of the San Francisco Bay and borders the cities of Milpitas, Sunnyvale, and Santa Clara.

The Guadalupe River and Coyote Creek both end at Alviso, emptying into the Bay through Alviso Slough and Mud Slough. Alviso is the lowest point in the San Francisco Bay Area at 13 feet (4.0 m) below sea level. Throughout the 20th Century, Alviso has been victim to severe flooding most recently in 1983 and 1995.

Alviso was first settled in the 18th century. The community was named for Ignacio Alviso, the son of Corporal Domingo Alviso, one of the original members of the de Anza expedition. Corporal Alviso lived but a short time after reaching San Francisco and was buried March 11, 1777 Alviso's descendants were granted the Rancho Rincon de Los Esteros holding. In 1840, his descendant of the same name, Ignacio Alviso, moved from Mission Santa Clara de Asís to this 3,653 acres (14.78 km2) ranchero. From this port, beaver pelts, cattle hides and tallow went to San Francisco.

On October 16, 2010, Alviso celebrated the opening of the newly renovated marina with their first annual multicultural festival called "Day on the Bay". About 5,000 people were in attendance from all around the county. Activities included kayaking on the water and watching the entertainment on two stages, as well as fun activities for the children. The goals of the event were not limited to promoting the new city attraction but also to attract a diverse crowd to the outdoor recreational setting. With the popularity of the festival, Santa Clara County Supervisor Dave Cortese said he believes the event will be back again next October. 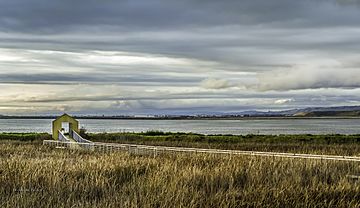 This 18.9 acres (76,000 m2) bayside park, though small in size, offers a great deal of activities within its boundaries and on into the Wildlife Refuge. A light dredging of the channel, a new boat ramp, two piers and parking lot were completed in time for the start of summer this year, giving boaters access to the bay again after a quarter of a century. Both the pathways and boardwalks of the County Park and trails around the ponds in the adjacent Wildlife Refuge offer fantastic views of the mountains surrounding the bay, and of the wildlife that call these ponds home.

Hiking, biking and bird watching are favorite activities in both the park and the refuge, while picnicking and strolling along the manicured pathways can be enjoyed within the County Park. Dogs are allowed in the County Park's pathways and picnic areas, but are not allowed on the trails, levees and boardwalks. While bikes are allowed on all pathways and trails in the park, please walk your bikes on the boardwalks. The launch ramp provides one of the few clear routes in the San Jose area through the salt marshes out to the open waters of the San Francisco Bay.

As of 2004, the Refuge spans 30,000 acres (120 km2) of open bay, salt pond, salt marsh, mudflat, upland and vernal pool habitats located throughout south San Francisco Bay. Located along the Pacific Flyway, the Refuge hosts over 280 species of birds each year. Millions of shorebirds and waterfowl stop to refuel at the Refuge during the spring and fall migration. In addition to its seasonal visitors, the Refuge provides critical habitat to resident species like the endangered Ridgway's rail and salt marsh harvest mouse. Today, hundreds of thousands of people visit the Refuge each year to enjoy its diverse wildlife and habitats.

Alviso has a ghost town which is named Drawbridge. Hunters and fisherman came to the island by train in the 1870s, and many never left. By the 1920s, the autonomous population had grown to more than 400. And they had to fend for themselves, as there was no electricity or plumbing. But the community gradually faded away, as pollution and urbanization from the burgeoning valley destroyed the hunting and fishing industries. Several buildings are visible in the ghost town, though it is steadily sinking into the marshlands. Though there are no roads which lead to the town, it is visible from the side of Don Edwards San Francisco Bay National Wildlife Refuge, and accessible via the Union Pacific Railroad tracks which run through the remains of Drawbridge.

A geodesic dome house was built in 1974 before the big flood, when land was more affordable.

The Isleton Plant in Sacramento County was built in 1919 for canning spinach and asparagus, and in 1921, Bay Side began canning green, rather than white, asparagus. The Mayfield Plant in Santa Clara County was built around 1924. The Alviso plant was sold in 1936, but some of the innovative ideas developed by employees of Bay Side Canning Company are still used by most modern canneries.

All content from Kiddle encyclopedia articles (including the article images and facts) can be freely used under Attribution-ShareAlike license, unless stated otherwise. Cite this article:
Alviso, San Jose, California Facts for Kids. Kiddle Encyclopedia.