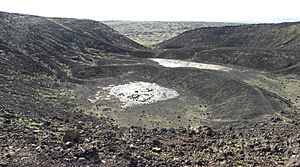 Interior of Amboy Crater showing a lava lake and the distant breach in the cinder cone rim. 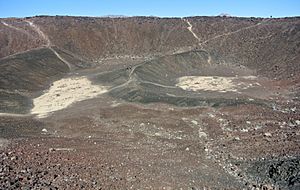 Interior of Amboy Crater from near breach showing lava lakes.

Amboy Crater is an extinct cinder cone volcano that rises above a 70-square-kilometer (27 sq mi) lava field in the eastern Mojave Desert of southern California, within Mojave Trails National Monument.

It is about 75 miles (120 km) equidistant from Barstow to the west and Needles to the east, and 1.5 miles (2.4 km) south of historic U.S. Route 66, near the town of Amboy in San Bernardino County. In 1973, Amboy Crater was designated the Amboy Crater National Natural Landmark. 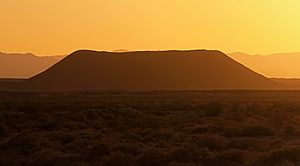 The crater's location is 2.5 miles (4.0 km) southwest of the town of Amboy and the Route 66-National Trails Highway. The Bullion Mountains are to the west, and the Bristol Mountains to the northeast.

This cinder cone is estimated to be 79,000 years old (+/- 5,000 years) and was formed in layers of mostly vesicular pahoehoe during the Pleistocene geological period. The interior has a lava lake. Lava flows as old as Amboy Crater itself blanket the surrounding area. The most recent eruption was approximately 10,000 years ago.

The crater is 944 ft (288 m) above sea level, about 250 ft (76 m) above the surrounding basalt lava plains. The scenic and solitary Amboy Crater was a popular sight and stop for travelers on U.S. Route 66 in California before the opening of Interstate 40 in 1973. Other than a stretch of U.S. Route 66 in New Mexico, Amboy Crater is one of just a few extinct volcanoes along the entire route, so generations of U.S. Route 66 travelers from the 1920s through the 1960s could boast that they had climbed a real volcano. Visits decreased after Interstate 40 opened, but have increased in recent years with the nearby Mitchell Caverns, Mojave National Preserve, and renewed historical tourism interest in "old Route 66".

The Federal Bureau of Land Management (BLM) recommends using the Western Cone Trail to reach the volcano peak's rim, a steep and rocky hiking trail. The trailhead is at the Amboy Crater day-use parking area, which provides shaded and open picnic tables and public restrooms. Regular desert precautions apply here: being alert for rattlesnakes and old military explosives, and having a hat, sunscreen, sturdy shoes and abundant drinking water. Educational and organized groups are advised to contact the BLM before going to Amboy Crater.

Amboy Crater was used as a location in the 1959 movie Journey to the Center of the Earth. Fires were set inside the crater to simulate a volcanic eruption. Amboy Crater was also featured in the Viceland network show Abandoned, Season 1, episode 6: "Route 66".

All content from Kiddle encyclopedia articles (including the article images and facts) can be freely used under Attribution-ShareAlike license, unless stated otherwise. Cite this article:
Amboy Crater Facts for Kids. Kiddle Encyclopedia.